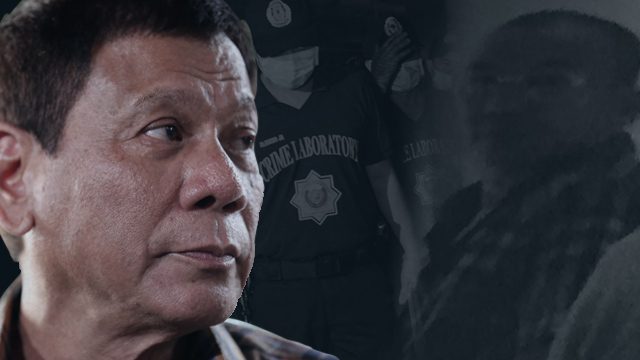 MANILA, Philippines – The bodies of suspected drug personalities are continuously piling up as the war on drugs by the administration of President Rodrigo Duterte intensifies.

As of Wednesday, August 31, 900 drug suspects have been killed in legitimate operations under the Philippine National Police’s (PNP) Double Barrel, data from the PNP show.

Latest PNP data as of August 22, meanwhile, show that over 1,160 have been killed outside police operations. This brings the total number of drug-related deaths to at least 2,160.

Meanwhile, 12,923 individuals have been arrested and 626,556 voluntarily surrendered within the same period.

Critics, however, say Duterte’s anti-illegal drugs campaign has yet to go all-out after the high-profile drug personalities – also the ones overseeing the drug trade in the country.

According to data from the PNP, as of August 22, 32 high-value targets (HTVs) and 34 local chief executives (LCEs) have been arrested. Some of these drug lords, however, have been given the chance to explain and undergo due process, while small fry – small-time drug users and pushers – were either killed or put behind bars, critics pointed out.

An instance of this was when individuals allegedly linked to the drug trade in the list Duterte read out were asked to “clear” their names. Not all were fortunate.

Rappler lists alleged drug lords killed – during legitimate operations or otherwise – under the Duterte administration starting July 1. This list will be constantly updated as the war on drugs continues:

Businessman Melvin “Boyet” Odicta Sr and his wife Merriam Regalado Odicta were killed by an unidentified gunman after disembarking from a passenger ship in Barangay Caticlan, Malay, Aklan on August 29.

A suspected drug lord in Iloilo City involved in drug trafficking, Odicta Sr is part of the watch list of drug personalities of the Philippine Drug Enforcement Agency (PDEA). (READ: War on drugs: Who are the Odictas of Iloilo?)

Their death came barely a week after the couple surrendered to Local Government Secretary Ismael “Mike” Sueno on August 25 to “clear their names.” PNP chief Director General Ronald dela Rosa, however, said he did receive surrender feelers from the couple.

Duterte said that the death of the Odictas was no surprise, stating that Melvin Odicta was “really being hunted.” Western Visayas regional director Chief Superintendent Jose Gentiles further said that the “protectors or big-time associates” of Odicta Sr were behind the killings since “both disclosed something when they visited [Sueno].”

Three Chinese inmates at the Davao Prison and Penal Farm (DPPF) were killed by Filipino inmates on August 16, 2016.

Li Lan Yan, Chu Kin Tung, and Wong Men Ping were stabbed to death while inside a bartolina (disciplinary chamber) in one of the biggest correctional facilities in the Philippines.

According to initial investigation by police, the 3 engaged in a heated debate with Filipino inmates over alleged drug transactions inside DPPF.

Tagged as a leader of a big group of illegal drugs syndicate, Li Lan Yan (alias Jackson Dy) was first arrested during a search and seizure operation in Parañaque City in 2003. He and his wife, Wang Li Na, faced drug-related cases in Parañaque City, Cavite, and Quezon City where they operated shabu laboratories.

The couple was convicted in May 2009 by a Parañaque court, but in February 2013, Li Lan Yan and Wang Li Na escaped from custody after more than 10 men intercepted their convoy while on their way to a court hearing in Cavite. The two were recaptured in July 2013 in San Juan City.

Chu Kin Tong (alias Tony Lim) and Wong Men Ping (alias Wang Ming Ping), meanwhile, were arrested in January 2010 for operating a shabu laboratory inside a posh village in Parañaque City. They were both convicted and sentenced to a double life sentence in 2014 with their Filipina househelp serving as government witness.

Two incidents where high-profile inmates were killed while in prison happened on August 11, 2016.

Alleged drug lord Edgar Alvarez inside the Abuyog Penal Colony in Leyte was killed during a raid conducted by the Criminal Investigation and Detection Group-Region 8.

The group was also supposed to serve a warrant to Alvarez when he drew his gun and fired at the police.

Alvarez, who was facing murder charges, was transferred from the New Bilibid Prison (NBP) to Leyte in 2014. The Department of Justice (DOJ) claimed he was one of the inmates “living in luxury” inside the NBP.

Meanwhile, in Metro Manila, an explosion in Parañaque City Jail killed 10 inmates and injured a jail warden. Out of the casualties, 8 were facing drug-related charges.

According to the police, the inmates were requesting to meet with the jail warden when gunshots and an explosion occurred. Investigations showed that the explosion was caused by a grenade.

Two of the casualties were Chinese nationalities named Jacky Huang and Yonghan Cai.

Huang was arrested in 2015 after almost a year since P170-million ($3.6 million)* worth of illegal drugs was discovered during a raid in a condominium unit in Parañaque City.

A suspected Chinese drug lord was gunned down by members of the PNP Anti-illegal Drugs Group on July 22, 2016.

Meco Tan, an alleged high-value drug lord, was killed by authorities after he attempted to escape, following the serving of an arrest warrant in Valenzuela City.

According to the police, Tan operated shabu laboratories in Cavite and in Quezon City, among others.

According to news reports, Bautista had just dropped off his wife and child in school when two men riding a motorcycle fired at him. Students and teachers who were attending the school’s flag ceremony heard the gunshots.

Belandres, according to Senior Inspector Ryan Jay Orapa of the Provincial Anti-Illegal Drugs Operations Task Group, was a bigtime drug supplier who has been under surveillance since 2003. He is also  considered a “level 2 pusher.”

He added that Belandres was part of the group of Cebu City drug lord Jeffrey “Jaguar” Diaz, who was killed in a police operation in Metro Manila on June 18. – Rappler.com

Do you have information to add to this list? Rappler is crowdsourcing information on the individuals suspected to be drug lords. Comment below or email investigative@rappler.com for confidential information. Or simply tag @rapplerdotcom on Twitter.