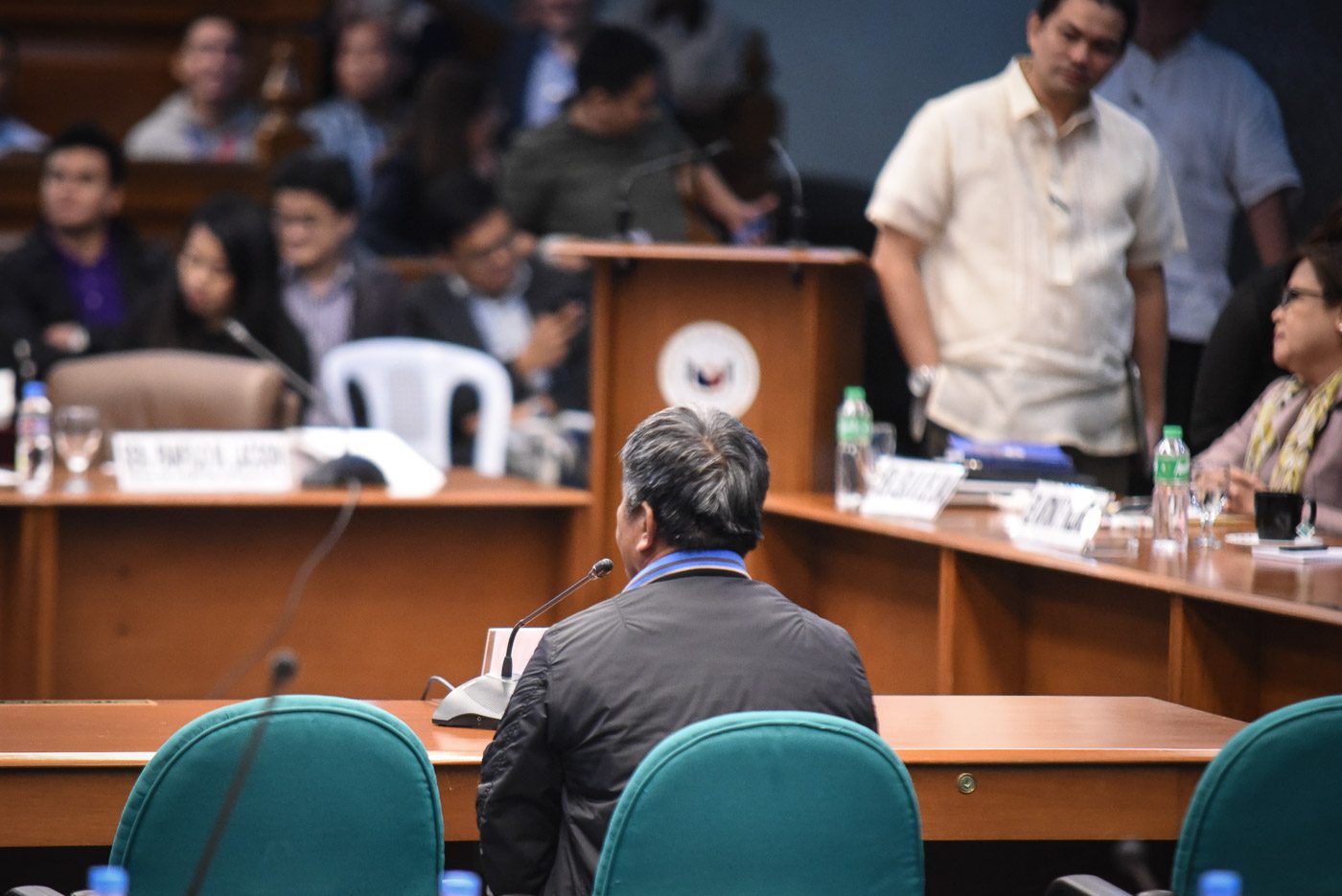 At the same time, many doubted his credibility because of the many “inconsistencies” in his narrations as an alleged former member of the Davao Death Squad (DDS).

Senators pointed to these inconsistencies as proof that Matobato’s stories were all “kuwentong kutsero (tall tales)”.

For instance, Senator Alan Peter Cayetano “tested” Matobato by asking him to point among an array of adhesive tapes to the “masking tape” the DDS allegedly used when they disposed of their dead victims. Cayetano included “packing tape” in the selection – this kind of tape was known to have been used in the murders, based on photos that had circulated on social media. But Matobato called it “masking tape”.

Netizens, however, were quick to point out that most people generally associate some objects with more common brands or names. For instance, most toothpaste are referred to as “Colgate” as baby diapers are called “Pampers”.

Besides the masking tape issue, other details, however, did not add up. We compared statements of Matobato to previously published news reports, interviews, and official documents to see what matched and what didn’t.

The Mosque bombing was done to retaliate against Muslims after the 1993 bombing of the San Pedro Cathedral, also known as the Davao Cathedral, in Davao City.

Matobato said he hurled a grenade at the Bangkerohan Mosque upon the orders of then mayor Duterte. “Umorder si Duterte na massacre-in ‘yung mosque ng mga Muslim (Duterte issued the order to destroy the mosque of the Muslims),” he said during the Senate hearing.

After the incident, Matobato said the group was ordered by Duterte to abduct and kill Muslims suspected to be behind the cathedral bombing. The victims, he added, were buried at a quarry owned by a certain Ben Laud.

The bombing incidents – both at the cathedral and mosque – did happen based on existing local and international news reports published in 1993.

The San Pedro Cathedral bombing happened during a December Mass in 1993, leaving at least 6 dead and injuring at least 130. A quick look at the history of bombings in Davao City, meanwhile, showed that the mosque bombing happened 8 hours after the cathedral bombing. News reports identified the perpetrators as “suspected Christian militants” who used two grenades to retaliate. The mosque, however, was not named in news reports about the incident.

However, Matobato’s account about the fate of the suspects of the cathedral bombing differs from what was documented in news reports.

He claimed that the DDS was able to abduct, kill, and bury the alleged perpetrators of the bombing, but a 1995 news report by the Union of Catholic Asian News (UCAN) said the alleged mastermind Sahib Ponso was arrested in September two years after the cathedral bombing. He was identified as an “urban terrorist force leader of Abu Sayyaf.”

A certain “Sali Makdum” was reportedly ordered “liquidated” by Duterte in 2002 because he was a suspected terrorist.

In his sworn affidavit submitted to the National Bureau of Investigation (NBI) in 2014, Matobato narrated that Makdum was a Pakistani who had no record with the Bureau of Immigration since he came to the Philippines “through backdoor entry from Malaysia.”

Matobato befriended the alleged terrorist over a span of 3 months. He was able to do so because Makdum’s girlfriend was his wife’s cousin.

After “months of knowing each other,” Makdum allegedly asked Matobato to look for land in the Island City of Samal so he could turn it into a livelihood training center. He also asked Matobato to purchase “100 units of Garand rifles, 50 M14 rifles, and 100 armalite rifles.”

Makdum was “arrested” on the second floor of the Penaplata Market and was brought to Barangay Ma-a, Davao City. According to Matobato, the group slit his throat and took turns stabbing him to death.

The operation, he claimed, was known by Philippine National Police (PNP) chief Ronald dela Rosa since he was head of Davao City’s Presidential Anti-Organized Crime Task Force (PAOCTF) at the time.

The death of Makdum was neither documented nor reported by local and national newspapers.

Makdum’s mother-in-law Lydia Marquez, in an interview with CNN Philippines last September 20, clarified that Makdum was Turkish, not Pakistani. A quick search online yielded the name “Makhdoom Faisal Saleh”, very close to “Sali Makdum”, but identified as a prominent former Pakistani minister, not a terrorist.

Marquez also said that Matobato once tried to sell a piece of land to Makdum. According to Marquez, Makdum was later abducted, not arrested, during a meeting with Matobato in his favorite eatery in Davao City. The transaction is consistent with the “sideline” or side job of Matobato as real estate “broker”, which he told Rappler about.

Matobato also claimed Dela Rosa headed PAOCTF-Davao. He was correct as Dela Rosa was PAOCTF Eastern Mindanao chief from 1991-2001. The task force was, however, abolished in 2001 under the administration of Gloria Macapagal Arroyo after some members were alleged to be involved in several major crimes.

After his stint with PAOCTF, Dela Rosa said he was assigned to Catitipan, Davao City and was sent to the PNP National Headquarters to work under the Directorate for Human Resource and Doctrine Development.

More than 10 years later, no one has been charged for the disappearance of Makdum.

He said that Duterte got fed up with Pala’s non-stop attacks against him in his radio shows.

The “operation team” that conducted the killing, Matobato narrated in his NBI affidavit in 2014, was composed of 5 people: SPO2 Jun Ayao, SPO2 Jun Larisma, and 3 civilian hitmen.

Jun Pala was a broadcast journalist who, according to Duterte, “deserved” his death. But it was not all rivalry between Duterte and Pala. The two used to be friends until a string of disagreements led to a bitter feud in 2001. (READ: Duterte’s ‘enemy’: Jun Pala)

As commentator of dxGo Aksyon Radyo, Pala often introduced himself as someone “who remains the voice of democracy in (Mayor Rodrigo) Duterte’s reign of terror.”

According to official reports, Pala was killed by unidentified men on board a motorcycle on September 6, 2003, while returning home from a friend’s house. The radio broadcaster sustained 9 gunshot wounds, mostly on his chest and head, and was pronounced dead on arrival at the San Pedro Hospital.

However, Davao journalist Jun Ledesma told Rappler in an earlier interview that Pala made a lot of enemies during his time – from businessmen to politicians – adding that he even tried to seek help from Duterte 3 days before he was killed.

But one thing is clear: 13 years later, no person has been arrested or charged over Pala’s death. Similar to the Makdum case.

Matobato claimed that Duterte and the DDS were also behind the deaths of supporters of ex-Speaker Prospero Nograles during the 2010 elections.

It happened during the heated race between Nograles and Duterte’s daughter, Sara Duterte-Carpio, for the mayoral position in Davao City. The elder Duterte, meanwhile, ran and eventually won as vice mayor due to term limitations.

In his NBI affidavit in 2014, however, Matobato recalled that the killings occurred in 2009. He also said in the same sworn statement and narration at the Senate that cement hollow blocks were used to help sink the bodies underwater. During an interview with Rappler, however, he said that they used hydraulic jacks.

But amid conflicting claims, Matobato was consistent in pinning the blame on Duterte.

Nograles contradicted the statement of the Matobato, saying that there was “not a single incident” where a staff or security personnel of his was killed. However, during the Holy Week of 2010, 4 bodies were found in several areas within and near Davao City. (READ: Nograles ‘supporters’ killed by Davao Death Squad in 2010?)

News reports identified two of the bodies to be of Juliana “Nanay Juling” Noquera and Ronald “Ka Onald” Miranda. Both their hands were tied with nylon cords, heads wrapped with packing tape, their bodies with multiple stab wounds, and attached hydraulic jacks.

The two were also allegedly part of retired Jovito Palparan’s Bantay party-list group. However, Arthur Tariman, former national media officer of Alliance for Nationalism and Democracy (ANAD) partylist, told Rappler that Miranda was one of the men Palparan sent to provide support to Nograles during the 2010 elections.

Although not directly controlled by the ex-Speaker, Tariman said that their group was working closely with them in a “tactical alliance” against the New People’s Army (NPA). Noquera was the supposed contact of Palparan’s group in an NPA-infested area in Davao City and was “an original leader in Nograles’ camp,” according to Tariman.

More than 6 years later, no one has been arrested or charged over the brutal murders.

According to Matobato, Cebu wealthy businessman Richard King was shot at close range at a McDonald’s restaurant in Obrero, Davao City on June 12, 2014.

King’s death was ordered because he and Vice Mayor Paolo Duterte were allegedly “rivals” over a woman. He later said that those who carried out the actual killing were two rebel returnees who were eventually killed.

Matobato, meanwhile, told Rappler that he was also implicated in the killing since he had already expressed his intent to stop “working” with the so-called Davao Death Squad. He was arrested and charged for having an expired permit to carry firearms outside residence (PTCFOR). He was allegedly tortured while imprisoned; he was eventually able to post bail.

Contrary to what Matobato said about King being killed inside a popular fast food restaurant, news in 2014 indicated he was shot while inside Vital C Building along Lacson street. This was also pointed out by Senator Panfilo Lacson during the Senate hearing.

On Google Maps, however, the actual Vital C Building is just adjacent to the fast food restaurant that Matobato mentioned.

Matobato’s account about the people who killed King being rebel returnees is different from what he said in his 2014 NBI affidavit. In his sworn statement, he named a certain SPO2 Reynante Medina as the killer. He added that no one would take on a “project” as big as King except Medina, who hits “cleanly and quietly.”

News reports also said Matobato was not among the suspects identified by the police. The local police, in June 2014, arrested 3 men for the murder of King: Paul Labang, Rodel dela Cerna, and Rommel dela Cerna.

According to the police, Labang was the gunman. A year later, Police Superintendent Leonardo Felonia was identified as the alleged mastermind. He was charged with murder.

The alleged arrest of Matobato in 2014, however, did happen based on an affidavit-complaint obtained by Rappler. It was even SPO2 Medina, who he said, was the real killer of King in 2014. It was also Medina who arrested him for supposedly violating the Comprehensive Law on Firearms as his permit to carry had already expired.

For sure, Matobato did not get everything right. Neither did he get it all wrong. From indications, too, the events which he said happened, actually happened. – Rappler.com