Oct 2, 2016 9:30 AM PHT
Katerina Francisco
Facebook Twitter Copy URL
Copied
In lieu of showing the alleged sex video, lawmakers have other tools in their arsenal to try to establish admissible evidence as they probe the illegal drug trade in New Bilibid Prison 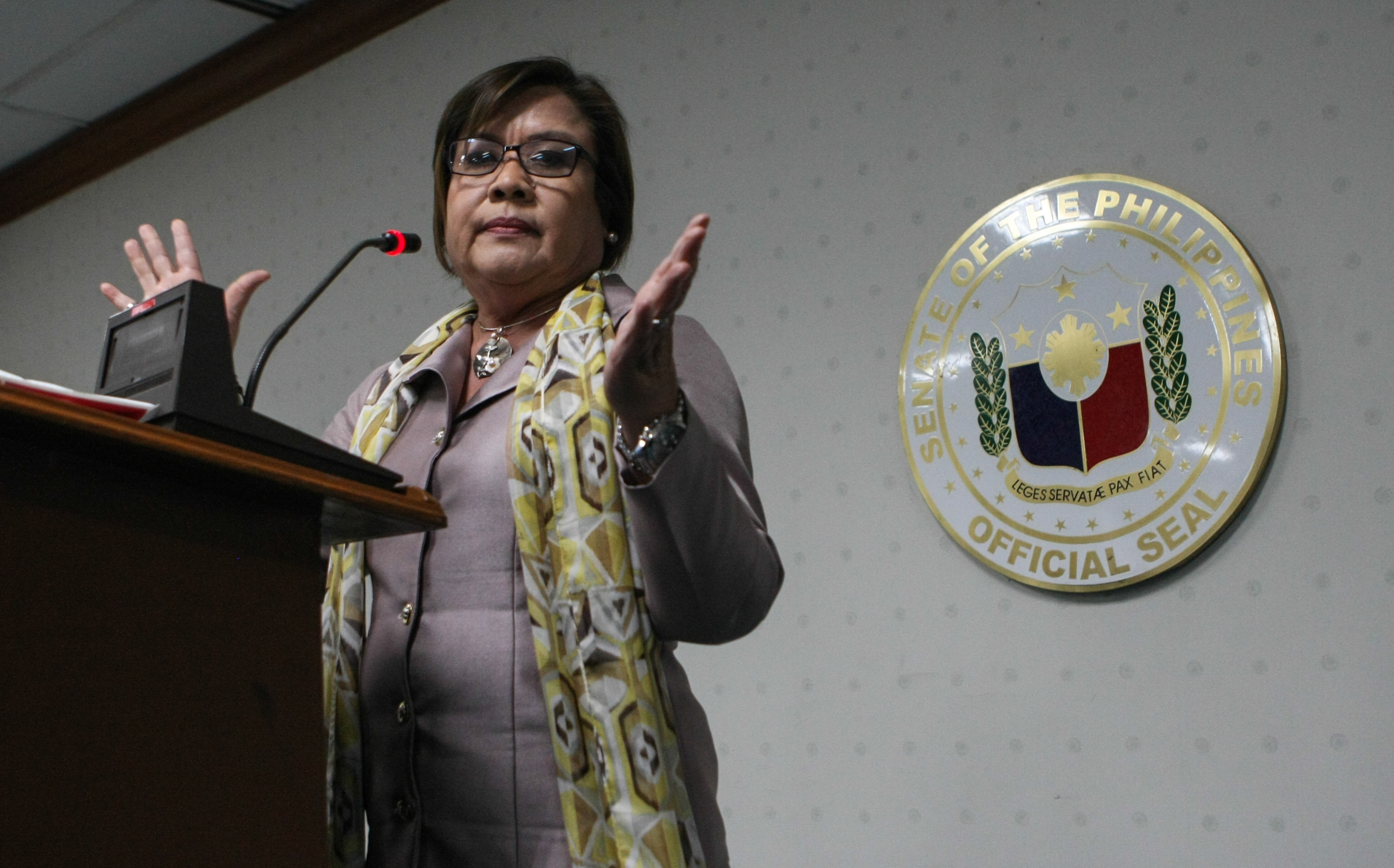 MANILA, Philippines – Neophyte Senator Leila de Lima has been thrust into the political spotlight in recent weeks: she has been accused of coddling drug lords inside the New Bilibid Prison (NBP).

High-profile inmates at the prison have shown up at a congressional inquiry to testify against De Lima, claiming that she got millions of pesos back when she was still justice secretary, in exchange for allowing the illegal drug trade inside the prison to continue.

They also claimed that these funds were used for De Lima’s senatorial bid.

But to some lawmakers, these testimonies are not enough to establish De Lima’s alleged culpability. One piece of damning evidence, they claim, is the alleged sex video between De Lima and her former driver, Ronnie Dayan. Dayan, whom President Rodrigo Duterte said was De Lima’s lover, allegedly acted as bagman collecting drug payoffs from convicts inside the prison.

“Well for me, it’s okay so that people will know if it’s really true or not. Let’s show it if needed as it would be the link as to whether the two have a personal relationship,” Alvarez said earlier this week.

Asked if showing the video – which De Lima has repeatedly denied was genuine – would be considered a form of slut-shaming against the senator, Alvarez replied: “No, of course not. Well, she’s denying that she is the one involved in that sex video so kung mag-de-deny ka, humarap ka dito at sabihin mo na, ”Di ako ‘yan,’ ‘di ba? (so if you’ll deny, face us here and say, ‘That’s not me,’ right?)”

De Lima, for her part, has not hidden her affiliation with Dayan, although she refused to substantiate allegations that he is her lover.

(He became close to me, but as to how close he is to me, pardon me, but I don’t want to touch on that for now because that’s a personal matter, and again, I don’t want us to be distracted by personal things.)

The senator has also repeatedly denied the allegations against her, saying these were all fabricated lies meant to harass and intimidate her because of her criticism against Duterte’s war against drugs. The bloody campaign has seen thousands killed – many as victims of extrajudicial killings.

The proposal to show the sex video in a House inquiry has earned criticism from De Lima’s fellow lawmakers. Her female colleagues called it “illegal” and “misogynistic,” with Senator Risa Hontiveros likening it to abuse suffered by women who are being blackmailed and shamed by their former partners.

Others said the alleged video would not prove De Lima’s supposed ties to the illegal drug trade, and should even be considered illegal under existing laws.

Under this law, it is illegal to take photos or videos of persons involved in sexual activities without the consent of those involved. Publishing or broadcasting such images, or causing these to be published or broadcast, is also punishable under law.

Section 7 further adds that these materials are inadmissible as evidence in any judicial, quasi-judicial, legislative or administrative hearing or investigation – which means it cannot be considered evidence in the House probe against De Lima.

Republic Act 4200 or the Anti-Wiretapping Law

This law penalizes the secret recording of any private communication without the consent of those involved. Any materials obtained in such a way would also be inadmissible as evidence in any judicial, quasi-judicial, legislative or administrative hearing or investigation.

Under Article 359, those who perform any act which casts dishonor, discredit or contempt upon any person could be held liable for slander by deed.

Articles 363 and 364 may also be applicable in this case. Those who incriminate an innocent person for the commission of a crime, or those propagate any intrigue which aims to mar the honor or reputation of a person, may be punished under the law.

In lieu of showing the alleged video, lawmakers and investigators can turn to other strategies and sources of information in their search for evidence that could pin down those allegedly involved in the drug trade.

Under the Rules of Court on evidence, testimonies by witnesses are considered admissible evidence, although witnesses can testify only to facts which they know from personal knowledge.

The House committee on justice has started in this vein, calling inmates as well as former officials at the NBP to testify. Their claims are already on record, set down in their affidavits.

Lawmakers can test the witnesses’ credibility, check the details of their testimonies and see how these match up and corroborate – much like how they cross-examined self-confessed hitman Edgar Matobato during a Senate hearing. (READ: Cayetano, Pacquiao grill Matobato over conflicting claims)

If lawmakers insist on “proving” the supposed relationship between De Lima and Dayan, testimonies from those who knew the two may hold more weight than the sex video that is of questionable authenticity.

Duterte had claimed that De Lima gifted her driver with a two-story house in Pangasinan. According to a GMA News report, records from the municipal assessor’s office identified Dayan’s sibling as the owner of one white house in Urbiztondo, Pangasinan.

Residents in the neighborhood told the Inquirer that Dayan’s children live in an orange bungalow several meters away from the white house, and that De Lima and Dayan would occasionally be seen around town.

The neighbors however could not say whether De Lima indeed gave Dayan the house as a gift.

Official documents, such as bank records and statements disclosing the sources of funds, can be used to establish a money trail.

This has been previously employed in other investigations, such as the pork barrel scam where alleged mastermind Janet Lim Napoles was found to have over $100 million deposited in banks in 2009, according to the digital file of whistleblower Benhur Luy.

Property titles, bank documents, and records from the Anti-Money Laundering Council (AMLC) have also been used in the trial of the late Chief Justice Renato Corona.

In the allegations against De Lima, witnesses in the House probe alleged that the senator allowed drug operations inside the NBP to continue to raise funds for her senatorial bid. But a look at her statement of contributions and expenses (SOCE) submitted after the May 2016 polls did not reveal any names mentioned in the House hearings.

Earlier last month, deposit slips for an account allegedly owned by a former employee of De Lima surfaced, purportedly as evidence of the senator’s drug links. But the ex-employee denied the account. One of the bank slips also showed a supposed transaction on a date where bank operations were closed.

The NBI is now turning to AMLC and bank records to look into the accounts of at least 10 individuals suspected to have laundered drug money for De Lima. Justice Secretary Vitaliano Aguirre II said that the NBI has already received bank records it requested from AMLC. – Rappler.com