First 100 days: Where are we on President Duterte’s promises? 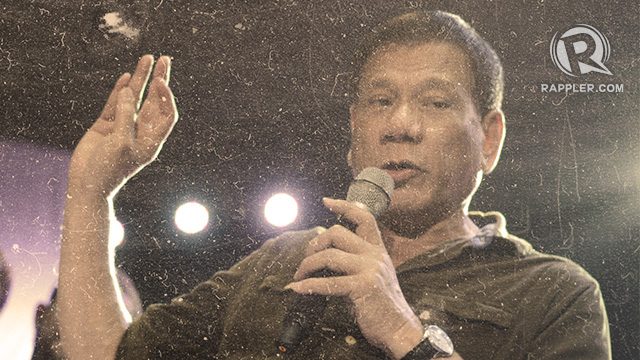 Facebook Twitter Copy URL
Copied
A hundred days since Duterte assumed the presidency, Rappler takes a look at some of his campaign promises and what has been done since then

But while the Philippines’ drug problem has been front and center in his priorities, the President has also vowed to pursue programs that would alleviate the suffering of ordinary Filipinos.

He has said that he does not want to see poor Filipinos lining up for hours outside government offices, waiting for assistance. He has ordered officials under his government to hit the ground running.

A hundred days since Duterte assumed the presidency, Rappler takes a look at some of his campaign promises and what has been done about them since then.

Click the Next or Previous buttons below to read each item. Mobile users can swipe left or right to navigate.

Suppress drugs, crime in 3 to 6 months

It’s been an oft-repeated campaign promise: in 3 to 6 months, Duterte vowed, he would stop crime, drugs, and corruption. He later clarified that he could not “stop” these societal ills, but only “suppress” them.

Since assuming office, Duterte has waged a bloody war against illegal drugs, a controversial campaign that has outraged human rights groups and caused concern among the international community. As of October, over 3,500 alleged drug users and pushers have died – more than half of them victims of extrajudicial killings or vigilante-style executions.

Meanwhile, some 700,000 have voluntarily surrendered to law enforcers.

In mid-September, Duterte asked for a 6-month extension to his self-imposed deadline.

“I didn’t have any idea that there were hundreds of thousands of people already in the drug business. And what makes it worse is that they are operated now by people in government, especially those in elected positions. So it would be government versus government,” he said.

In his speeches at military and police camps, Duterte vowed to increase the pay of uniformed personnel incrementally, along with the purchase of additional equipment.

“I assure you, I will give you everything you need to carry out your mandate,” said Duterte in July.

Duterte has asked Budget Secretary Benjamin Diokno and Defense Secretary Delfin Lorenzana to make his promise a reality. In September, Diokno said that they would be able to do so “through a combination of allowances and increase in pay.”

In his first State of the Nation Address (SONA), Duterte ordered government agencies to reduce processing time of requests and permits to the barest minimum. He had also instructed his Cabinet to process permits within 30 days “or we part ways.”

At least 3 departments have responded by issuing a joint memorandum circular, requiring local government units to cut the processing time for business registration to two days for new applicants, and just a day for renewal – both requiring a maximum of 3 steps.

Land titling also got faster, with the launch of a system by the environment department’s Land Management Bureau (LMB) which cuts down the approval of land surveys to 5 working days, instead of at least 6 months.

In addition, the 911 and 8888 hotlines have been activated in August to receive emergency calls and citizen complaints, respectively.

Shift to a federal form of government

Measures have been put forth in both houses of Congress for a shift to federalism. There are at least two proposals that would divide the country into 11 autonomous states. The manner in which the Constitution would be amended to accommodate this shift has also been debated.

With the ongoing 2017 national budget deliberations and various congressional hearings, discussions on federalism have been put on hold as of this posting. The Federalism Institute of the President’s party, PDP-Laban, continues research on a possible Philippine model of federalism that Congress may consider in its deliberations.

In August, negotiators from the government and the Communist Party of the Philippines held peace talks in Oslo. This was preceded by the temporary release of political prisoners who are consultants of the National Democratic Front, the political arm of the CPP. (FAST FACTS: The CPP-NPA-NDF and the Oslo talks)

The weeklong talks resulted in an agreement on the resumption of formal talks and an indefinite ceasefire issued by the CPP.

As of posting, the two sides have returned to Oslo for the second round of talks, where the communist rebels will push for changes in the Philippines’ socio-economic policies, and follow up on the government’s commitment to grant amnesty for NDF members who are in jail.

The Duterte administration is eyeing the completion of the talks by August 2017.

In August, Duterte warned companies that practice contractualization he would be “unforgiving” and would shut them down if they continued the practice.

“Endo,” the colloquial term for “end of contract,” is the process by which companies hire employees for less than 6 months. This allows them to avoid having to regularize their employment, as stipulated in the Labor Code.

In June, Labor Secretary Silvestre Bello III said he was mulling requiring companies to regularize at least 80% of their employees.

Earlier this week, Bello said about 10,532 workers had been regularized by 195 employers so far. Bello added they were on track to reduce illegal contractualization practices by 50% by yearend, and abolishing it by 2017.

But labor groups want the government to totally eliminate the practice by repealing Articles 106 to 109 of the Labor Code, which legally allows subcontracting.

Push for passage of Freedom of Information law

In July, Duterte signed the executive order on Freedom of Information (FOI), mandating the full public disclosure of offices under the executive branch. Just a day after the May polls, Duterte vowed to push for the FOI, planning to issue an EO if Congress is not keen on passing the bill.

The EO covers “all government offices under the executive branch, including, but not limited to, the national government and all its offices, departments, bureaus, offices and instrumentalities including government-owned and -controlled corporations, state universities and colleges.”

Local government units are also encouraged to “observe and be guided by this order.”

But FOI advocates say a law still needs to be passed, since the EO only covers the executive branch. The draft for the manual of FOI also lists 166 exceptions, ranging from information related to national security matters to criminal investigations.

When Duterte assumed the presidency, Social Welfare Secretary Judy Taguiwalo eased concerns that the program would be discontinued. Current beneficiaries would be retained, she said, but added that there will be no new beneficiaries.

Taguiwalo added that she would review the CCT program to improve it and help ensure that it won’t merely be a stop-gap measure against poverty. She also said that the focus of the program will shift from providing cash assistance to getting jobs.

The CCT program now has a P78.7-billion budget, which includes rice subsidy for beneficiaries – one of the President’s promises in his first State of the Nation Address.

Status: Still a long way to go for tangible results

Duterte has said that he would need emergency powers from Congress to speed up planned fixes to ease congestion. Senator Franklin Drilon has filed a bill seeking to grant emergency powers to the President for two years. Pampanga 2nd District Representative Gloria Arroyo has also drafted a similar measure in the Lower House.

In July, the Department of Transportation (DOTr) unveiled its plans to solve the traffic problem. This includes dividing the busy thoroughfare EDSA in 10 traffic zones with dedicated traffic personnel.

The DOTr is also continuing projects from the previous administration to expand the train system, with coaches for the Metro Rail Transit (MRT) arriving this year. The train lines, however, continue to suffer from breakdowns and technical glitches that affect operations. In September, a deal was reached for a common station that would connect the different train lines in Metro Manila.

Also in September, the first phase of the NAIA expressway connecting Terminals 1 and 2 was opened. The portion linking Terminal 3 is expected to be opened before the year ends. The project is seen to decongest traffic around the airport area.

House Speaker Pantaleon Alvarez expressed disappointment, however, that there was no significant improvement to ease traffic within the first 100 days of the Duterte administration.

Provide free irrigation for farmers by 2017

Earlier this month, Agriculture Secretary Emmanuel Piñol said Senator Loren Legarda, chair of the Senate finance committee, committed to include a P4-billion budget for free irrigation in the 2017 national budget.

“What more do you want when the chair of the finance committee, which has the final say on the national budget, has made the commitment?” Piñol was quoted saying in an Inquirer report.

But the laws that would fulfill this program remains pending in Congress.

Meanwhile, the President this month approved the provision of P21 billion worth of assistance to rice farmers.

Introduce a P1-billion fund in every region for MSMEs

For 2017, the Department of Trade and Industry (DTI) is seeking a P4.2-billion budget. Secretary Ramon Lopez said the allocation for micro, small and medium enterprises (MSMEs) would account for almost half of this budget.

“It will be a big part of the proposed budget because it will include construction of additional SSF [shared service facilities]. For our agency, that serves as our infrastructure to assist MSMEs,” Lopez said in July.

There are no details yet, however, of the specific allocation breakdown for MSMEs, and how the fund would be distributed nationwide.

In June, ACTS-OFW representative Aniceto Bertiz III filed House Bill 192, seeking the creation of a Department of Migration and Development. It will plan, develop, and manage the national migration and development agenda. It will also streamline bureaucratic requirements for OFWs. (READ: Lawmaker seeks creation of department for OFWs)

The proposed measure also seeks the creation of one-stop migrant assistance centers nationwide; the establishment of a P1-billion Special Assistance Revolving Fund; and the creation of an Inter-Agency Coordinating Council on Migration and Development to handle death-row cases, human trafficking, and other humanitarian cases.

According to the House of Representatives website, the bill has been pending at the committee level since July 26.

A counterpart measure, Senate Bill 146, was also filed by Senator Cynthia Villar. The Senate bill has been referred to various committees.

In his first SONA, Duterte also asked Labor Secretary Bello to create a one-stop shop for OFWs. The first one was opened on August 15.