FAST FACTS: What you need to know about the PH education system 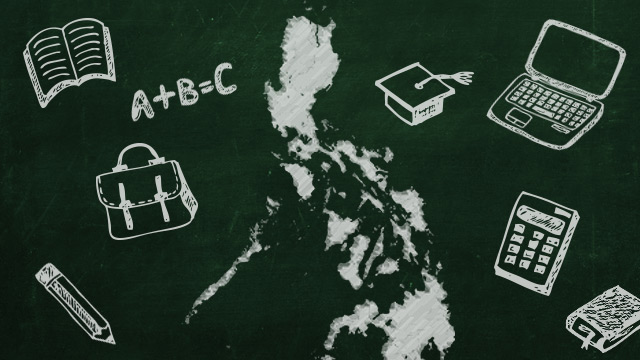 MANILA, Philippines (UPDATED) – The new academic year in the Philippines will begin on Monday, June 4.

The Department of Education estimates about 28 million students will go back to both public and private schools across the country.

In time for the 2018 school opening, here are some of the things you need to know about the country’s education system.

Three agencies handle different levels of education: The Department of Education for basic education, the Commission on Higher Education for tertiary and graduate education, and the Technical Education and Skills Development Authority (TESDA) for technical-vocational courses and middle education.

“Trifocalization” was among the recommendations of the Congressional Commission on Education (EDCOM) in 1992, which aimed to oversee the current state of Philippine education.

2. PH education gets the biggest chunk of the national budget.

The 1987 Constitution provides that “the State shall assign the highest budgetary priority to education.”

The 2018 budget allocation for government agencies handling education amounts to P672.41 billion, excluding the automatic appropriations as listed in the bicam report.

DepEd received P553.31 billion, which is expected to be used in establishing and maintaining facilities, hiring teaching and non-teaching personnel, and in developing and providing learning materials to students. (READ: What’s the share of gov’t offices in the 2018 P3.8-T national budget?)

3. PH was the last country in Asia to have a 10-year pre-university cycle.

Prior to the Enhanced Basic Education Act of 2013, which added two more years to the country’s basic education, the Philippines was the last country in Asia, and one of only 3 countries (Angola and Djibouti) worldwide, with a 10-year pre-university cycle. (READ: Infographic: 10 things about K to 12)

As part of the government’s “Education for All” mandate, the Madrasah Education Program was adopted in madaris (Muslim schools) especially in Mindanao. The Arabic Language and Islamic Values (ALIVE) are part of the basic education curriculum of these schools.

In 2004, DepEd released DO 51, s. 2004 ordering madaris to adopt a standard curriculum for both private and public, for the following reasons:

5. School days may not exceed a certain number.

To prepare for the ASEAN Economic Community in 2015, several universities in the country expressed their intention to shift their academic calendar so they can start classes in August. (READ: CHED: School calendar shift not for all)

CHED said that it will allow higher education institutions (HEIs) to change their academic calendars as long as these are in accordance with the law.