The bigger hurdles to having ICC prosecute Duterte

On April 24,  Jude Josue Sabio, lawyer of self-confessed hitman Edgar Matobato, submitted a 77-page “communication” to Chief Prosecutor Fatou Bensouda of the International Criminal Court (ICC). He charged Philippine President Rodrigo Duterte and 11 of his senior officials of having committed “mass murder or extra-judicial executions constituting crime against humanity.” Duterte’s war on drugs, he claimed, “have brought deaths to not less than 1,400 individuals in Davao City and more than 8,000 in his national war on drugs, respectively.”

While many media outfits labeled it as a “complaint,” Sabio’s “communication”is not a complaint in the strict sense of the word. Under the Rome Statute (the treaty that governs the ICC), non-state actors like NGOs or private individuals like Attorney Sabio are not allowed to directly file complaints before it.

Under Article 13, the ICC can only act on a situation when:

It is clear in the above provision that Sabio’s communicationis not enough to directly trigger the jurisdiction of the ICC over the acts and the person of President Duterte. At the most, the communication can be treated as an attempt to relay “information”to the ICC’s Prosecutor, hoping she would initiate an investigation proprio motu into the acts alleged to have been committed by Duterte. Or she may completely disregard it.

However, the bigger hurdle to Sabio’s quest to prosecute Duterte before the ICC is the “principle of complementarity,” which essentially mandates that crimes be investigated or prosecuted domestically first, before they can be elevated to the ICC.

This recognizes that states have the first responsibility and right to prosecute international crimes. This is founded on the idea that signatory states are sovereign, and this sovereignty extends to its criminal jurisdiction. The ICC was not created to substitute domestic courts, but envisioned as a court of “last resort,” specially covering the most serious crimes such as genocide, crimes against humanity, war crimes, and crime of aggression.

Thus, direct resort to the ICC, bypassing available domestic remedies, is a breach of the “principle of complementarity.”It renders the case “inadmissible” following Article 17 of the Rome Statute. This inadmissibility also attaches when: 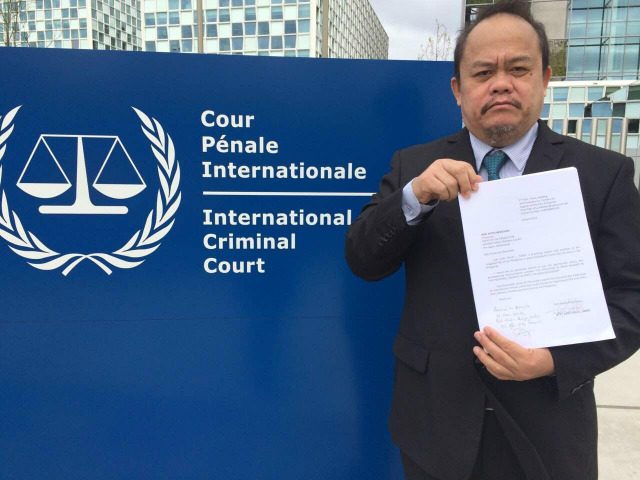 This rule on complementarity, however, is not set in stone. The framers of the Rome Statute have been mindful that, in many cases, heads of states can be the very people directly involved in the commission of crimes, and in those instances domestic courts have the tendency to be protective of them. In this case, the Rome Statute dispenses the complementarity rule under the condition that it can be demonstrated that the State is either “unwilling” or “unable” to genuinely carry out the investigation or prosecution.

The State is said to be “unwilling”to prosecute when:

Sabio’s supposed complaint raises an immediate question on how he justified and demonstrated the unwillingness or inability of the Philippine government to prosecute the President for the crimes he allegedly committed.

Under the Philippines’ constitutional system, prosecuting an incumbent President for a criminal offense requires a two-step process. First, he has to be impeached to strip him of his immunity from suit. Then comes the actual prosecution before the regular courts. The impeachment is undertaken by Congress, initiated at the House of Representatives and tried in the Senate. The prosecution for the criminal offense is heard by regular courts.

For Sabio to show the unwillingness of the Philippine government, he has to show that any of the following:

The problem is that, one, at the time of the sending of the communication to the Prosecutor of the ICC, an impeachment complaint had already been filed against President Duterte by Magdalo Representative Gary Alejano on exactly the same grounds cited by Sabio – i.e. “extrajudicial killings of persons suspected of being drug pushers or users.” It remains pending before Congress.

The pendency of an impeachment proceeding, being effectively preparatory to Duterte’s domestic prosecution, renders any ICC move  inadmissible by reason of the complimentarity principle.

Two, the criminal prosecution before local courts per se has also yet to be availed. When a criminal case is still pending and yet to be resolved, or even yet to be filed, Sabio cannot claim that domestic remedies have been exhausted or that the hearing bodies have not been independent or impartial.

Regardless of whether Sabio’s claim is true, the fact remains that his resort to the ICC is premature, at least at the moment. It can, however, be revived or refiled when the impeachment case or the subsequent court trial eventually turns out to have been conducted not independently and impartially. It would then be tantamount to “unwillingness.” This time the waiver of the requirement for complimentarity may be justified. – Rappler.com

Emil Marañon III is an election lawyer who served as chief of staff of former Comelec Chairman Sixto Brillantes Jr. He is candidate for LLM in Human Rights, Conflict and Justice at SOAS, University of London, as a Chevening scholar.