In the PH drug war, it’s likely EJK when… MANILA, Philippines – The administration of President Rodrigo Duterte has been haunted by issues related to his intense anti-illegal drug campaign.

An “unprecedented” rise in the number of deaths in both police operations and vigilante-style killings was observed since the bloody war on drugs was launched in July 2016.

As of April 23 this year, 2,717 suspected drug personalities have been killed in legitimate police operations since the start of the Duterte administration, according to data from the Philippine National Police (PNP). There are, however, 3,603 deaths that still remain under investigation. (READ: IN NUMBERS: Philippines’ ‘war on drugs’)

The alleged extrajudicial killings that happened in a span of less than a year bore similarities to each other. The narration of witnesses of killings were all too familiar.

Were there observable common patterns in the reported extrajudicial killings? Here’s what Rappler found out:

WHEN A VICTIM WAS ABDUCTED AND SALVAGED Suspected drug personalities whose lifeless and wrapped bodies end up on the streets were abducted beforehand, according to witnesses. More often than not, the abductors were armed men wearing masks.

Usually, the victims were at their most vulnerable during the time of abduction: either working or at home with their families.

This is what happened to Heart de Chavez in January 2017. Her family narrated that they were all asleep when big burly men wearing masks barged into their home and dragged Heart out. They found her lifeless body with a bullet in her cheek inside an empty house not far from their own.

It was what happened to 22-year-old Rowena Tiamson who never went home after going out to enroll for her last semester in college. Rowena’s body was found on July 19, 2016 hands tied and face wrapped in packing tape. Around her neck was a cardboard sign with the all-too-familiar phrase, “Huwag tularan, pusher (Don’t emulate me. I’m a pusher).” Her family insisted she never used drugs.

The state Rowena was discovered after being abducted was replicated so many times in the last 9 months.

Suspected drug personalities were reported missing and their bodies were later found with their heads wrapped in packing tape and hands tied with a cord.

How does the public know it’s drug-related? Through a cardboard bearing the words, “drug pusher ako, huwag tularan (I’m a drug pusher, don’t emulate me).”

There were cases when packets of shabu were found inside the pockets of the victims.

WHEN A VICTIM WAS KILLED ON THE SPOT 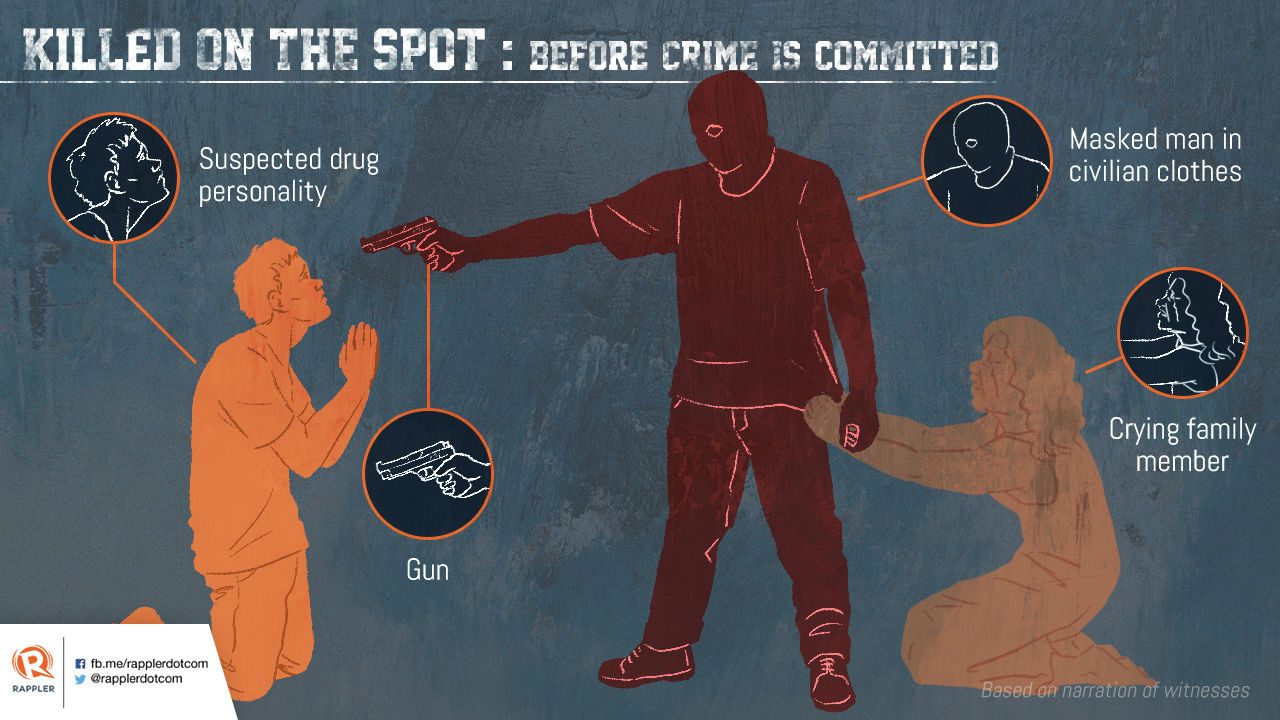 People who were suspected of doing or peddling illegal drugs were also killed on the spot.

According to witnesses’ accounts, perpetrators were often armed men wearing civilian clothes. They barged into the victims’ houses and emptied their magazines on them. Sometimes, they dragged them out to narrow alleys.

On October 31, 2016, 5 suspected drug personalities were massacred in Barangay Addition Hills in Mandaluyong City. The killers were 6 armed men who wore helmets to cover their faces. (READ: Impunity: A Halloween massacre)

One witness in the Addition Hills massacre narrated that she heard the victims begging the killers to stop. She heard one of them, a woman, cry out that she would surrender.

It’s the same narrative from several other witnesses. They insisted that the victims wailed and begged the perpetrators to stop, only to be ignored. They also insisted that their son, brother, husband, or friend did not do anything wrong and begged to just be arrested, and not killed on the spot.

There were cases where the families themselves were assaulted.

It was what happened to Nenita Sumilang, mother of 18-year-old Joshua who was dragged out of their house by armed men. She said that a Tondo policeman named Ronald Alvarez aimed a gun at her as she begged them to just jail her son.

In a separate incident in Tondo, Rowena Appari passed out after being hit and kicked by one of the 5 armed men who barged into their home and eventually killed her son Rex while his girlfriend, Lori Ann, and their 10-month-old son knelt and cried in an alley near their house. But these pleas often fell on deaf ears.

Suspected drug personalities were killed by gun shots, usually to the head, as their families wailed nearby.

Their lifeless, bloodied bodies lay slumped as the killers left the scene. In several cases, families and investigators recovered packets of shabu and a rusty gun sans a serial number (often .38 caliber) near the body.

The presence of these elements in the crime scene – a gun and illegal drugs – supported the claim that the victims fought back or that they were indeed drug addicts.

There were also cases when victims were killed by armed men aboard a motorcycle. Sometimes, after gunning down their targets, the killers threw a piece of paper identifying the victim as a drug pusher.

This was what happened to 21-year-old Jerico Camitan and 17-year-old Erica Fernandez who were both killed by gunmen on a motorycle in Quezon City in October 2016, according to witnesses. Near Jerico’s body was a cardboard that said “Tulak ka, hayop ka (You’re a pusher, you are an animal)!”

It was the same thing that happened to Roman Clifford “Oman” Manaois in Dagupan City, Pangasinan. A witness recalled that after his companion was shot, 20-year-old Oman held up his hands, seemingly asking for mercy, when the gunmen wearing bonnets turned and killed him. (READ: Drug user? No, Oman was a good son)

The denial, however, did not deter at least 45 UN member-countries from expressing concern over the human rights situation in the country. During the Universal Periodic Review, the Philippine government was asked to investigate and put an end to the extrajudicial killings in the war on drugs.  (READ: Countries call for end to killings in PH drug war)

The constant denial of the government has not halted the killings. Members of the local media, especially journalists assigned to the night beat, continue to document every bloody incident involving suspected drug personalities and the police. Bodies are still being left behind by alleged vigilantes in dark alleys. – Rappler.com