How did a convicted drug lord’s daughter get PNP security? 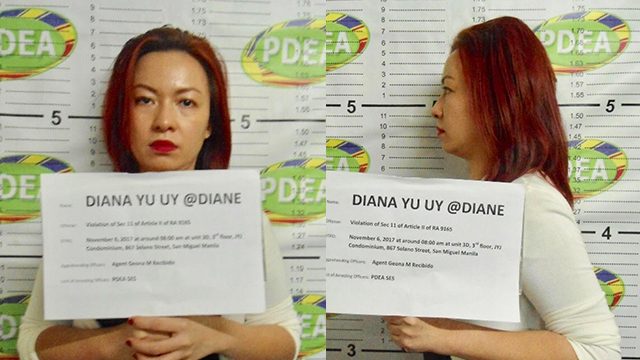 Facebook Twitter Copy URL
Copied
It’s not that easy to get a security detail from the PNP. So why was Diana Yu Uy, daughter of a convicted drug lord and herself apparently an illegal drugs personality, assigned two policemen as her security detail for over 7 years?

MANILA, Philippines – In one of their first biggest operations since its official designation as the “sole agency” in President Rodrigo Duterte’s drug war, the Philippine Drug Enforcement Agency (PDEA) caught not only a convicted drug lord who was already behind bars, but also her daughter who was also part of the illicit business.

But it was a huge surprise for PDEA chief and retired police general Aaron Aquino when, during the operation, his operatives discovered that Diana Yu Uy, daughter of Yu Yuk Lai, had no less than a police officer assigned to the Police Security and Protection Group (PSPG) of the Philippine National Police (PNP) as her security detail.

The PNP is now investigating what Police Office 3 Walter Vidad and Police Officer 2 Faizal Sawadjaan knew about the illegal business and if they had a role in it.

Politicians and other government officials are typically assigned at least two personnel from the PSPG as their security detail. If they want more police personnel, they must submit a request letter to the PNP and get approval from no less than President Rodrigo Duterte himself.

But does a private individual get assigned police security in the first place?

Uy was first assigned a police detail in 2010, or nearly 4 years after she was a kidnap-for-ransom victim, in 2006. The kidnapping was apparently part of the reason for her application.

Before a private person gets police security, his or her situation is assessed and the request vetted.

If an individual wants police protection, he or she can typically file a complaint with a police station first, according to a policeman familiar with PSPG procedures. From there, he or she proceeds to the PSPG.

The individual would need to submit a letter formally requesting police security, an affidavit, and the police report stating the threat against the person’s life, according to PSPG chief Joel Garcia.

Once the PSPG gets the request, they ask the Directorate for Intelligence (DI) to conduct a check on the individual and to validate if there is indeed an “imminent threat” to his or her life. Garcia said the process could take a couple of weeks or several months.

Individuals typically request for two PSPG personnel so they can alternately take breaks and rest days.

Once the DI validates the threat to the applicant’s safety, the application is forwarded to the Office of the Chief of the PNP for final approval.

Who gets assigned where?

Although it’s the PSPG that processes requests for police security, the policemen or women assigned as security personnel aren’t always from the PSPG itself. Garcia explained that, often, once a request is processed, personnel from other units are transferred to the PSPG so they can officially be security details of VIPs.

It’s because, obviously, trust is key when a person, whose life is under threat, decides on who gets to protect him or her. In practice, it’s a highly informal process. The VIP in question can sometimes ask friends or family members – both inside and outside the PNP – for recommendations on who can be their security detail.

This, of course, must still be vetted by the PSPG.

PSPG personnel receive the same basic salary as other policemen and do not receive special allowances from the PNP. The person they’re assigned to, however, can always choose to give them allowances, including those for food and travel expenses. These are informal arrangements between the PSPG personnel and their VIPs.

Their schedule also depends on their arrangement with the VIP.

“VIPs” or persons whose safety is being threatened must renew their request every 6 months. Each time, they should be vetted by the Directorate for Intelligence and they must secure the approval of the PNP chief. VIPs typically request for the same policemen each time.

Garcia said that there were no records of ties to Uy, save for the 2006 kidnapping case. The PNP’s check also did now show hits for her mother, who was convicted in 2001. It is not clear how these details went unnoticed by the Directorate for Intelligence.

The probe, thus far, is an internal one by the PSPG. Garcia said other units – the Internal Affairs Service (IAS) or the Criminal Investigation and Detection Group (CIDG), for instance – could be called in to conduct their own probes. – Rappler.com