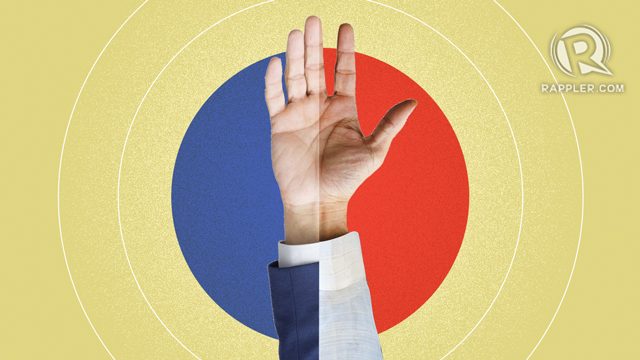 Facebook Twitter Copy URL
Copied
(UPDATED) Framers of the 1987 Constitution we spoke with say members of the committee on amendments and revisions forgot to adjust a provision in their final draft to reflect a bicameral congress voting on charter change. The Supreme Court can clarify that now.

MANILA, Philippines (UPDATED) – It may be up to the Supreme Court now to clarify an unclear provision in the 1987 Philippine Constitution that has set off a “conflict” between the Senate and House of Representatives.

On Thursday, January 25, law professor Arturo de Castro filed a petition, asking the High Court to issue a declaratory relief on whether or not the two chambers of Congress should vote jointly or separately in introducing changes to the Constitution.

The manner of voting sparked disagreements between congressmen and senators because Article XVII on Amendments and Revisions of the 1987 Philippine Constitution is silent on the matter. (READ: What you need to know about Charter Change)

According to constitutional law experts, the lack of clarity in this specific provision was because the 1986 Constitutional Commission (Con-Com) members wrote the draft with a unicameral assembly in mind.

But things changed when the legislative arm of the government was tackled. From the committee-approved unicameral assembly, the plenary at the Con-Com voted to change it to a bicameral congress. This change was, however, not clearly reflected in the final provision in the Constitution.

We spoke with framers of the Constitution who were privy to what happened at the time and this is how they explained the resulting confusion.

Retired SC justice Vicente Mendoza explained to Rappler that at the start of the proceedings, the Constitution was drafted “on the premise that the lawmaking department will be unicameral but towards the end, they decided to return to the bicameral system.”

This was echoed by retired SC justice Adolfo Azcuna, who was one of the framers of the Constitution.

“Ito ang problema niyan (this is the problem there): originally, this provision was drafted by us when we had in mind a unicameral legislative body – one chamber,” he explained. “Kaya hindi naman sinabi diyan (That’s why we didn’t state) whether they should sit together, separately, vote separately, or together.”

The official journal for the day when Article XVII was first tackled by the 1986 Con-Com states the same. On July 8, 1986, the committee on amendments and transitory provisions put forward Committee Report Number 7 (what would later become Proposed Resolution Number 322), which concerned amendment or revision of the Constitution.

During an interpellation, then commissioner Florenz Regalado pointed out to committee chairperson Jose Suarez the composition of sections 1 and 2 of Article XVII:

MR. REGALADO: I also notice that both Sections 1 and 2 are premised on the anticipation that the Commission, not only the Committee, will opt for a unicameral body. In the event that a bicameral legislative body will carry the day, has the Committee prepared contingency proposals or resolutions?

MR. SUAREZ: Yes, in that situation, we would propose to include the words IN JOINT SESSION ASSEMBLED.

MR. REGALADO: But still maintaining the same number of votes?

MR. SUAREZ: The Commissioner is right.

On July 9, 1986, after two days of interpellation, Con-Com members adopted Proposed Resolution Number 322, with 29 votes in favor and none against.

On revision or amendment of the Constitution, the plenary at the Con-Com voted to change the draft of the committee on amendments and transitory provisions to refer to a bicameral legislative body instead.

Azcuna, a member of the committee on the legislative, recalled that they had to rewrite parts of the draft to reflect the changes.

“Nagboto and naging two chambers by one vote, so ano’ng nangyari doon sa draft na sinubmit ng committee?” he explained. “Kailangan baguhin dahil iyong draft on legislative power ay one chamber lang. We had to change it into what it is now.”

(There was voting and it became two chambers by one vote so what happened to the draft we submitted as a committee? We had to change the draft on legislative power because it pertained to only one chamber there. We had to change it into what it is now.)

Several provisions were rewritten. However, the committee in charge of Article XVII or the section on Revision and Amendments “failed” to adjust their provisions to fit the bicameral character of the legislative department.

“That belongs to another committee. The other committee apparently failed to adjust it,” Azcuna said. “There’s an overall review pero hindi na rin nakita iyon (it wasn’t noticed anymore) so it really was an oversight, considering that we did this in only 6 months.”

Mendoza added: “They forgot [about Article XVII] that’s why I said, for once, Homer nodded, nakatulog (fell asleep). So what happened? Disastrous. This is the problem, this one is based on the premise that there will only be one chamber.”

The committee on amendments and transitory provisions also failed to apply their original plan in case a bicameral legislative body would be adopted – which was to add the phrase “in joint session assembled.”

Mendoza said the only way to clear the manner of voting and to avoid further problems is to rewrite the part. But doing so may open the floodgates of abuse. (READ: LOOK BACK: Past Charter Change attempts and why they failed)

“That’s why well-meaning attempts to clarify provisions in the Constitution cannot be done because of fear that the politicians will come in and propose extension of their terms in some direct or indirect way,” he said.

“Now, you cannot do that because the politicians are there waiting for you to open the door,” Mendoza added. “Once you open the door, they will get in faster than you can get in.”

Azcuna, however, said that the “unclear” Article XVII provision on voting does not mean there is a failure to provide for a way to change the Constitution. If needed, it can be interpreted through various means – whether by Congress or the SC.

“We still have a system under this Constitution that an interpretation of the Constitution can be made by those implementing it and ultimately by the Supreme Court, so there is a solution,” he explained.

Letting Congress interpret the provision, however, may require more work as the House of Representatives and the Senate have already engaged in a long, public debate on Charter Change.

House Speaker Pantaleon Alvarez has insisted that the two chambers should vote jointly, while senators adamantly want to vote separately. With the nearly 300 House members against 23 senators, the voice of the Senate would be deemed irrelevant in a joint vote.

This impasse was broken when congressional leaders on Wednesday, January 24, decided to focus first on the proposed amendments before tackling the method by which these changes would be made.

Until the SC releases its own declaratory relief on the matter, however, the manner of voting will still be up for debate between the two chambers of Congress. – with reports from Sofia Tomacruz/Rappler.com