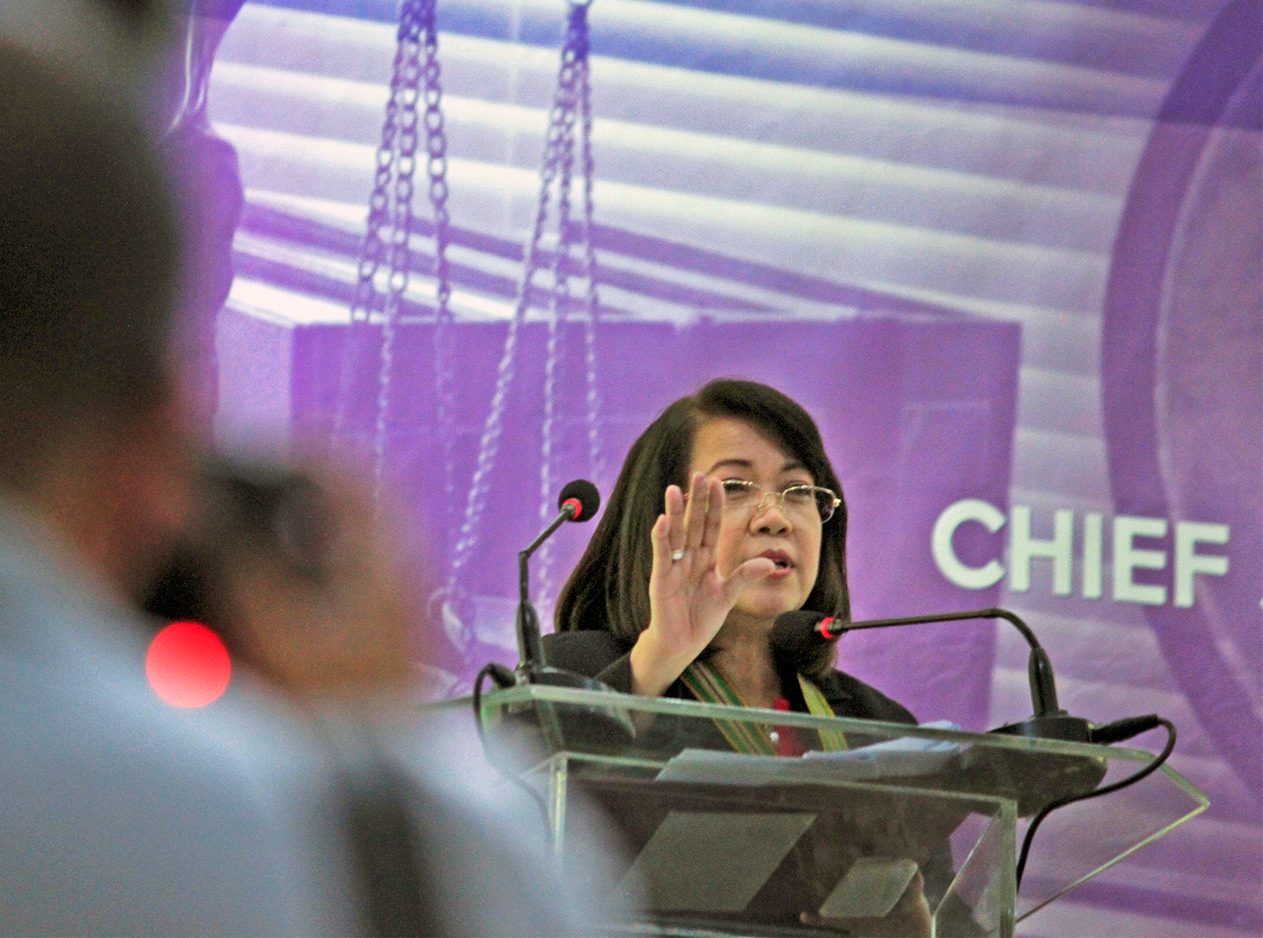 Facebook Twitter Copy URL
Copied
Sereno and Calida cite jurisprudence on quo warranto proceedings. But can the SC entertain the petition in the first place?

MANILA, Philippines – Supreme Court (SC) Chief Justice Maria Lourdes Sereno will now rely on her colleagues at the en banc to get rid of a quo warranto proceeding that her team says is unconstitutional.

First, the en banc must determine if they will accept the petition. If they do, they can either dismiss it for lack of merit, or grant it after due process. Solicitor General Jose Calida wants the SC to oust Sereno as Chief Justice.

“The Supreme Court ought not to entertain the quo warranto petition for it has absolutely no basis in law and in the Constitution. The high tribunal should dismiss the petition outright on the basis that quo warranto is not a proper remedy,” Sereno’s camp said in a statement on Monday, March 5.

Earlier Calida asserted that quo warranto is recognized as an extraordinary legal remedy sanctioned not only by the rules of court, law, and jurisprudence, but by the Constitution itself.

A quo warranto petition, according to Calida, is the “proper remedy to question the validity of Sereno’s appointment.”

Rappler takes a look at jurisprudence on quo warranto proceedings, and the cases cited by both camps to help boost their case.

In January 2016, the SC en banc removed Philip Pichay from the House membership as representative of the 1st district of Surigao del Sur.

The en banc, with the concurrence of Sereno, declared Pichay ineligible to hold and serve office, saying he should never have been allowed to run due to a libel conviction. That case stemmed from a quo warranto petition filed by the losing candidate.

The difference between Pichay and Sereno? Sereno is an impeachable officer.

When it comes to impeachable officers, what does jurisprudence say?

In that ruling, the SC said: “To grant a complaint for disbarment of a Member of the Court during the Member’s incumbency, would in effect be to circumvent and hence to run afoul of the constitutional mandate that Members of the Court may be removed from office only by impeachment for and conviction of certain offenses listed in Article XI (2) of the Constitution.”

They are highlighting that part of the ruling to say that the constitutional provision on removing certain officials only through impeachment cannot be circumvented.

This one is cited by Calida.

In 2012, the SC en banc declared unconstitutional the chairmanship of Reynaldo Villar at the Commission on Audit (COA). Section 2, Article XI of the 1987 Constitution says that members of constitutional commissions such as COA are also impeachable.

Villar was already serving as commissioner for 4 years when he was appointed chairman. Villar wanted to have a fresh 7-year-term. The en banc reiterated that Villar could serve as chairman only for the unexpired years of the departing chairman.

In citing that as precedent, Calida focused on the fact that the en banc voided an appointment of an impeachable officer.

“The Court did not dismiss the petition on the ground that the COA Chairperson may only be removed by impeachment. In other words, the constitutional provision on impeachment does not preclude the separation of an impeachable officer for reasons such as the failure to prove eligibility to the position to which that officer was appointed,” Calida said in his petition. (READ: Why SC justices forced Sereno to go on leave)

In 1949, petitioner Nacionalista Party wanted to declare void the appointment of Vicente de Vera as Commission on Elections (Comelec) chairman on the ground that it was a reappointment prohibited by the Constitution.

A Comelec chairman is an impeachable officer, and though the SC in that case denied the Nacionalista Party’s petition, they said this in their ruling: “The ground invoked by the petitioners would be proper in quo warranto proceedings but not in a petition for prohibition.”

Who has the strongest precedent?

For Integrated Bar of the Philippines (IBP) national president Abdiel Dan Elijah Fajardo, the question that has to be resolved is whether the SC has jurisdiction over Sereno.

“We already made a position that the only way to remove a member of the Court is through impeachment,” Fajardo said.

Fajardo cited Section 11, Article VIII of the Constitution which authorizes the en banc to discipline only lower court judges.

“If you want to remove the chief justice, you go through the only mode, after all the charges in the quo warranto petition are contained in the impeachment complaint,” Fajardo said.

Should the SC take the second step and actually require Sereno to comment on the petition, Fajardo said it will be a “cause of concern.”

“The SC might actually be entertaining a second avenue by which the Chief Justice must be ousted, it’s alarming because it could backfire on any of the sitting justices,” Fajardo said. – Rappler.com