Why is it so difficult to access SALNs of House lawmakers? 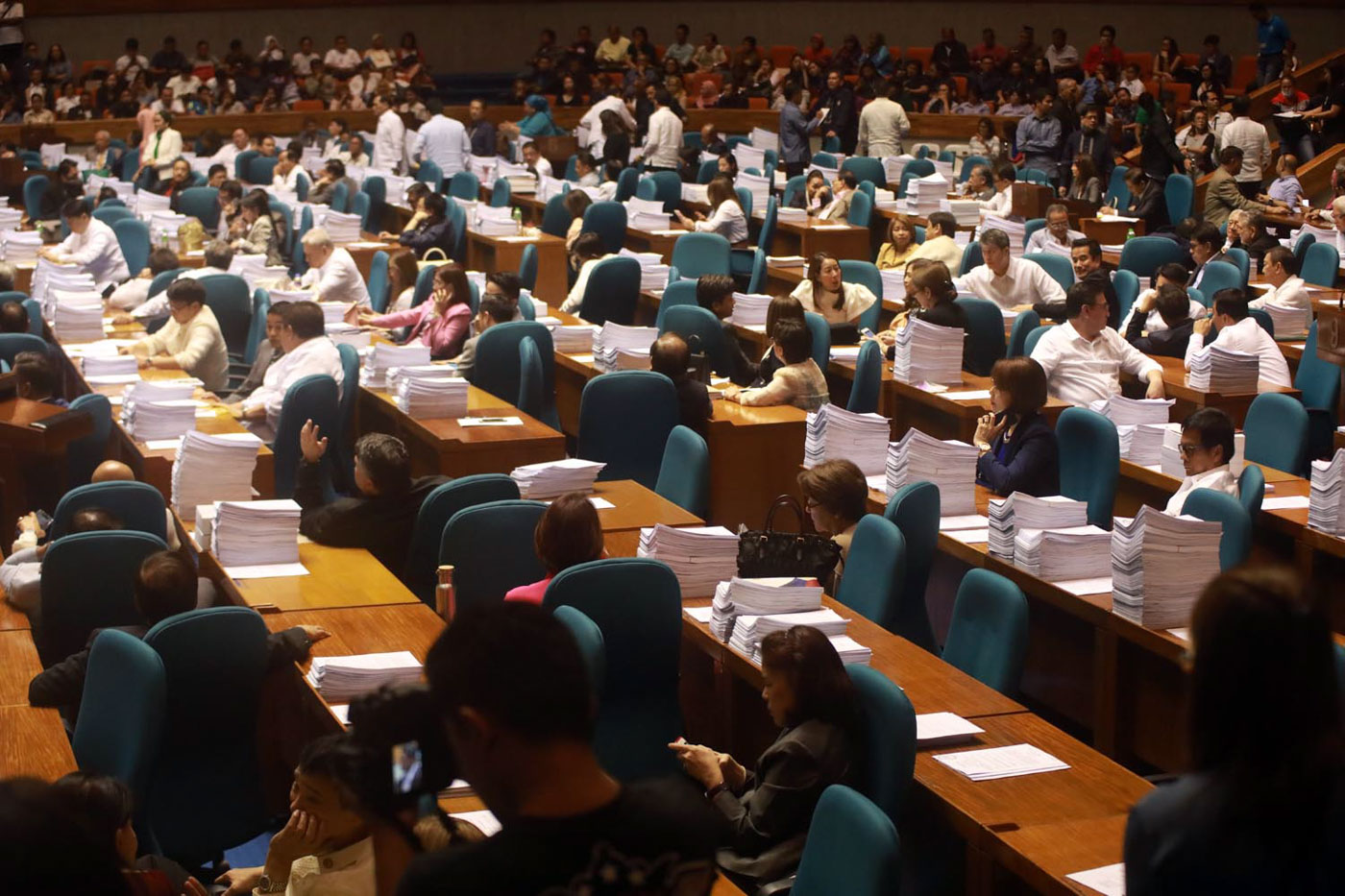 MANILA, Philippines – (UPDATED) Wonder how much the net worth of your district representative is? Access to lawmakers’ Statements of Assets, Liabilities, and Net Worth (SALNs) may soon be more restricted with the new set of rules being proposed at the House of Representatives.

House Resolution (HR) No. 1410 contains the proposed rules of procedure in the filing, review, disclosure of, and access to SALNs of all legislators and employees of the lower chamber.

Under HR 1410, any person’s request to gain access to a lawmaker’s full SALN would have to get the approval of the House plenary. This is on top of the request successfully hurdling the committee on SALN review and compliance.

This means legislators would have the final say on whether or not a requesting party can access one of their colleagues’ SALNs.

A requesting party would also be required to sign the sworn undertaking and declaration portion of the SALN Request Form, which lists specific ways the information in the SALN may or may not be used.

Failure to submit the SALN is a violation of Section 8 of Republic Act Number 6713. It is punishable by suspension of up to 6 months for the first offense, and dismissal from service for the second offense.

The late Renato Corona was impeached as chief justice for failing to declare some of his assets in his SALN.

Who drafted the SALN rules? The resolution was authored by the previous leadership of the House under the 17th Congress:

Apart from Umali, the proposed rules were drafted by the following committee members:

It remains to be seen if Speaker Gloria Macapagal Arroyo, who replaced Alvarez, will act on the resolution or move to amend its provisions before the 17th Congress adjourns session sine die in June 2019.

How were people able to access lawmakers’ SALNS in the past? It has long been difficult to get a copy of the full SALNs of all members of the House, even before the drafting of HR 1410.

In 2012, the House began refusing to automatically release the SALNs of all of its members. Then speaker Feliciano Belmonte Jr created a committee tasked with formulating rules and procedures on the public’s access to SALNs. (READ: 3 years post-Corona, lawmakers averse to release SALNs)

Belmonte also said that requests for SALNs should be directed to the individual lawmakers themselves. When Rappler did so in 2012, only 5 congressmen released their SALNs.

Instead of posting the full SALNs of its members, the House just uploads a summary of every legislator’s total assets, total liabilities, and net worth on its official website sometime in the middle of the year. (READ: 9 representatives’ net worth more than doubled in 2017)

Any lawmaker, however, is free to voluntarily publicize his or her SALN, like what several opposition lawmakers did this year with their 2017 SALNs.

How would lawmakers’ SALNs be accessed under HR 1410? The resolution essentially formalizes the request procedure being implemented since the time of Belmonte.

Section 12, Rule V states that all requests for the SALNs of legislators and House employees shall be filed with the OSEC using the official SALN Request Form. Only the copies of the latest SALNs would be given, unless the requesting party would be able to justify the need to access previous years’ SALNs.

Journalists who want to access SALNs would have to provide “proof under oath” of their media affiliation as well as a certification from a House-accredited media organization that they are a “legitimate media practitioner.”

The requesting party would have to sign the SALN Request Form’s sworn undertaking and declaration portion, which says the SALNs may only be used for the purpose stated in the request.

The same document also says the SALN shall not be used for the following:

A requesting party would also have to “certify under oath” that the SALN request “does not constitute an unwarranted invasion of personal privacy” and the name of the SALN owner would not be disclosed but referred to in general terms if used for academic purposes.

The person requesting must also declare that he or she has no “derogatory record” of having misused any information he or she previously requested.

The SALN review and compliance committee secretariat will conduct a preliminary assessment of the request. A copy of the request would also be given to the legislator or House employee concerned.

If the secretariat approves the request, it would then be transferred to the SALN review and compliance committee members.

Section 14 states that the committee may grant or deny the requests for access to the SALNs “provided that access to copies of the SALNs of House members by the public shall be referred to the House plenary for final determination.

Would there be any fees to gain access to a SALN? If HR 1410 is approved, yes.

The resolution will require a requesting party to pay P300 for each copy of the SALN request. This would cover the “cost of reproduction and certification, exclusive of mailing costs and other related expenses.”

So should a person be allowed to gain access to the SALNs of all 292 lawmakers in the 17th Congress, he or she would have to pay a total of P87,600.

How do the authors defend HR 1410? De Vera, one of the lawmakers who drafted the proposed House rules on the SALNs, said the intent was to protect House members and employees’ right to privacy.

“The SALN contains information or details which are very private. For example, the house and lot, residential lot, the address is there, and of course, not all members of Congress would want their address to be known to the public. They also want to have security in their own places,” De Vera told Rappler in a phone call.

He said the committee agreed on releasing the summary of lawmakers’ total assets, total liabilities, and net worth anyway, which are the more crucial information in the SALNs.

“What is important in the SALN is the capacity of every government employee to procure any property based on acquisition cost. Can he or she really afford to buy this property?” said De Vera in Filipino.

He added that the committee “patterned” the proposed rules on SALN filing and access with the procedure being implemented in the Supreme Court (SC). (READ: Why don’t we know enough about Supreme Court Justices’ wealth?)

“We patterned our procedure in the release of SALN to that of the SC. So we did not just invent this one. When you ask for an SC justice, they would take it up in the banc. For us, we take it up on the plenary,” said De Vera.

Still, he said a person who wishes to access lawmakers’ SALNs can always go directly to the legislator himself or herself. The proposed rules would only be applied should the lawmaker concerned refuse the person’s initial request.

“If the lawmaker would give his consent, then no problem about it,” said De Vera.

This is not explicitly mentioned in HR 1410, however.

“The resolution provided stringent measures and requirements for the release of SALNs by a review committee that has the power to decide to withhold such public document,” said Villarin, representative of Akbayan.

“It emasculates the right to information of citizens, especially that of looking into the accountability of their public officials,” he added in a text message to Rappler.

“What is so sacrosanct about the contents of a representative’s SALN that the access to it by the public and media is made inordinately restrictive and tedious as contained in the proposed House Resolution No. 1410 on the rules referring to, among others, access to SALNs of members of the House?” he asked in a Viber message.

“If we have nothing to hide, why make public access to and disclosure of SALNs, which are public documents, extremely difficult to the extent of discouraging and deterring applicants from securing copies of said?” Lagman pointed out.

They both called on the new leadership under Arroyo to review HR 1410.

“I urge the new leadership of the House and my colleagues to collectively review and liberalize the proposed rules to assure transparency and ready access to the said SALNs,” said Lagman.

“While the loss of privacy and security threats may arise, a public official has to unmask the veil of secrecy,” he said. – Rappler.com