Trillanes case: Who is Judge Soriano of Makati? 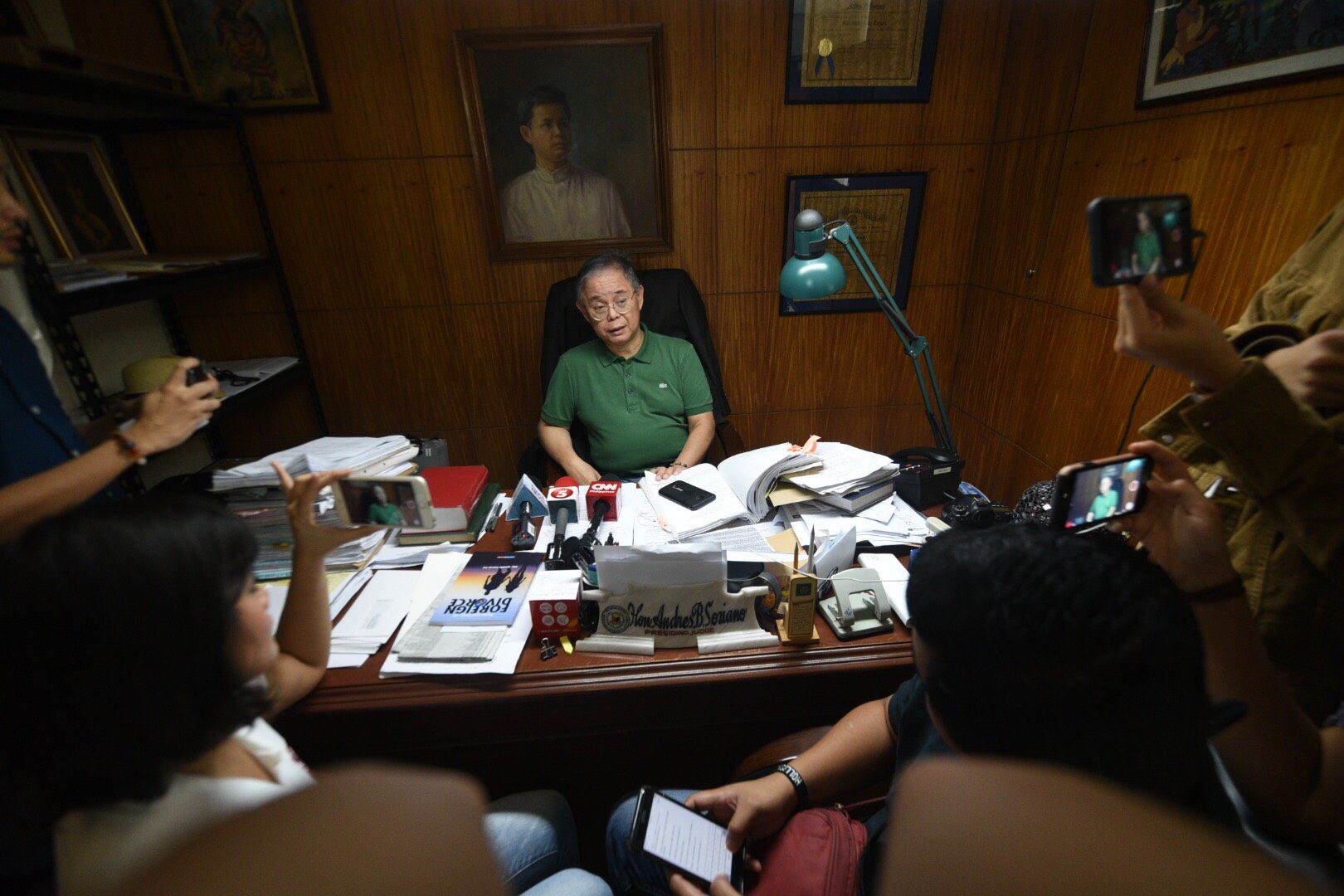 For starters, Soriano refused to instantly order the arrest of Trillanes, going against the position of the Department of Justice (DOJ) that “the application for an alias warrant of arrest no longer needs a hearing.”

“It’s just the need to listen to both parties. [The case] is not exactly standard, it’s unique in itself, so you have to listen to everybody,” Soriano said after he issued an order setting for hearing the request for a warrant, which also gave Trillanes the chance to comment on the DOJ’s motion.

Soriano said his court can tackle the validity of President Rodrigo Duterte’s Proclamation No. 572 voiding Trillanes’ amnesty, as opposed to Guevarra’s position that the lower court is an improper forum.

Soriano also said trial can resume for Trillanes, again contrary to Guevarra’s opinion that the judge just needs to promulgate the decision of court’s previous judge, who wasn’t able to hand out his judgment because an amnesty was already granted.

“I have to try to review the records with respect to that, because to my recollection, the order was issued before the…they were not able to present evidence on their part because Senator Trillanes, he already accepted amnesty, there may still be trial with respect to the defense,” Soriano said.

San Juan and Bolo did not avail of amnesty, unlike Trillanes.

“These things happened 2011, I assumed office in 2012. The only thing I handled was the decision pertaining to (San Juan and Bolo) because they are the only two who did not avail of the pardon or the amnesty,” Soriano said.

In 2015, the Court of Appeals cleared San Juan and Bolo.

This may not be totally disadvantageous to Trillanes yet, as Soriano acknowledges the peculiarity of the case. In 2011, Soriano’s predecessor Judge Rita Bascos Sarabia dismissed the coup charges against Trillanes “pursuant to the amnesty.”

“The classic rule is of course when the case has been decided, one way or the other, let’s say there is no conviction, the matter of double jeopardy sets in,” Soriano said.

Asked whether amnesty extinguished Trillanes’ crime, Soriano said: “It should, but it appears to me that there may be other issues.”

Asked whether Judge Sarabia’s dismissal of the case against Trillanes is already final and executory, Sarabia said: “Frankly, that will be a matter dependent on the assessment also of the developments right now.”

“I am not aware of any jurisprudence or lawthat is squarely in point to this case. That’s why there is a need for further study, that’s why there’s also a need to listen to the others and see what they have to say,” Soriano said.

Soriano said the court does not possess records of Trillanes’ application for amnesty, saying it should be with the Department of National Defense (DND). The DND said it is missing, as Trillanes insists they exist.

The absence of an official application was one of the two grounds why Duterte voided the amnesty, the other is that there was no admission of guilt that was required. This was disputed by Trillanes.

“This is like a chess game, it depends on what parties move, then I will know how, when and how I will be able to resolve,” Soriano said.

Soriano said “no one has approached me for anything,” in response to a question whether there is pressure on him from the Duterte administration.

“If somebody asks for my inhibition, I will cross the bridge when I get there. It’s just one of those cases, if they do not believe that I can handle this properly or fairly, I’m not here to hang on to the case. But there is no reason for me to voluntarily inhibit as far as I can see,” Soriano said. The 62-year-old Soriano was previously the presiding judge of Malolos RTC Branch 13 in Bulacan.

In 2002, a defense counsel filed an administrative complaint against Soriano for allegedly exhibiting bias during hearing. The Supreme Court (SC) Third Division cleared Soriano, and warned the complaining lawyer against “using language which is abusive, offensive or otherwise improper.”

In 2010, Soriano was among the contenders for the position of Supreme Court (SC) administrator, according to a Newsbreak report. The position, however, eventually went to Midas Marquez.

Soriano was appointed to the Makati RTC Branch on March 27, 2012 by then president Benigno Aquino III.

In 2015, Soriano was shortlisted for a justiceship at the Court of Appeals. But Aquino chose fellow Makati Judge Perpetua Atal-Paño over him.

In 2016, Soriano convicted the president of IT firm Cytronics International Inc (CII) for failing to remit the Social Security System (SSS) contributions of its employees.

Before venturing into public service, Soriano worked as a private practitioner affiliated with the Puno Puno & Carlos Law Firm from 1986 to 1989.

Soriano is set to retire on November 30, 2026. – with reports from Jodesz Gavilan/Rappler.com