Facebook Twitter Copy URL
Copied
This is how they voted on the Train Law, hero's burial for Marcos, martial law extension, Bangsamoro Organic Law, and other issues during the 17th Congress

MANILA, Philippines – Seven senators of the 17th Congress are eyeing reelection in 2019.

Four of them are running under the administration banner of either PDP-Laban or Davao City Mayor Sara Duterte’s Hugpong ng Pagbabago: Pimentel, Ejercito, Angara, and Villar.

Binay is running under the United Nationalist Alliance, the party founded by her father, former vice president Jejomar Binay, while Poe is running as an independent candidate. Aquino is on the opposition slate.

Check how the 7 senators voted on key issues and legislations during their current term. Based on data obtained by Rappler, Senator Villar voted in favor of the administration in all the issues presented in the article. The other 6 senators, including key ally Pimentel, voted against the administration’s agenda at some point. (READ: Where do 2019 senatorial bets stand on key national issues?) 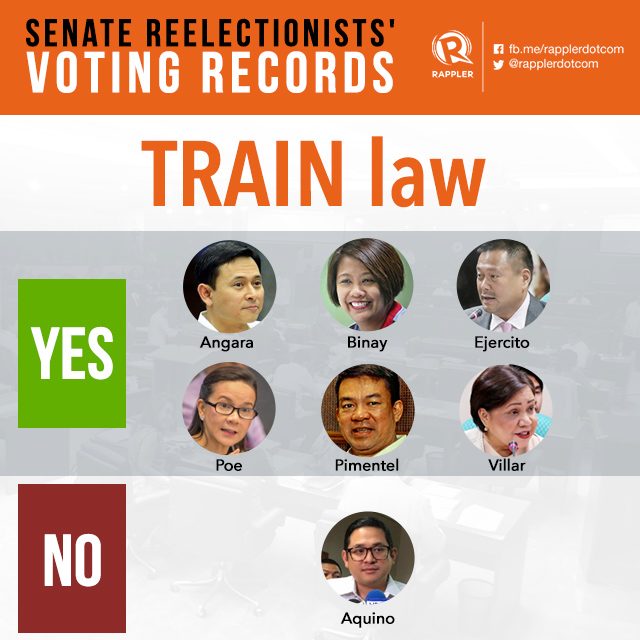 This is the most significant and controversial legislation pushed by President Rodrigo Duterte. It initially promised higher revenue and income for middle-income Filipinos in exchange for more expensive fuel. The law, however, is among those blamed for high inflation. (READ: Duterte’s tax reform: More take-home pay, higher fuel and auto taxes)

With Filipinos reeling from the high prices of basic goods, the Train Law is expected to be among the key issues during the 2019 campaign. (READ: Higher inflation: Is Train to blame?)

Of all reelectionist senators, only Aquino voted against it during the ratification of the bicameral conference committee report. The other oppositors included senators Panfilo Lacson, Risa Hontiveros, and Antonio Trillanes IV.

In Aquino’s explanation of vote, he questioned the law’s effect on poor Filipinos. While he said 6 million Filipinos would benefit from it, he cited Department of Finance studies showing 40% of Filipinos would carry the brunt of the tax reform because of the price increases.

The rest of the reelectionists – Angara, Binay, Ejercito, Poe, Villar, and Pimentel – voted yes, with Angara sponsoring the measure as chairman of the Senate committee on ways and means. Pimentel also filed a measure similar to the proposal of the Department of Finance.

With public backlash, many senators, including Ejercito, who earlier voted for the bill’s approval, are now calling for its suspension.

Poe and Villar defended their Train Law vote when they filed their certificates of candidacy (COC).

“This is not all Train Law’s fault. Traders also took advantage of the situation, of the law to raise their prices…. It’s a lesson learned. We will be guided in the future that when we project inflation, we should not only consider real things, but also the bad things that are happening here,” Villar told reporters in a mix of Filipino and English.

“We supported the Train Law because the President said the government needed funds. They said there will also be mitigating measures for the poorest Filipinos, but the problem is they collected the money but the assistance for them was not given quickly,” Poe said in an interview.

Angara has remained quiet on the law, which he shepherded in the chamber. He, however, said that Train 2 or the Trabaho Bill will likely have a hard time in the Senate. It is expected, as no candidate would want to impose higher taxes during an election season.

Resolution against a hero’s burial for Marcos 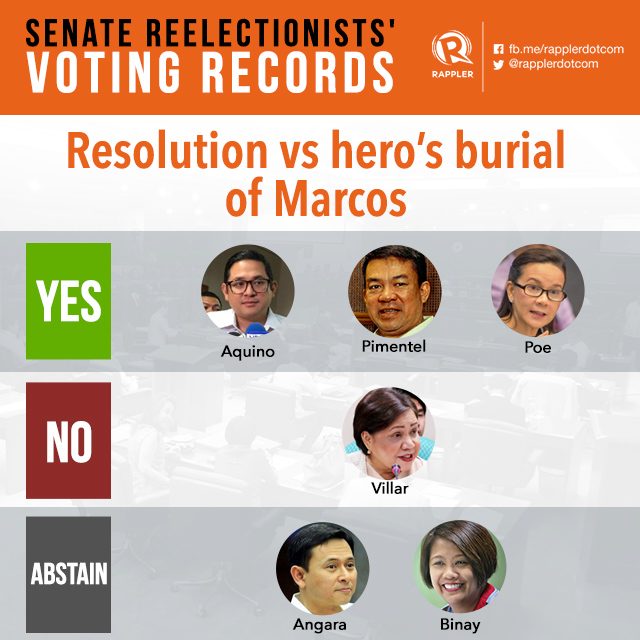 In November 2016, the Senate rejected the resolution authored by Hontiveros opposing the hero’s burial for the late dictator Ferdinand Marcos. The resolution failed because it lacked the votes needed.

Among the 7 reelectionist senators, only 3 voted in favor of the resolution: Pimentel, Aquino, and Poe. Villar opposed the measure while Angara and Binay abstained.

Senator Binay’s father was a victim of Martial Law and was among the human rights activists then. Poe, for her part, ran as president in 2016 and was welcomed by the Marcos family in Ilocos Norte.

Resolution vs Sereno ouster via a quo warranto petition On May 17, 2018, 14 senators filed a resolution calling on the Supreme Court to review its decision granting the quo warranto petition and ousting Chief Justice Maria Lourdes Sereno.

The resolution, citing the 1987 Constitution, said the SC decision “sets a dangerous precedent that transgresses the exclusive powers of the legislative branch to initiate, try, and decide all cases of impeachment.”

Of the 7 reelectionist senators, 4 signed the resolution: Pimentel, Poe, Angara, and Aquino,

Binay, Ejercito, and Villar either did not sign the resolution or were unable to do so.

The Senate has so far not voted on the resolution, as the measure remains pending on second reading. In 2017, 14 senators filed a resolution declaring that the Senate has a say in the termination of any treaty or international agreement. The filing came after President Rodrigo Duterte himself declared intentions to scrap the Philippines-US Visiting Forces Agreement and to withdraw from the International Criminal Court (ICC).

It was principally authored by then-Senate president pro-tempore Franklin Drilon but was signed by 13 other senators as co-authors.

Among the reelectionist senators, only 3 signed it: Aquino, Angara, and Ejercito.

Binay, Poe, Pimentel, and Villar either did not sign it or were unable to do so.

Until now, the Senate has yet to decide on the measure after it was effectively blocked by neophyte Senator Manny Pacquiao, a staunch ally of Duterte.

It was this failure to adopt the resolution that ties the hands of senators on Duterte’s withdrawal from the ICC. The treaty, approved in 2011, did not include a provision mandating Senate’s concurrence in the termination of the agreement.

In a move seen to counter this, the current Senate began inserting such provision in treaties and agreements it approved during the 17th Congress, starting with the Asian Infrastructure Investment Bank agreement. This, however, does not cover old treaties, such as the ICC. 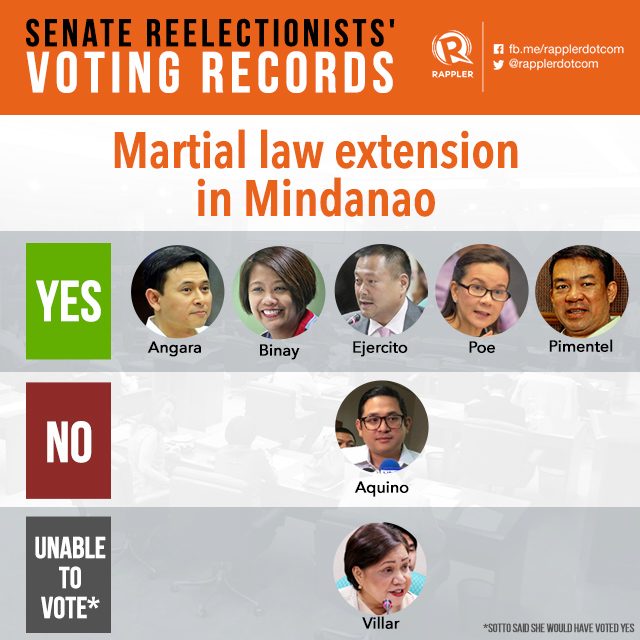 On December 13, 2017, the Senate voted 14-4 to extend President Rodrigo Duterte’s martial law in Mindanao for one year or until December 2018.

Aquino was the only reelectionist senator who voted against it.

Angara, Binay, Ejercito, Poe, and Pimentel voted in favor of the extension. Villar was present during the joint session, but she was not able to cast her vote. Then-Senate majority leader Vicente Sotto III said Villar “would have voted yes.”

While the senators eyeing reelection might have voted differently on controversial measures, they voted the same on popular and less divisive issues, such as:

In the case of the laws on free tuition in state universities and colleges and on free-wifi in public spaces, Angara and Pimentel were unable to vote.

Angara, however, was a co-sponsor of the free tuition bill, while Pimentel, who was Senate president at the time, supported both bills, which were pushed by Malacañang in its priority legislative agenda. – Rappler.com