IN CHARTS: Don’t credit China for Philippine growth just yet 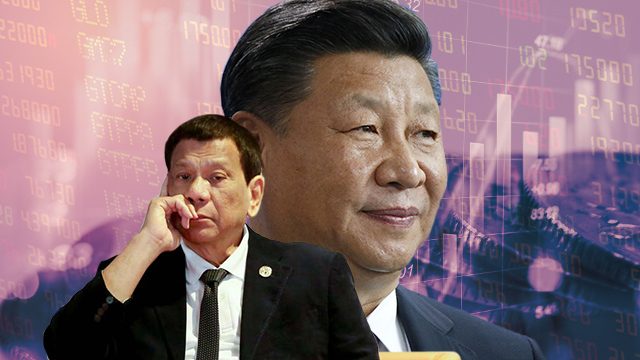 Facebook Twitter Copy URL
Copied
The bulk of foreign direct investments and project loans still comes from traditional trade partners like Japan and the United States, and not from China

MANILA, Philippines – President Rodrigo Duterte has nothing but sweet words for China, as he hopes to forge stronger ties with the global superpower for economic gain.

Duterte once said he needs China “more than anybody else” and “will not say something which is not good” against the global superpower.

However, data shows that the Philippines has yet to fully benefit from the kind words of Duterte.

The anticipated boom of foreign direct investments (FDI) from China has yet to materialize. Data from the Philippine Statistics Authority (PSA) shows that FDI from China barely grew compared to other trading partners.

China continued to be one of the Philippines’ top trading partners.

In 2017 alone, the two-way trade between the two countries topped $50 billion, while Philippine exports grew 10.5%.

The Philippines supplied mostly electronics and minerals to China.

Bananas, pineapples, and mangoes were among the most popular agricultural goods that China imported from the Philippines.

The Philippines is also banking on Chinese loans to fund several projects of the Build, Build, Build program.

However, most projects have yet to start construction. Out of the 75 projects, less than 10 have started construction in 2018.

Socioeconomic Planning Secretary Ernesto Pernia previously admitted that the Official Development Assistance (ODA) from China is not moving as fast as they had hoped and are considering other options to fund the projects.

While some Chinese visit for only a week, others opt to stay for a longer period of time.

The online gambling industry experienced a boom and continues to infuse cash into the economy.

However, Chinese workers’ cash have driven out local residents in key areas in Metro Manila.

According to a report by property firm Santos Knight Frank, residential rental rates in the Bay Area surged by a whopping 62.2% during the 2nd quarter of 2018 compared to the same period in 2017. This rate of increase is much faster compared to the other central business districts in Metro Manila.

China’s contribution to the Philippine economy remains to be a mixed bag.

Despite the lackluster trade and investment numbers, China’s influence in key services like telecommunications and rumors of joint oil exploration are starting to cause jitters among big business, nationalists, and security experts. – Rappler.com