MANILA, Philippines – When Mindanaoans step out to vote in the Bangsamoro plebiscite on Monday, January 21, they will determine whether or not the envisioned new autononomous regional government will expand its territory or remain limited to its current set-up.

But the future Bangsamoro Autonomous Region in Muslim Mindanao (BARMM) is merely a political structure. For decades, it's the power brokers – the political clans, Moro rebel groups, and even terrorist groups – that have shaped and will shape past and future autonomous regions in Mindanao. (READ: 6 scenarios for the Bangsamoro vote)

They hold sway over people, have access to money, arms, and the bureaucracy, and influence politics and security in the provinces, cities, towns, and barangays (villages) that will comprise the BARMM – if the BARMM wins a “yes” vote on January 21.

Who and what are these powerful groups?

Rappler maps out where these various groups hold influence in the territories that could comprise BARMM – the provinces of Lanao del Sur, Maguindanao, Sulu, Tawi-Tawi, Basilan, the city of Cotabato, 6 towns of Lanao del Norte, and 67 barangays (villages) in North Cotabato.

Click the "next" icon or gray dots under the map to navigate through 3 maps – a map for political clans, a map for Moro separatist groups, and a map for extremist and terrorist groups.

The maps only show their clout on the provincial level.

If a group holds influence only in some or a few parts of that province, their clout is visualized through vertical and horizontal lines, respectively – to show the limited nature of the group’s power there.

Data on the powerful political clans in each province was largely sourced from the non-government International Alert Philippines. We also verified and counter-checked the data in interviews with Professor Julkipli Wadi of the University of the Philippines (UP) Institute of Islamic Studies and other longtime residents and observers in ARMM. 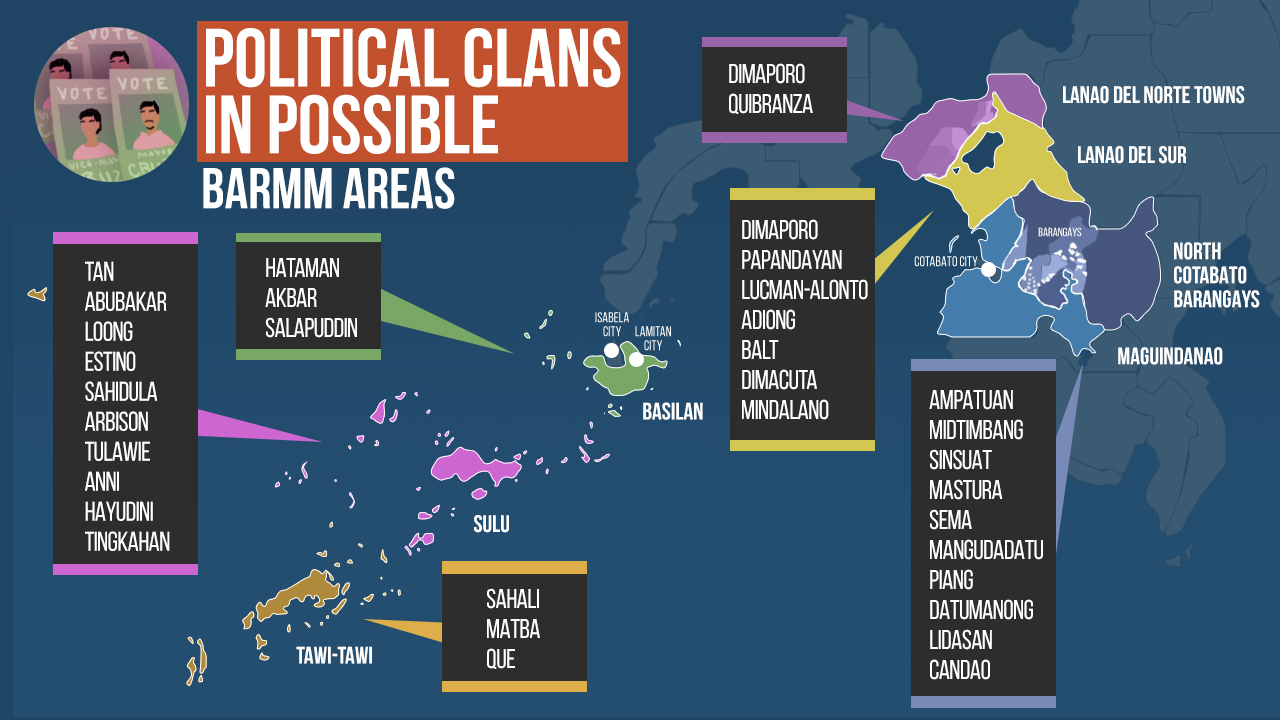 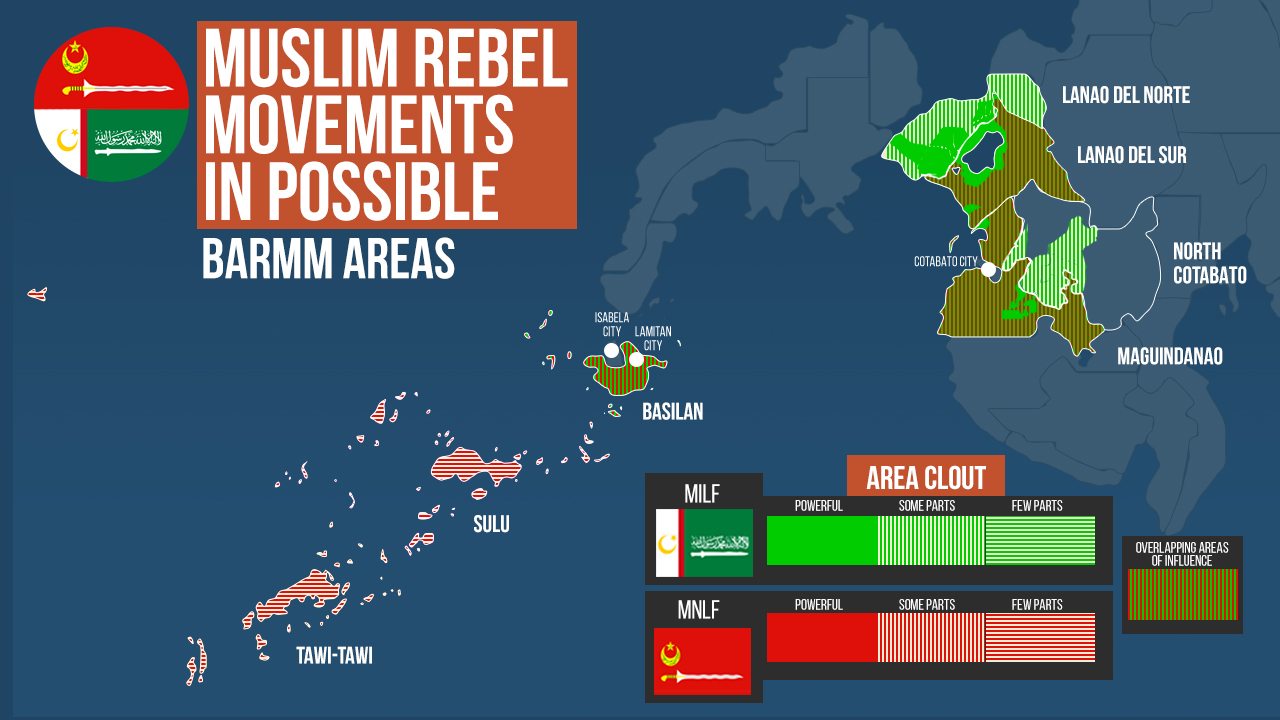 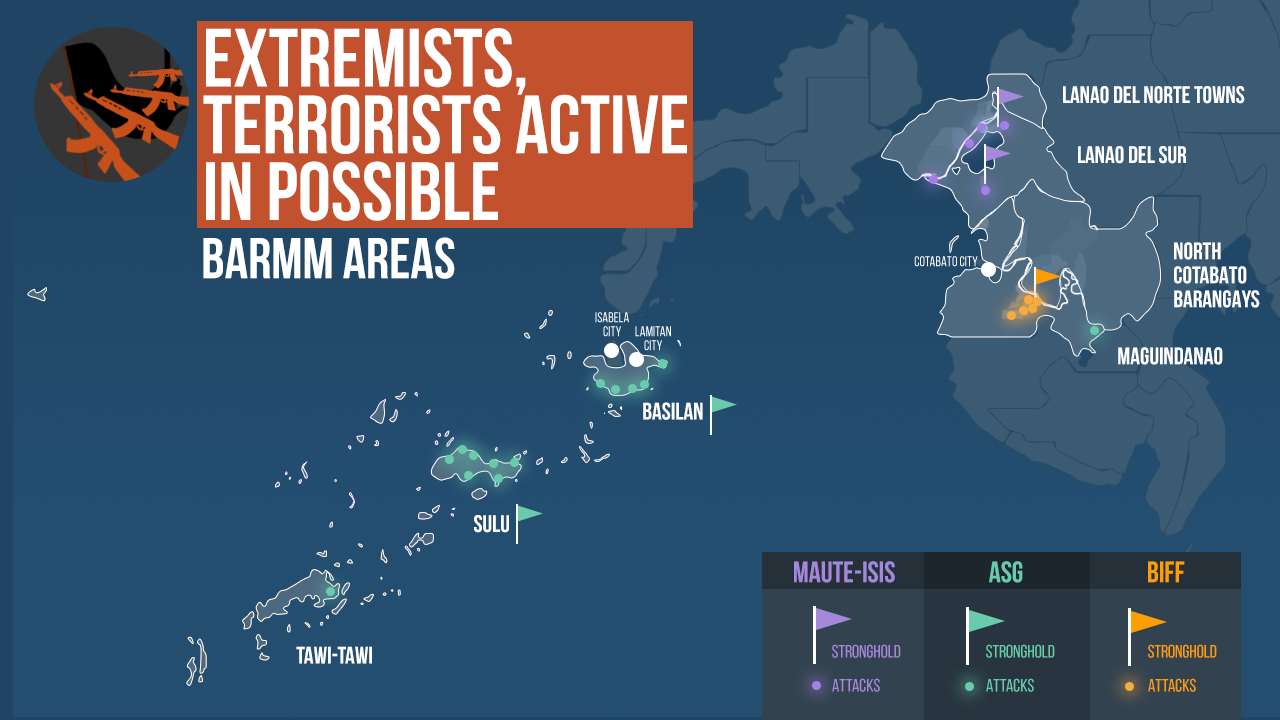 Based on data from International Alert, fatal attacks occurred from 2016 to 2017.

Earlier, we wrote about 6 scenarios for the plebiscite.

But under BARMM, what’s next for these groups and clans?

It's the same situation faced by the the MNLF more than 2 decades ago, after it signed a peace agreement with the Ramos administration. MNLF founding chairperson Nur Misuari eventually was elected governor of the Autonomous Region in Muslim Mindanao (ARMM), but even his own comrades later accused him of mismanagement and incompetence. Some of them formed factions to oppose him.

“One option is, for political stability, they won’t rock the boat before 2022. They won’t collect taxes. Anyway, their justification will be, we have money, because of the block grant,” Lara told Rappler in an interview.

In the Bangsamoro Organic Law, the BTA will be allocated transition funds from the national budget and will get the remaining funds intended for ARMM.

But to do so, they have to convince the people of BARMM that their style of governance works. The pressure is on them to deliver results in the next two years: reduced poverty, more businesses and jobs, and stability among ethnic clans and economic classes.

People of the Bangsamoro region will also look to the group to see how well they maintain peace and security and deal with high-stakes issues such as the rehabiltiation of war-torn Marawi City.

“That can also get them support. If they say that ‘No, we're going to collect taxes and we're going to show people how we're going to use those taxes.’ But then with that particular action, they will square off with the clans,” said Lara.

Meanwhile, BARMM poses risks as well as benefits for the political clans.

The political clans will definitely want their members in government posts, especially in the new parliament that will pass laws and decide on the region’s budget. Seats in this parliament will be coveted, since the region’s budget is assured, given the block grant (around P60 billion) stipulated in the Bangsamoro Organic Law.

There are also already leaders of certain political clans eyeing the Chief Minister position in 2022. Will they succeed in replacing Murad or will Murad himself get elected for another term?

If BARMM is able to improve the lives of people in the region, naturally the Abu Sayyaf, BIFF, and Maute Group will have a harder time attracting adherents to their radical cause. There'd be less grievances to exploit and less fertile ground to plant extremist thought.

If things get worse in BARMM – deteriorated qualify of life, more friction among ethnic groups and clans, heightened discrimination – it is possible the opposite would happen. More BARMM residents would have reason to give up on the government and turn to these extremist groups instead.

A sore point is Marawi, where rehabilitation is slow and which Muslim radicals use to recruit the youth to their cause. (READ: Seeds of insurgency: The youth of Marawi)

It’s up to the future BTA and national government to ensure these terror groups will have less capacity to wreak havoc. Such efforts would include controlling firearms in the region, reducing capability to make bombs and carry out attacks, and stemming their access to financial sources, among others.

But there is a 4th power player: the people of the Bangsamoro themselves.

The residents of BARMM hold the power of the ballot. They decide, by a stroke of the pen, who will win a seat in the Parliament. They can decide to say no when terror groups come knocking on their doors with promises. – Rappler.com