From peace talks to plebiscite: The road to the new Bangsamoro region 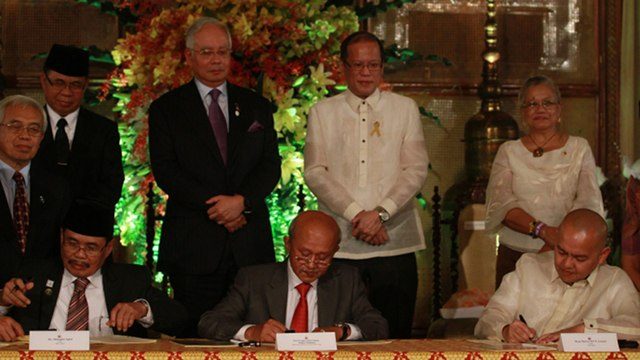 MANILA, Philippines (UPDATED) – The ratification of the Bangsamoro Organic Law on is a step closer to the finish line of decades’ long struggle for peace in Mindanao.

What happened in the two decades since the first exploratory talks began?

The government of then-president Fidel Ramos holds the first exploratory talks with the Moro Islamic Liberation Front. The talks culminate with the signing of a “general cessation of hostilities” between the two parties in July 1997.

Then-president Benigno Aquino III forms an advisory council to assist the government in the peace talks.

The two parties sign the historical framework agreement in Malacañang.

The 33rd round of peace talks – which focuses on power-sharing, wealth-sharing, and normalization in the Bangsamoro region – ends without any agreement signed between the two parties.

The 35th round of peace talks begins to settle the remaining unresolved issue in the transitional arrangements: who will lead the Bangsamoro Transition Authority? 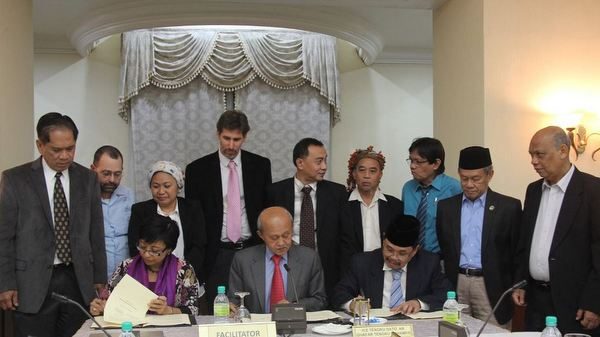 The two parties sign the Annex on Transitional Arrangements and Modalities.

The 37th round of peace talks – which was postponed – ends without any agreement being signed.

The 38th round of peace talks begins – two days after the Bangsamoro Islamic Freedom Fighters (BIFF) ambushes an army truck and attacks an army camp.

The 39th round of peace talks ends without a signed agreement.

The 40th round of peace talks opens a day after suspected members of the Moro National Liberation Front (MNLF) take over 4 barangays in Zamboanga City.

This round ends on September 20 without any signed agreement.

The 41st round of peace talks ends without any agreement on the power-sharing annex.

After delays, the parties finally sign the annex on power-sharing during the 42nd round of peace talks. A deal on the contentious “Bangsamoro waters” remains missing.

The two panels arrive at a deal on how power will be shared over the “Bangsamoro waters” during the 43rd round of peace talks. The agenda includes what will happen to the firearms of the rebels. The Bangsamoro Transition Commission completes its final draft of the proposed Bangsamoro Basic Law to Malacañang for review.

The commission submits the second draft of the proposed law to Aquino. Several investigations and congressional hearings are conducted in the aftermath of the deadly Mamasapano clash. The Senate investigation is headed by Senator Grace Poe.

Congress leaders set the end of the second regular session (June 30) as the new deadline for the passage of the Bangsamoro Basic Law.

A Senate panel report, which holds Aquino “ultimately responsible” for the botched operation, is submitted. The PNP, in its report, implicates resigned PNP chief director general Alan Purisima, adding that Aquino bypassed the chain of command in the PNP.

The Senate continues its deliberations on the BBL following the submission of reports on the Mamasapano clash. After a marathon of hearings, the House Ad Hoc Committee on the BBL approves the draft and the committee report of the proposed bill – the Basic Law for the Bangsamoro Autonomous Region (BLBAR).

The 16th Congress fails to pass the BBL before it adjourns to give way to the campaign period.

President Rodrigo Duterte is sworn into office. The first president from Mindanao, Duterte vows to finally bring peace to the region.

The two parties also agree to expand the Bangsamoro Transition Council (BTC) from 15 to 21. The committee submits the draft to Duterte.

As the House awaits the formal submission of the draft BBL by the BTC, former president and then- Pampanga-representative Gloria Arroyo files her own version of the law, which she says, “truly reflects the aspirations of our Muslim brothers and sisters as well as the indigenous brethren, representation to Indigenous Peoples, women, the sultanates, and other key stakeholders.”

Dureza says Duterte wants to first come up with a “game plan” for smoothing out some of the contentious provisions of the proposed BBL before certifying it as urgent.

Duterte says he is not confident that the proposed BBL is allowed by the 1987 Constitution.

Duterte certifies the proposed Bangsamoro Basic Law (BBL) as urgent – a day before Congress adjourns. The release of certification comes after his meeting with Congress leaders and “much deliberation,” according to then-presidential-spokesperson Harry Roque.

The House of Representatives, on the last day of session, approves the proposed BBL.

The Senate, meanwhile, passes its own version past midnight.

The bicameral conference committee finalizes the bill that would establish and grant greater autonomy to a new Bangsamoro region after more than a week of deliberations to reconcile the differing provisions of the House and Senate versions.

The Senate ratifies the bicam report on July 23 while the House of Representatives finishes on July 24.

Duterte signs the landmark Bangsamoro Organic Law that will pave the way, among others, for the new Bangsamoro Autonomous Region in Muslim Mindanao that would have greater fiscal autonomy, a regional government, parliament, and justice system, among others. (READ: After Bangsamoro law, a bright yet bumpy path to peace)

The Commission on Elections announces that the plebiscite on the landmark law will take place on January 21, 2019. It sets the campaign period from December 7, 2018 to January 19, 2019. The Philippine Constitution Association (Philconsa) asks the Supreme Court to declare the BOL “unconstutitional, null and void.” It urges the High Court to issue a temporary restraining order on the implementation of the law.

President Rodrigo Duterte makes a last minute campaign for the ratification of the Bangsamoro Organic Law (BOL) while in Cotabato City, saying that the people “should forget the bitterness of the past and look forward to the future.”

Cotabato City Mayor Cynthia Guiani Sayadi once again defends her opposition to the Bangsamoro Organic Law (BOL). The mayor is the champion of the “no” vote in the Bangsamoro plebiscite and has reported several instances of alleged harassment against her. Voters in the Autonomous Region in Muslim Mindanao (ARMM), Cotabato City, and Isabela City, flock to their respective polling centers to cast their “yes” or “no” votes on whether the Bangsamoro Organic Law should be ratified and an expanded Bangsamoro region created.

Cotabato City – the “crown jewel” of the region – votes to join the proposed BARMM, according to unofficial results from the City Board of Canvassers as of 8:42 pm on Tuesday, January 22. The city had twice before rejected inclusion in the ARMM – in 1989 and in 2001.

The National Plebiscite Board of Canvassers (NPBOC) announces the official results of the plebiscite, saying the BOL is “deemed ratified.”

. – with reports from Michael Bueza/Rappler.com

This timeline will be updated as results come in.
Top photo by Ben Nabong/Rappler