Who were targets of disinformation in 2018?

Feb 5, 2019 6:30 PM PHT
Vernise Tantuco
Facebook Twitter Copy URL
Copied
The Aquinos, the Catholic Church, and critics of Marcos and Martial Law, are the top targets of disinformation in the 133 claims that Rappler fact-checked in 2018 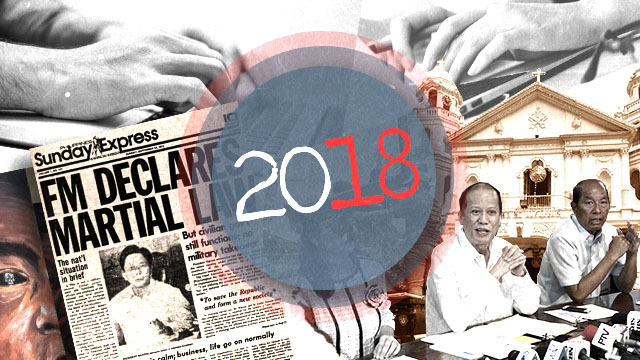 MANILA, Philippines – There were many false and misleading claims made online and in real life last year, most of which were used to harm influential people and their reputations.

According to data gathered over an 8-month period from Rappler’s fact-check stories (April to December 2018), the Aquinos took the biggest hit that year, followed by critics of the Marcoses and Martial Law, and then the Catholic Church.

The misleading or false claims were made by public officials and influential personalities. These claims that circulated on social media were found to potentially affect public safety or influence public opinion. We gathered these by monitoring public officials and by using tools available to us like CrowdTangle. These were complemented by readers who sent suspicious claims to us via email and through Newsbreak’s official Facebook page. (READ: How we do our fact-check)

Aside from the 3 top targets, the rest of the top 10 people or groups who were hit by disinformation were Senator Antonio Trillanes IV, Vice President Leni Robredo, Senator Risa Hontiveros, President Rodrigo Duterte, China, the mainstream media, and the Liberal Party.

Most of them were hot topics during those months, which probably prompted the surge of false reports about them.

Also in September, President Duterte revoked the amnesty of Trillanes, causing him to be the subject of many claims. (LIST: False claims of Duterte, Panelo about legal issues on Trillanes amnesty)

Meanwhile, China, media organizations, and the Liberal Party were tied, having 5 false claims each.

Media organizations and individual journalists, like Rappler and Rappler CEO Maria Ressa, were also under fire last year, as threats to press freedom were rampant.

The opposition Liberal Party (LP) was also targeted by false claims, some of which used the term “dilawan.” The term is often used by those critical of LP members, implying that these claims may have been concocted by critics of the Liberal Party or those strongly supportive of the administration.

Not surprisingly, there were quite a few claims that attacked politicians who are not supportive of the Duterte administration, including those that singled out former chief justice Maria Lourdes Sereno and Senator Leila de Lima, along with others who attacked “members of the opposition” in general.

There were also claims that attacked the administration and people who align themselves with it, including Duterte himself. Former Presidential Communications Operations Office assistant secretary Mocha Uson (one claim), Senator Alan Peter Cayetano (two claims), and former police chief Ronald dela Rosa (one claim) took a few hits in 2018.

Celebrities and ordinary people weren’t safe from disinformation either. Actors Jessy Mendiola and John Lloyd Cruz, and Mr Pure Energy Gary Valenciano were all said to have died last year – even if they’re still very much alive.

Viral internet personalities were also victims of death hoaxes, like Christine Estepa, aka the “5-minute girl,” or the “marijuana boys,” who took a video of themselves smoking marijuana while cursing at the President.

In a span of 8 months, we checked 166 claims in total; some of our fact check articles included more than one claim. Out of the 166 we checked, we excluded those that did not have a specific target, but were instead spread with the purpose of benefiting certain people.

The result was 133 false or misleading claims that targeted or attacked specific people or groups. Out of the 133, the Aquinos were the focus of 15 claims, critics of the Marcoses and Martial Law were the target of 14 claims, and the Catholic Church was the focus of 11 claims.

In 2019, Rappler will continue to call out false and misleading information, whether from websites and social media, or from the mouths of people in power.