Manila Water’s supply crisis: What we know so far Facebook Twitter Copy URL
Copied
The House and Senate are set to launch separate probes into the water crisis. Rappler explains the facts and lists other questions that still need answers.

People from all walks of life lined up for water, after services were suddenly cut off last March 7.

This has been the capital’s worst water fiasco in recent history, it was almost unthinkable.

However, the problem had long been begging for immediate action from state regulator Metropolitan Waterworks and Sewerage System (MWSS) and water concessionaires.

Both chambers of Congress will attempt to get to the bottom of the problem. The House of Representatives will probe into the matter on Monday, March 17, while the Senate will launch its own investigation the following day.

Rappler lists down what Manila Water and concerned government agencies have said in relation to the problem and what they have done to resolve it. This is what we know so far.

Where does Metro Manila draw its water from?

Metro Manila is serviced by two private companies for its water needs.

Maynilad covers the west zone, specifically the cities of Caloocan, Las Piñas, Muntinlupa, Malabon, Navotas, Parañaque, Pasay, Valenzuela, most of Manila, and portions of Quezon City and Makati. It also serves some cities in Cavite.

Meanwhile, embattled Manila Water is responsible for providing water to the cities of Marikina, Pasig, Pateros, San Juan, Taguig, most of Quezon City, and some areas of Manila. It also caters to the water needs of some areas in Rizal.

Both companies draw water from the Angat Dam in Norzaragay, Bulacan, which provides around 96% of the entire demand of Metro Manila. The dam lets out 4,000 million liters per day (MLD) for both concessionaires. Out of this figure, 2,400 MLD is allocated for Maynilad, while 1,600 MLD is sent to Manila Water. 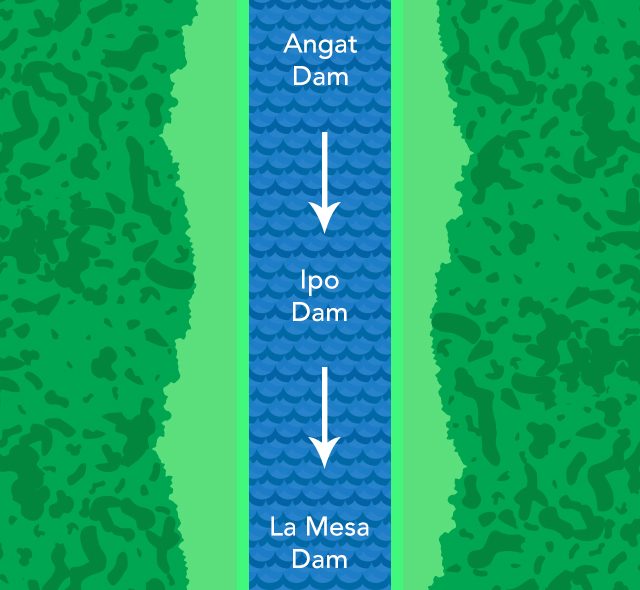 What caused the service interruptions?

Manila Water said it can no longer keep up with the demand, as it has gone up to an average of 1,740 MLD, higher than the company’s Angat Dam allocation of 1,600 MLD.

The deficit is being supplied by water from the La Mesa Dam in Quezon City.

Manila Water said it had already anticipated a shortage for March, given an anticipated light El Niño.

We can liken La Mesa Dam to a basin. Even though water flow from Angat Dam was steady, it would take a while for it to be filled up. See illustration below: Because of the low water level of La Mesa Dam, water can no longer reach the gates of the aqueducts, as illustrated below: The Ayala-led company already deployed floating pumps to draw water out from the dam.

Did Manila Water anticipate the problem?

With all the red flags and the numbers not looking good, Manila Water said it planned network adjustments to balance water supply allocation across distribution areas.

They planned to gradually reduce pressure, affecting only some areas at a time. Manila Water announced this plan during the 1st week of March.

However, the company also admitted that they assumed customers would collect water only during regular hours. But when the advisories were sent out, the demand surged even from areas not covered in the announcements.

These events, the company said, caused the service interruptions – particularly in communities that did not get advisories.

Manila Water insisted they had predicted as early as 2010 that water supply would be insufficient, given the population boom in the capital.

In fact, Manila Water said the crisis could have happened in early 2018, but a typhoon somewhat “saved” the city from it and filled up the dams with much-needed water.

Moreover, Manila Water said it had proposed several projects and potential water sources, but these were not given the green light by MWSS.

Open the bypass, solve the problem?

Amid the chaos, a former MWSS employee commented on a Facebook post of MWSS Chief Regulator Patrick Ty, insisting that there was a seemingly simple solution to the water problem.

Former MWSS employee Angel Salazar said the shortage could be resolved by simply opening the bypass facility, which diverts water from Angat Dam directly to La Mesa Dam and the treatment facilities.

In a statement, Maynilad said the bypass gate is controlled by Manila Water and MWSS has nothing to do with it.

Meanwhile, Ty insisted that the water being used by Metro Manila and Rizal were from the bypass. He also said the bypass was never closed.

Ty said the high water demand was still the reason for the supply shortage. Was it done on purpose?

Another popular speculation that circulated on social media was that the shortage was orchestrated to justify the construction of the China-funded Kaliwa Dam in Quezon Province.

The controversial dam has been in the pipeline for over 3 decades, but has been stalled by heavy opposition from environmentalists and communities in Quezon.

The rage on social media was triggered further by Finance Secretary Carlos Dominguez III‘s statements on Kaliwa Dam and how it would “absolutely” solve the water crisis.

Manila Water already dismissed the speculations and insisted they would never do anything to tarnish their “world class” service.

What has been done by concerned agencies and companies?

President Rodrigo Duterte ordered MWSS and water concessionaires to “release” water from Angat Dam good for 150 days. While it sounded decisive to some, concerned agencies were perplexed.

MWSS Administrator Reynaldo Velasco said the President was ill-advised on the matter. There simply was also no way to release water for good for 150 days (or some 600,000 MLD) due to infrastructure limitations.

Water services have gotten better recently, due to interventions from government and with the help of Maynilad.

The government is drafting an executive order which upgrades the National Water Resources Board (NWRB) to a body under the Office of the President for “policy, direction-setting, and the integration of all government efforts pertaining to water.”

While the government is scrambling to come up with long-term solutions, medium-term patches were rolled out and resulted in better water services.

MWSS ordered the National Water Resources Board to activate 101 deep wells to supply an additional 101 MLD.

Maynilad also shared an initial 20 MLD through a cross border flow to augment the water supply needs of Manila Water. It will reach 50 MLD by April. (READ: Maynilad to share supply with Manila Water)

The Pangilinan-led concessionaire also gave an additional 10 MLD of their raw water allocation from Angat Dam.

San Miguel Corporation’s Bulacan Bulk Water also stepped in by providing potable water from its untapped 140 MLD through trucks and in coordination with local government units and MWSS.

In light of the investigation that both chambers of Congress will initiate, the following questions still beg for answers: