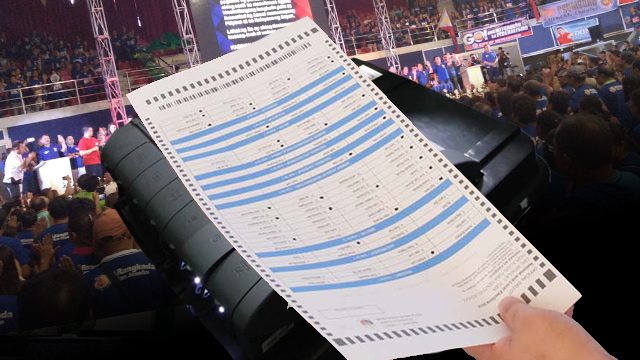 MANILA, Philippines – There has been little doubt that ruling party PDP-Laban has gained the support of politicians eager to have the popularity of its chairman, President Rodrigo Duterte, boost their own candidacies in the local scene.

Around 43,000 candidates are vying for nearly 18,000 local positions, from governor to district representative to city or municipal councilor.

Among these, there are 25 provinces where the campaign atmosphere is expected to be more intense due to the one-on-one gubernatorial races. They are the following:

Of this, 18 are being contested by Duterte’s party mates in PDP-Laban. These races are in the following areas:

The following are the legislative districts where PDP-Laban candidates are locked in one-on-one races:

According to Ela Atienza, chairperson of the University of the Philippines Political Science Department, there are more PDP-Laban bets in these one-on-one local races due to the common practice of politicians switching to whatever is the ruling party.

“Politics in the Philippines – due mostly to the constitutional framework, electoral and party system laws and culture – exhibit weakness of political parties and party loyalty or discipline,” Atienza said.

“Political parties are only useful as machineries for candidates, and personalities dominate in a first-past-the-post single-member district system. What we usually see is, whoever is the President, many politicians will gravitate toward the party of the President.”

Gravitating toward a popular president

According to Atienza, aligning oneself with the Duterte administration may have pay-offs for local politicians in terms of access to a national party’s resources and association with a president whose satisfaction remains high.

“The President still enjoys very high trust and popularity ratings. So, many candidates still gravitate to PDP-Laban as it appears to have most of the resources [and] being identified with the President’s party gives local politicians access to huge resources,” she said.

Atienza said local politicians may also find it in their interests to support the Duterte administration to avoid “being branded as hostile to the President, who can be very personal in terms of attacks against local critics or rivals.” Among the provinces with one-on-one gubernatorial races are 5 of the country’s most vote rich, namely: Isabela, Leyte, Negros Occidental, Negros Oriental, and Pangasinan.

These provinces have a combined 7,068,271 registered voters.

Three of the 5 most vote-rich provinces also have PDP-Laban candidates going head-to-head with independent bets in Isabela and Leyte, and with the Nacionalista Party candidate in Pagasinan.

But just how far will association with Duterte and his allies take them? This presents a challenge, Atienza said, since the President and his daughter, Davao City Mayor Sara Duterte, have endorsed competing local candidates in a number of localities. (READ: PDP-Laban and its confusing local politics in 2019)

“Right now, with the President and also his daughter enjoying high popularity, it is obvious that many politicians would like to be allied with or endorsed by them. However, in their effort to try to get as many local politicians as allies, even those who are competing for the same posts, in some local areas these multiple endorsements may no longer hold sway,” she said. “There are also fears that if the President’s allies dominate the two Houses of Congress and local positions as a result of the 2019 elections, then there might be a more overt authoritarian system in place,” she added.

At this point, Atienza said, “most politicians are also very calculating and may jump ship to protect their long-term interests.” – Rappler.com