TIMELINE: The GCTA law and the controversy it has stirred 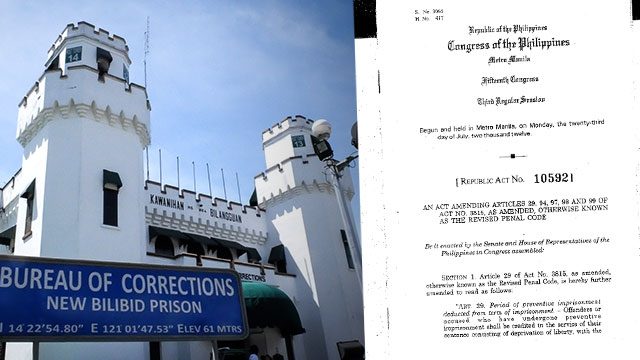 Facebook Twitter Copy URL
Copied
The debate now focuses on whether or not people convicted of heinous crimes should benefit from the Good Conduct Time Allowance law. What are the arguments for amendment now?

MANILA, Philippines – The Good Conduct Time Allowance (GCTA) law has been at the center of controversy after initial news about the possible early release of convicted murderer-rapist Antonio Sanchez broke.

As government officials backtracked on cutting short the prison term of Sanchez, the debate has now focused on whether or not those convicted of heinous crimes should benefit from the GCTA.

But how did the law come to be? What are the arguments for amendments?

The Revised Penal Code is signed into law. Chapter 2 lays out the specifics of “partial extinction of criminal liability,” including conditional pardon, commutation of sentence, and good conduct allowances.

The Senate passes Senate Bill No. 3064 which amends several articles of the Revised Penal Code.

The House of Representatives passes House Bill 417 which amends Article 29 of the Revised Penal Code.

Then-president Benigno Aquino III signs Republic Act No. 10592 or the Good Conduct Time Allowance (GCTA) law, which amended several articles under the Revised Penal Code, including Article 97, which lays out the allowance for good conduct for persons deprived of liberty (PDLs).

The GCTA law allows for a reduction of sentences of PDLs, depending on how well they abide by rules and regulations inside “any penal institution, rehabilitation, or detention center or any other local jail.”

The law’s Implementing Rules and Regulations (IRR) document is released. Penned by then-justice secretary Leila de Lima and interior secretary Mar Roxas, the IRR provides for a prospective application of the GCTA law.

Prospective application is seen in Section 4 of the IRR, which provides “for new procedures and standards of behavior for the grant of good conduct time allowance” and requires “the creation of a Management, Screening and Evaluation Committee.”

The IRR takes effect on April 18 of the same year.

At least 13 Bilibid inmates, represented by lawyer Michael Evangelista, file a petition for certiorari and prohibition against Roxas and De Lima, contesting the prospective application of the GCTA Law.

Lawyer Rene Saguisag files a petition-in-intervention, saying that RA 10592’s legislative history shows no intent of being prospective in character. The High Court grants the leave to intervene.

Ten inmates at the NBP’s Maximum Security Compound file a petition for certiorari and prohibition  against the prospective application of the law, saying that the IRR was “issued with grave abuse of discretion amounting to lack or excess of jurisdiction.”

In his concurring opinion, SC Associate Justice Marvic Leonen says that the prospective provision of the 2014 IRR “implies that all inmates detained or convicted prior to its effectivity can no longer be rehabilitated for a successful reintegration into society, effectively trampling upon their dignity as human beings.”

Sanchez was convicted in 1995 for the rape and murder of Eileen Sarmenta and murder of Allan Gomez – both University of the Philippines-Los Baños students – and in 1999, for the double murder of Nelson and Rickson Peñalosa. He has been in Bilibid prison for 25 years.

Justice Secretary Menardo Guevarra tells reporters that Sanchez “may actually be released,” and, in another instance, “is very likely for release.”

(That benefits all the inmates, so one of the beneficiaries will be Mayor Sanchez. Even he will be entitled to the computation of the Good Conduct Time Allowance.)

Senate President Vicente Sotto III files Senate Resolution No. 107 which seeks a review of RA 10592 with a view of amending it. Senator Panfilo Lacson supports the plan to amend the law. (READ: Amid Sanchez news, senators split on amending reduced prison term law)

Senate Minority Leader Franklin Drilon, the justice secretary at the time Sanchez was convicted, dismisses the need for amendments, saying the law is already “good.” He pins the blame on the Supreme Court which decided that a certain provision was unconstitutional.

After a massive public backlash, Bureau of Corrections (BuCor) Director General Nicanor Faeldon says that while Sanchez is qualified to avail of the GCTA, he might still have to stay in Bilibid for several more years because of misdemeanors he reportedly committed. (LISTEN: [PODCAST] Ang batas na puwedeng magpalaya sa rapist-murderer na si Antonio Sanchez)

Guevarra explains that the wording of Section 1 and Section 3 of the law makes only the inmates eligible for credit of preventive imprisonment (CPI, or the period of imprisonment prior to conviction) also eligible for GCTA (applicable only to post-conviction imprisonment).

To Guevarra, because those charged with heinous crimes are not eligible for CPI, then they are also not supposed to benefit from the GCTA. “It’s been a tough process of interpreting the wordings of a law that has certain ambiguities in its provisions. In the end, however, it is the spirit and the intention of the law that guided us in taking a position,” Guevarra says.

Presidential spokesperson Salvador Panelo echoes Guevarra in a press conference, saying that “the inevitable conclusion is that all those convicted of a heinous crime, including Mr Antonio Sanchez, would be ineligible and disqualified from availing the benefits of the GCTA.”

In a Rappler column, human rights lawyer and former SC spokesperson Ted Te says that there is a need for more objective criteria to determine good conduct. (READ: [OPINION | Deep Dive] What the GCTA law is and what it needs)

He writes that “while the GCTA is a good idea, the question of determining whether conduct falls under ‘good conduct’ to merit the GCTA may be arbitrary sans any objective standards to measure, assess, and rate such.

Raymund Narag, an expert on criminal justice, writes in his column that “there are sufficient legal and procedural remedies to make sure that the law will not be abused by the rich and powerful.” (READ: [OPINION] Media sensationalism, bureaucratic ineptitude, the common tao’s quest for justice)

Guevarra says the DOJ is “considering seriously” the need to suspend the processing of the GCTA of convicts pending a review of guidelines for the early release of inmates.

Those who are deserving to be freed early, he adds, “really have to wait a little.” (READ: Beyond Sanchez: How to improve the Good Conduct Time Allowance law)

Guevarra says the DOJ hopes the Supreme Court or Congress will be able to clarify whether or not inmates who are convicted of heinous crimes can benefit from the GCTA law.

“The DOJ will be glad to have this issue resolved with clarity and finality either by a congressional amendment of its own act or by an interpretation rendered by the Supreme Court in a proper case brought before it,” he says.

Guevarra reiterates that the processing of early release of inmates under the good conduct time allowance (GCTA) law is briefly suspended.

AKO Bicol Representative Alfredo Garbin Jr files House Resolution No. 260 which seeks a congressional investigation to help clarify whether or not inmates who are convicted of heinous crimes should benefit from the GCTA law.

In his resolution, Garbin says that the law “is a good law” but that “there is a need to determine whether the criterion used in the implementing rules of the law is consistent with the very law it seeks to implement.” – with reports from Lian Buan/Rappler.com