How they voted: Meet the chief justice aspirants for 2019 MANILA, Philippines (UPDATED) – Despite extending the deadline for chief justice applications by two more weeks, the Judicial and Bar Council (JBC) received only 4 confirmations for nominees.

With the extended deadline closed last Monday, September 2, here are the 4 applicants for the top magistrate post that will be vacated by Chief Justice Lucas Bersamin who will retire on October 18:

The Judicial and Bar Council (JBC) has set the public interviews of the 4 applicants on October 2.

It is Peralta’s 3rd time to apply for chief justice and Bernabe’s second in the automatic nominations of the 5 most senior justices. Andres Reyes Jr, who is not among the automatically nominated, is applying for the 3rd time, too.

Peralta is an Arroyo appointee; Bernabe an Aquino appointee, and the two Reyeses, Duterte appointees.

In this collection of high profile decisions from the Supreme Court, Peralta is shown to lean towards the executive or politicians, and under the Duterte administration, towards the President.

Andres Reyes and Jose Reyes Jr have consistently concurred in decisions that favored the Duterte administration.

Bernabe is consistently unpredictable, concurring in the result of all Mindanao martial law decisions but dissenting in the doctrines of decisions that gave presidents almost unbridled discretion to proclaim military rule. Bernabe dissented in the decision to uphold the arrest of Senator Leila de Lima and in the quo warranto ouster of Maria Lourdes Sereno.

Here’s how they voted: 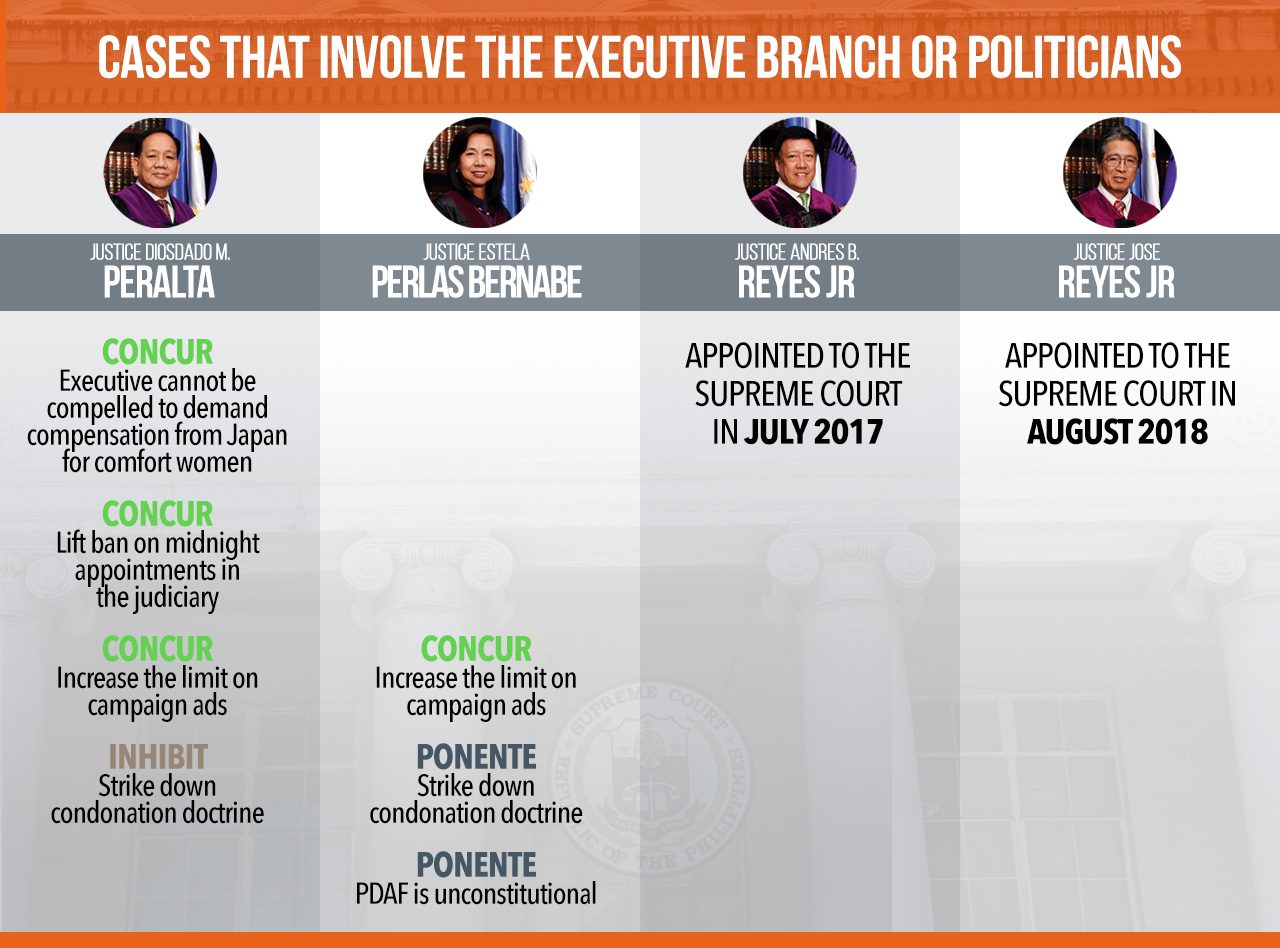 Peralta was among those who concurred in the decision that junked petitions of the Malaya Lolas comfort women to compel the government to demand compensation from Japan.

The Arroyo administration did not want to demand compensation because the issue had already been settled diplomatically through an atonement fund.

Peralta also concurred in a Bersamin ponencia that lifted the ban on midnight appointments in the judiciary. This decision can empower Duterte to pack the Supreme Court before he steps down in 2022.

Bernabe broke the stereotype that career jurists tend to favor the bureaucracy when she wrote the abandonment of the condonation doctrine, which meant elected officials can no longer be absolved of administrative liabilities if they are reelected. Peralta dissented.

Bernabe again veered from the stereotype when she wrote the decision that declared the practice of PDAF or the Priority Development Assistance Fund unconstitutional, with Peralta concurring. 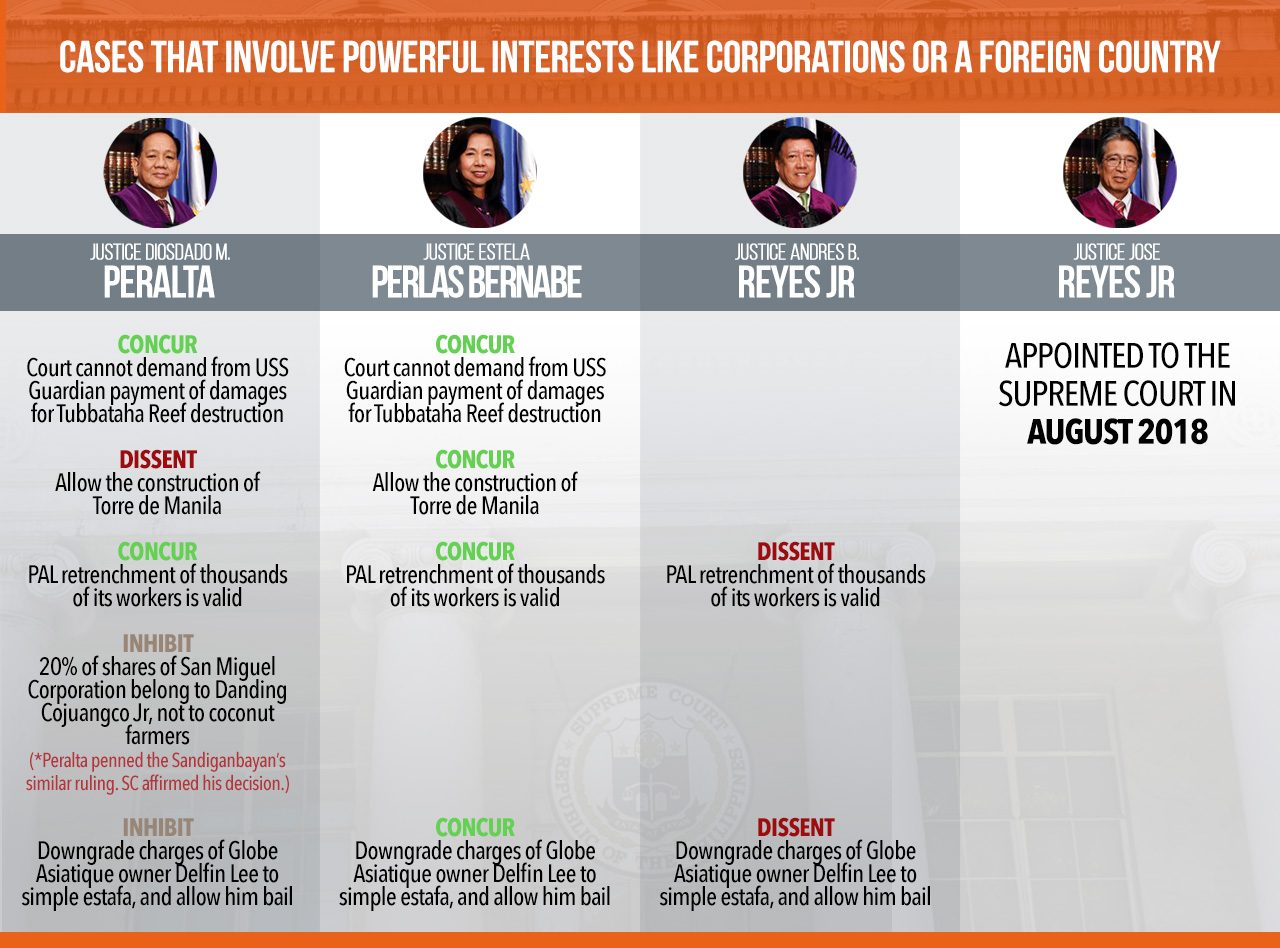 Peralta and Bernabe joined the majority in denying the petitions that sought to demand payment from the United States for damage inflicted by the USS Guardian on Tubbataha Reef.

In the coco levy case, it was Peralta who penned the ruling in the Sandiganbayan that allowed Marcos crony Danding Cojuangco Jr to retain his 20%-share from San Miguel Corporation (SMC), instead of awarding it to the farmers. Bersamin later upheld Peralta’s ruling in the Supreme Court. Peralta inhibited in the High Court for being the Sandiganbayan ponente.

Peralta concurred in the majority decision that declared the retrenchment of Philippine Airlines (PAL) workers valid, but that concurring vote was a flip-flop vote. The decision was also a flip-flop on the part of the High Court.

Reyes dissented in the PAL case, only one of the two dissents, the other one being Justice Marvic Leonen.

When the Supreme Court downgraded the estafa charges of business tycoon Delfin Lee which allowed him to post bail and set him free in the Globe Asiatique housing fraud, Peralta inhibited, Bernabe concurred, and Andres Reyes Jr dissented. In cases that involve accountability of erring government personnel, Peralta consistently voted in favor of the accused, except for when he inhibited in the decision that dismissed his colleague in the Sandiganbayan, former justice Gregory Ong, over his links to alleged pork barrel scam queen Janet Lim Napoles.

When the Supreme Court upheld the plunder charges of former senator Jinggoy Estrada over the pork barrel scam, Peralta’s opinion said there was “impropriety” in the indictment against Estrada. Andres Reyes Jr joined Peralta’s dissent.

Peralta also concurred in the controversial Bersamin ponencia that acquitted former president Gloria Macapagal Arroyo of plunder, and which introduced the main plunderer doctrine. This ponencia has been the basis for dropping all cases related to the P365-million Philippine Charity Sweepstakes Office (PCSO) intelligence fund scam, and the grant of bail to former senator Jinggoy Estrada.

While Bernabe concurred in the acquittal of Arroyo, she dissented in the main plunderer principle, saying that the law does not say anything about main plunderers.

Peralta and Bernabe voted to allow a hero’s burial for the late Ferdinand Marcos, which triggered nationwide protests that condemned human rights violations under the former dictator. All 4 applicants concurred in the recent decision to dismiss the same-sex marriage petition on technical grounds that included the petitioner’s lack of legal standing. Their separate opinions, as well as the main decision, have yet to be released as of writing.

Peralta proved to be conservative when he voted to strike down provisions of the Reproductive Health (RH) law that punished RH providers, regardless of their religious beliefs, who fail or refuse to disseminate RH information.

Bernabe dissented in striking down those provisions, but lost to the majority.

Both Peralta and Bernabe voted in favor of the Diocese of Bacolod, which allowed the parish to display tarpaulins of candidates with labels of either Team Patay or Team Buhay (Team Death or Team Life) depending on their stance on the RH Law.

Bernabe did not agree that Senator Grace Poe – who once renounced Philippine citizenship – is a natural-born Filipino. Peralta concurred in the majority, which showed progressiveness on his part to allow someone like Poe to reacquire natural born status. The decision also allowed Poe to run for president in 2016. Peralta voted to uphold the constitutionality of online libel in the Cybercrime Law. Bernabe dissented. Bernabe went against the president who appointed her when she voted against the constitutionality of the Enhanced Defense Cooperation Agreement (EDCA).

Peralta voted in favor of EDCA, and said the executive did not need the concurrence of the Senate to pass the treaty, a win for the Aquino administration at the time. Bernabe again voted against Aquino when she agreed that parts of the Disbursement Acceleration Program or DAP were unconstitutional. This decision became the basis of charges against Aquino that remain pending before the Office of the Ombudsman.

Despite his leniency toward the executive, Peralta voted against Aquino when he joined the majority decision against DAP and the decision that declared unconstitutional Aquino’s truth commission which aimed to probe corruption allegations against Arroyo. Bernabe’s concurring votes were nuanced. While she agreed with the result, Bernabe disagreed that the president’s discretion trumps all, including the Supreme Court’s. Bernabe said: “Our deference to the President must be circumscribed within the bounds of truth and reason.”

Peralta, Bernabe, Andres, and Jose Reyes all voted in favor of Duterte’s closure of Boracay island, a decision that dissenter Associate Justice Benjamin Caguioa called a realization of a tyrant. – Rappler.com