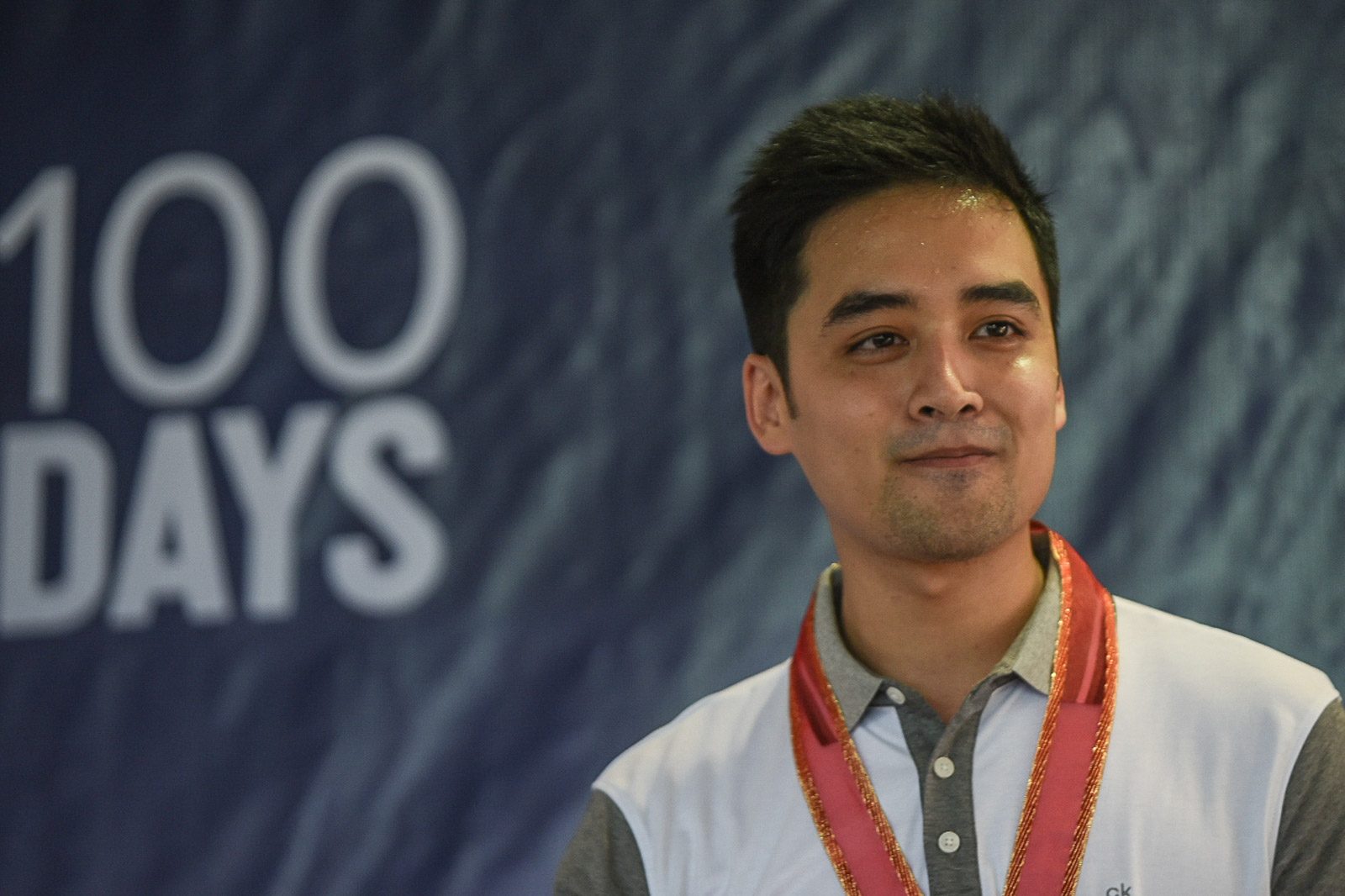 MANILA, Philippines (UPDATED) – Pasig Mayor Vico Sotto was “very happy” about the “relatively smooth” transition the city government went through during his first 100 days in office. His assumption to office was the first real change in administration in the city in almost 3 decades, and so he could be excused for expecting the transition to be pretty difficult.

“Considering that I replaced a 27-year family, the transition in Pasig has been very good,” Sotto told reporters after his State of the City Address on October 8.

And considering that Sotto put a dynasty out of power, and that he promised sweeping changes, constituents and observers alike have set their expectations high.

Here are what the Sotto administration in Pasig City has accomplished so far, in numbers:

Affordable, if not free, health care to all residents was one of Sotto’s main campaign promises, and, as mayor, he took steps to get ahead in implementing the national government’s Universal Health Care program.

Free medical services and medicines are a priority, so the city government decided to triple the health care budget for 2020 to P772.7 million, while it supplemented the budget for the rest of 2019 with P470.5 million.

The Pasig government also wants to bring those services closer to the residents of its 30 barangays, which means staffing and equipping barangay health centers.

In August, Sotto signed a partnership with the Rizal Medical Center, one of Pasig’s two public hospitals, to train doctors and and other medical professionals to provide primary health care at barangay health centers.

The city government allotted P152 million to renovate and equip those health centers.

The idea is to make health services at the barangays competent and consistent so that residents would no longer have to go all the way to the public hospitals, which end up swamped.

As for the public hospitals, the city government scrapped their income target beyond what they would receive from PhilHealth as payments for members’ claims. Rizal Medical Center and Pasig City General Hospital will no longer be required to generate further revenues for the city government, which would free them up to serve poor patients for minimal fees, if not free.

In the same vein, Sotto wants all Pasig residents to become members of the Philippine Health Insurance Corporation (PhilHealth), in line with the Universal Health Care program.

Last week, the city government facilitated the enrollment of its roughly 11,000 tricycle drivers and operators as PhilHealth members, and Sotto said a total of 15,000 new members will be enlisted by 2020.

To fill in gaps in the subsidy from the national government, the Pasig government spent P36 million to cover the new memberships.

Sotto promised quality education for Pasig’s students, and that starts with proper schoolhouses and facilities. During his State of the City Address, Sotto said the city government had allotted P1 billion for “priority renovation and repairs” of public schools for the rest of 2019.

The city government has set the budget for education in 2020 at P1.2 billion, of which P420 million will go to scholarships.

After rationalizing the city government’s finances for the tail end of 2019, Sotto said they were able to reallocate funds to add some 1,000 scholars to the initial roster of about 12,000, bringing this year’s total to 13,000 – a new record for Pasig.

With the increased budget for 2020, Pasig expects to enroll a total of 16,000 scholars.

Beyond the numbers, Sotto said he wanted all young people in Pasig enrolled in school and able to participate in the city’s governance, especially in making policies that directly involve the youth.

For starters, he revamped the scholarship system so that scholars no longer had to earn “points” by attending government events with little relevance to their studies. Instead, scholars can earn their keep by doing community service as their class schedule allows.

Although it would be easy to evict informal settlers from Pasig and relocate them just anywhere, the new mayor’s promise was to always consult them before making any decision on their fates, and to relocate them within the city as much as possible.

On that note, the city government made an initial investment of P100 million in land acquisitions for new housing projects.

Meanwhile, P62 million was allocated for repairs on existing housing projects in Pasig.

Recently, Sotto signed an ordinance keeping penalties on delayed payments for socialized housing at a flat rate of 3% every month, as opposed to the previous practice of compounding the penalties for every month of delay, leaving the residents unable to keep up with their ballooning arrears.

It turns out, the compounded penalties had no basis in any law or ordinance.

The yearly Pamaskong Handog or Christmas gift packs has become something of a gauge through which Pasig residents measure the competence of their city government.

Sotto sorted out kinks in the system, starting with cleaning up the list of senior citizens eligible for the P3,000 Christmas cash gift to make sure they won’t have to queue up for hours in December as clerks scour the list for their names.

During his State of the City Address, Sotto announced that all households in Pasig would receive a Pamaskong Handog, to eliminate the practice of some local officials who hoard the gifts and selectively distribute them.

Every gift pack will be delivered straight to every door, Sotto added, so people wouldn’t have to line up at barangay centers waiting for officials to shake their hands or deliver speeches.

Meanwhile, Pasig’s 30 barangays will receive an additional P3 million to P5 million each to augment their funds, adding up to a total of P154 million in “Aid to the Barangays.”

Some 11,200 poor children entrusted to day care centers and 7,100 malnourished schoolchildren will receive weekly food rations for themselves and their families.

One of Sotto’s first orders as mayor was a massive inventory of the city government’s assets and supplies after the Commission on Audit flagged P1.4 billion in missing inventories from the previous administration of Bobby Eusebio.

The grueling hunt for missing items and the requisite halt on new procurements became a setback in the early days of his administration, Sotto admitted. During his public address on his 100th day, he said they had been able to account for P400 million of the missing inventories.

To help catch corrupt bureaucrats and to encourage citizens to report them, Sotto opened the Ugnayan sa Pasig (Touchpoint in Pasig) complaints desk and hotline on his 3rd week in office.

Ugnayan has since received hundreds of complaints and reports about fixers and laggard bureaucrats, as well as inefficiencies in government services.

Investigations are underway in a number of cases, and Sotto said those found guilty will be dealt with the “full force of the law.”

But Sotto acknowledged that many city hall workers are shortchanged, too, which explains why an undetermined number of them resort to indiscretions to make ends meet, or feel entitled to take it out on residents trying to avail themselves of government services.

The mayor announced that 191 workers on “job order” or short-term service contracts had been promoted to casual employees – still contractual but with a degree of security. Meanwhile, the city government will open 379 permanent job positions to give casual employees security of tenure.

Among city government workers who have started to benefit from the scheme are traffic enforcers. Sotto said 649 of them had undergone a training program to “professionalize” them and give them a new mindset. Those who shape up may become permanent employees within a year. Those who continue fleecing motorists will be fired and punished.

To keep them – and motorists – in line, the city government provided 190 body cameras to keep an eye on their actions while on duty. An additional 83 enforcers were hired to help sort out the city’s colossal traffic jams.

All city government workers will be receiving their pay through cash cards in order to eliminate the pilferage of funds meant for salaries.

With the reforms in the city’s bureaucracy, Sotto claimed that Pasig now has zero ghost employees.

To help citizens participate in running the city government, Sotto said they had accredited around 200 civil society organizations, and officially recognized some 340 others. These groups will be consulted regularly on policy issues.

While other city executives make it a point to be out and about for much of the day so that people could see them working, Sotto makes sure to spend just as much time in his office doing “actual work.”

It’s 50-50, he says. It’s about creating an efficient and effective bureaucratic system. A mayor who has to micromanage a city’s problems might not be doing such a great job.

So he might not be on livestream all day, but for Sotto it’s the numbers that should do the talking.