Nov 26, 2019 5:58 PM PHT
Glenda Marie Castro
Facebook Twitter Copy URL
Copied
How did we fare as host country in the past editions of the Southeast Asian Games? 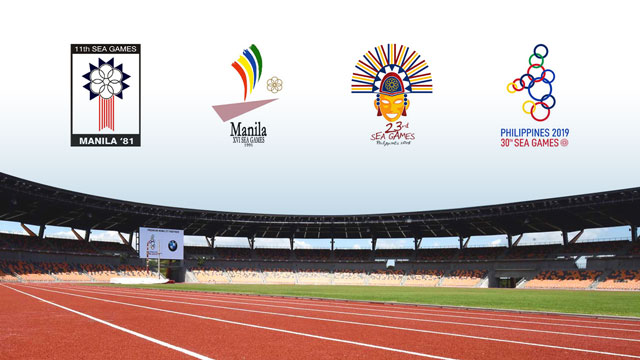 MANILA, Philippines – The Philippines is hosting the 30th Southeast Asian (SEA) Games from November 30 to December 11 – the fourth time for the biennial event to be held in the country since it joined the regional sports event in 1977.  (READ: Bloated SEA Games budget and other exposés)

It will be the fourth time for the Philippines to host the event. The first was in 1981 – four years after it joined the SEA Games, then called the Southeast Asian Peninsular Games. It also hosted the games in 1991 and 2005.

Brunei was supposed to host the games this year but it declined, citing several concerns. The Philippines agreed to step in.

The 30th edition features 56 sports and 530 events in 44 venues across the country. There are 1,115 athletes to represent the country to compete for 530 gold medals.

In preparation for the Games, the government took pride in the completion of the world-class New Clark City stadium to host the main events. The country looks to make a mark in this year’s tournament by staging the opening ceremony indoors for the first time at the Philippine Arena. The P50-million cauldron, designed by the late National Artist for Architecture Francisco Mañosa, will be lit in New Clark City. The flaming torch to be lit is designed by sculptor Daniel dela Cruz.

However, many challenges hound the 2019 Games. Issues on food, transportation, and accommodations of foreign and local athletes have emerged. Some of the venues, such as the Rizal Memorial Stadium, have yet to be finished just days before the official opening of the games. (READ: LOOK: SEA Games 2019 mishaps likened to failed Fyre Festival)

Ahead of the event, the design of the logo and its mascot counterpart “Pami” were ridiculed.

The Philippine SEA Games Organizing Committee (Phisgoc), chaired by Speaker Alan Cayetano, is on top of the country’s SEA Games hosting. The POC and Philippine Sports Committee are tasked to coordinate with Phisgoc.

How did we fare as a host country in the past editions of the SEA Games?

The opening ceremony of the 11th SEA Games was held at the Rizal Memorial Track Stadium. Back then, it was Benjamin Silva-Netto, the first Filipino to join the Olympic marathon, who lit the cauldron.

At least 2,000 athletes from 7 countries competed in 18 different sports.

The Philippines’ medal standing improved to 3rd place in 1981 with 55 gold medals from 4th place in 1979 when it won 24 gold medals. Indonesia topped the 1981 games, followed by Thailand.

The Philippines got most of its gold medals from bowling, athletics, and cycling – receiving 8 medals for each sport. Legendary bowlers Bong Coo, Paeng Nepomuceno, heptathlon queen Elma Muros, and Asia’s fastest woman Lydia de Vega were among the Filipino athletes who dominated the first Game that the country hosted. (READ: FAST FACTS: Philippines in the SEA Games)

The country gained most of its gold medals – 10 each – from shooting, swimming, and wushu. Swimmer Eric Buhain was the Best Male Athlete of the SEA Games after he pocketed 6 gold medals. Aside from Buhain, Akiko Thomson got gold medals for the 100-meter and 200-meter backstroke. Thomson was adjudged the best female athlete in the 1989 SEA Games hosted by Malaysia.

However, no gold medal was earned for 7 sports including badminton, sepak takraw, and squash.

The 23rd edition featured 40 sports and 393 events in venues spread across 7 provinces in the country. For the first time, the Philippines held the opening and closing rites in the open field of Quirino Grandstand in Manila. In effect, a large audience of approximately 200,000 delegates were accommodated.

In what turned out to be a remarkable run, the Philippines asserted its supremacy in the region by beating 10 other countries. The country harvested 291 medals (113 golds, 84 silvers, 94 bronzes), while Thailand secured 2nd spot, and Vietnam finished 3rd.

Out of the 40 sports, wushu produced the most gold medals with 11 followed by athletics and aquatics with 9 each. (READ: How PH fared in last 5 SEA Games)

Among the gold medalists were Willing Wang for wushu; Jimar Aing for the 400-meter sprint; Miguel Molina for swimming; Gretchen Malalad for karate; and Marie Antoinette “Toni” Rivero for taekwondo.

There were some minor setbacks noted by journalists who covered the games that year, including incidents in Bacolod City where athletes were shuttled by dilapidated jeepneys, and the poor quality of media IDs. There was also a sudden power interruption during a preliminary football match between Thailand and Malaysia in the same city, though power was restored after a 15-minute break in the game.

In its assessment of the Philippine hosting of the 2005 SEA Games, the Olympic Council of Asia cited “logistical hurdles” owing to the decision to hold the other events in 10 cities outside Metro Manila, where a majority of the events took place.

The Philippine SEA Games Organizing Committee (Philsoc) was the organizing committee for 2005. The chairman then was former Bulacan governor Roberto Pagdanganan.

Since winning the overall championship in 2005, however, the country backslid and garnered less gold medals in the succeeding editions of the biennial regional meet. – Rappler.com