MANILA, Philippines – It wasn’t a great a year to be in the opposition in 2019.

The government of President Rodrigo Duterte and his allies went on the offensive against their critics, a year-long assault that sent opposition figures to court and even landed some of them in jail.

From their tough loss in the midterm national elections to the raids of progressive groups’ offices, here are 6 key blows suffered by the opposition in 2019:

Opposition senatorial bets fail to get in Magic 12

Not a single opposition senatorial candidate from either the Liberal Party (LP)-led Otso Diretso slate or the Labor Win coalition managed to win a Senate seat in the May polls. (READ: Opposition bets fail to get in Magic 12)

It’s not surprising. A majority of the opposition bets suffered from little to no campaign funds, low awareness from voters, and few politicians and businessmen willing to endorse them publicly.

Their consistent attendance in senatorial debates – where the candidates articulated their advocacy-based platforms – was simply no match to the political machinery and popularity of the administration bets backed by the President and his daughter, Davao City Mayor Sara Duterte.

Neri Colmenares got the highest number of votes among all the Labor Win candidates, but landed only at 24th place. (READ: [OPINION] The labor vote is weak) 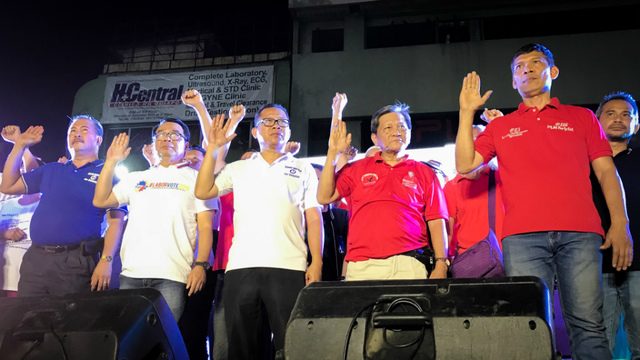 The last time the opposition failed to win even a single seat in the legislative election was 80 years ago in 1938 during the term of then-president Manuel L. Quezon.

But Vice President Leni Robredo and other LP officials did not accept their resignation. (READ: Pangilinan, Belmonte stay on as LP leaders) Thirty-six opposition figures, the highest official among them the Vice President, are now facing an inciting to sedition complaint filed by the Philippine National Police Criminal Investigation and Detection Group (CIDG) on July 18.

The allegations were based on the affidavit of the flip-flopping Peter Joemel Advincula who, in a series of videos that circulated online, initially accused Duterte, his son and Davao City 1st District Representative Paolo Duterte, Senator Bong Go, and others of having links to the illegal drug trade.

Advincula, alias Bikoy, would later turn the tables on the opposition and tag them in a supposed destabilization plot against the Duterte administration. (READ: Bikoy vs Bikoy The biggest flip-flops of the government’s star witness)

Robredo has repeatedly denied any plans to unseat Duterte, saying the once-ruling LP does not have the money nor the machinery to stage an ouster. The Vice President said they also have nothing to do with Advincula.

The Department of Justice formed a panel to conduct a preliminary probe into the sedition complaint on August 9 and submitted the case for resolution on September 13. De Lima’s supporters and international human rights organizations have remained relentless in calling for her release and insisting on her innocence. The Free Leila Committee was launched on August 26, along with a lecture series by the group #EveryWomanPH.

Despite her detention, De Lima continues to be a fierce critic of Duterte’s abusive policies, especially his bloody war on drugs that has so far killed thousands. The President, however, still insists the drug charges against De Lima are true. (READ: Premeditated murder: The character assassination of Leila de Lima)

For the 1st time, the House Speaker gets higher ratings than VP Robredo The Vice President’s trust and approval ratings have always been higher than the House Speaker under the Duterte administration – that is, until Alan Peter Cayetano came along.

The past surveys done by the polling firm during the Duterte administration showed the Speaker – first, Pantaleon Alvarez, then Gloria Macapagal Arroyo – had always been less popular than the Vice President.

Robredo, however, has also been the subject of relentless attacks from the Duterte, his allies, and their social media machinery since 2016. “How many times do I have to win for you to accept defeat?” were Robredo’s words to her poll fraud accuser Ferdinand “Bongbong” Marcos Jr when the initial vote recount results in her election case showed she gained 15,093 more votes over him.

Yet the Supreme Court, acting as the Presidential Electoral Tribunal (PET), still did not junk the vice presidential electoral protest.

Instead, the justices asked both parties to comment on the ballot recount report and on Marcos’ 3rd cause of action to have the results in 3 other provinces – Lanao del Sur, Basilan, and Maguindanao – nullified.

While Robredo still considers the PET ruling a win for her, she also said “there is no other acceptable decision but to dismiss” the protest based on Rule 65 of the PET.

Rule 65 says that if there is no substantial recovery of votes in favor of the late dictator Ferdinand Marcos’ son in the 3 pilot provinces, “the protest may forthwith be dismissed, without further consideration of the other provinces mentioned in the protest.”

Former Commission on Elections chief Sixto Brillantes Jr, one of the country’s foremost election lawyers, said the PET ruling was “abnormal” and would only prolong the case.

Unsurprisingly, Marcos still thinks the PET ruling was a “good result” for him as the tribunal will now “deal” with his contested votes in the 3 Mindanao provinces. The Duterte government ramped up its attack on progressive groups in the second half of 2019.

Fifty-eight activists were arrested on October 31, a day after Quezon City Regional Trial Court Executive Judge Cecilyn Burgos Villavert issued the warrants to allow police to conduct searches on the offices of progressive groups in Bacolod and for the house of Kadamay members in Manila.

Authorities arrested 56 activists in Bacolod, as well as Kadamay members Cora Agovida and Michael Tan Bartolome in Manila, after firearms and explosives were recovered in their offices.

Less than a week later on November 5, the Armed Forces of the Philippines and the Department of National Defense red-tagged 18 organizations, including the Gabriela Women’s Party during a hearing in the House of Representatives, where Arlene Brosas is congresswoman for the left-leaning party-list group. (READ: Red-tagged Oxfam, NCCP slam military for ‘malicious, careless’ attack)

On the same day, the Manila police also arrested 3 members of progressive groups during a raid in Tondo past midnight.

The Left also suffered loses in court. Karapatan and the National Union of Peoples’ Lawyers lost their respective petitions for amparo asking the Court of Appeals to issue a protection order against alleged military harassment.

The appellate court likewise denied the petition for writ of habeas corpus filed by the family of youth activist Alexandrea Pacalda, whom soldiers arrested without warrant on September 14. The military reportedly forced Pacalda to sign an affidavit of voluntary surrender.

Only 64 out of the 300 lawmakers in the Duterte-controlled House of Representatives signed the petition demanding an end to the crackdown on the progressives.

In the 3 years since Duterte rose to power, more than 2,000 human rights workers have faced cases, outnumbering those in the 9-year presidency of Arroyo.

Conservatively, more than 6,000 people have been killed in police anti-drug operations under the war on drugs, the centerpiece of Duterte’s government.

But human rights groups estimate the numbers could reach almost 27,000 to include victims of vigilante-style killings. – Rappler.com