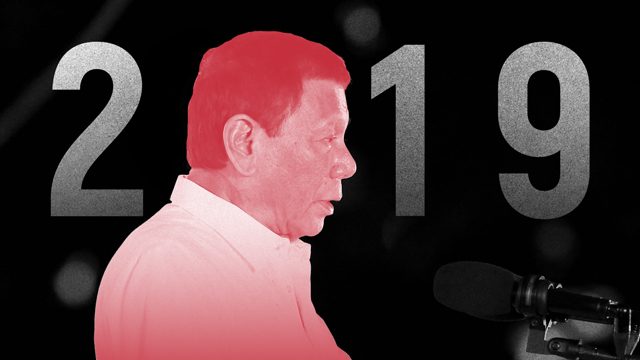 Facebook Twitter Copy URL
Copied
How did Duterte fare in 2019? Here's how he handled major controversies – from a murder-rapist's early release to the critical midterm elections.

MANILA, Philippines – The year 2019 was a mixed one for President Rodrigo Duterte.

He marked the midway point of his presidency with his highest-ever satisfaction ratings. His allies swept the senatorial elections, cementing his hold on the legislative branch and proving he’s no lameduck president yet. The year started on a positive note too, with the inauguration of the Bangsamoro region, a major campaign promise of Mindanao’s most famous politician.

Like any other year, 2019 was full of controversies that risked Duterte’s popularity at every turn. But the challenges were felt more sharply this year because Duterte is perpetually aware of the ticking clock hanging over a presidency in its sunset years. No wonder that in 2019, Duterte publicly gave up on his federalism promise and his vow to solve Metro Manila traffic.

Time is against Duterte in another way. His health became a bigger issue in 2019. His tight-lipped approach to this public concern will ensure it continues to cast a shadow on his remaining years in power.

Let’s go through the controversies one by one.

The President who portrayed himself as for the common people rejected laws that were seen by many as providing relief to exploited sectors of society – coconut farmers robbed by the Marcos dictatorship and the hundreds of thousands of workers at the mercy of an abusive end-of-contract scheme.

Malacañang explained his veto of the coconut farmers trust fund bill with claims that its provisions could be easily abused, but supporters of the bill said the issue could have been fixed early on if Malacañang had only relayed Duterte’s concern.

His veto of the anti-endo bill came as an even bigger shock, since Duterte had called for its immediate passage several times. Together, the two vetoes were a stunning reversal of two big Duterte campaign promises.

Duterte rails against the opposition, media, and other critics every year (every speech, in fact), but 2019 saw him make serious blanket allegations – an act driven by the heated midterm elections.

After videos of a hooded man claiming drug links of Duterte’s family members and his aide Bong Go circulated online, the President responded by releasing “matrices” supposedly showing how the Liberal Party, Magdalo Party, journalists, and a lawyers’ group were plotting to oust him and ruin his choice candidates’ chance of winning the polls.

Critics ridiculed the alleged “intelligence” document, pointing out a number of inaccuracies and outdated information. But Duterte’s supporters lapped it up. (LISTEN: PODCAST: Duterte’s diagrams and his war vs critical media)

May 13, 2019 ended with a staggering victory for Duterte – none from the opposition won a Senate seat. With that stunning upset, Duterte counts almost half of the current Senate as his allies – meaning they are either personally loyal to him or owe some political debt to him because he campaigned for them.

Of the winning senators, two are Duterte’s most trusted men – his longtime assistant Bong Go and his first police chief Ronald dela Rosa. Both are election neophytes. It was a win for Duterte but a loss for democracy. Critics now worry about the independence of the Senate in the last critical years of a presidency that has shown authoritarian colors.

The international community’s judgment of Duterte’s drug war once again reared its ugly head in 2019 in the form of a UN Human Rights Council (UNHRC) resolution proposed by Iceland.

The most critical portion of the resolution orders UN human rights chief Michele Bachelet to draw up a report on human rights violations committed under the drug campaign.

Duterte’s response was to make fun of Iceland and then order the cessation of the government’s negotiations for loans and grants with any of the countries that supported the resolution.

Malacañang says it’s the government’s way of fighting an “affront” to Philippine sovereignty. Critics point out it’s yet another instance of Duterte’s ego getting in the way of much-needed international assistance.

The UNCHR decision and the International Criminal Court’s preliminary examination weigh on Duterte.

Amped up attacks against the Left

The year 2019 saw an escalation in government’s retaliation against, not just members of the Communist Party of the Philippines (CPP) and its armed wing New People’s Army, but of progressive organizations Duterte calls “legal fronts” of the CPP. While the CPP and NPA have been declared terrorists by other nations, progressive organizations are legal and have even won seats in the legislative branch.

Duterte implemented his controversial Executive Order No. 70 this year. He ordered more deployment of troops in NPA hot spots Negros island and Bicol region, even saying he would use his “emergency powers” there after a series of killings.

His man in the Senate, Ronald dela Rosa, pushed for police patrols in state universities, claiming they were Left recruitment grounds.

Upon the suggestion of National Security Adviser Hermogenes Esperon Jr, he assigned Cabinet members to lead peace and order efforts in each region, with emphasis on countering the communist insurgency there.

He sent a delegation to Europe to ask governments and financial institutions there not to fund organizations the government accuses of being communist money cows.

But on the last month of 2019, Duterte opened a door to the Left – sending labor chief Silvestre Bello III to speak with CPP founder Joma Sison in the Netherlands. Was the year of pressure and attacks meant to drive the communists to a concession? A controversy out of left-field would end up unearthing conflict of interest issues in Malacañang and become the downfall of a Duterte disciple.

The public flew into a rage when media reported on the impending release of former mayor Antonio Sanchez, convicted murderer and rapist of a college girl and her friend in the ‘90s. This was all due to a law signed in the previous administration that shortened jail time of certain convicts. Officials in the Duterte administration interpreted the law as covering heinous crime convicts like Sanchez.

Duterte, ever sensitive to the public pulse, eventually capitulated by firing Nicanor Faeldon, whose initial actions started the process for Sanchez’s release.

He also ordered the rearrest of heinous crime convicts, “dead or alive,” which prompted a massive hunt and surrenders by fearful ex-convicts. Thousands would be kept in jail despite the absence of any legal basis. Four of them even died. (READ: Bilibid returnees die in Duterte administration blunders)

The Sanchez controversy was capable of punching a hole into Duterte’s image as a hardliner against murderers and rapists and he had to respond proportionately.

But unlike Faeldon, no such sacking was meted against Presidential Spokesman Salvador Panelo when it was revealed that he issued a powerful referral letter about Sanchez’s bid for clemency to the Bureau of Pardon and Parole, a move that stank of conflict of interest. Panelo had been Sanchez’s lawyer during his murder trial.

The 74-year-old President’s own Cabinet members had suggested in July that Duterte take a vacation because he looked tired. True enough, 2019 was the year when Duterte skipped the most number of events and took the most number of week-long breaks from public events.

Based on Rappler’s ongoing tally, Duterte was absent from 10 official engagements this year. That’s more than thrice the number of skipped events in 2018 (3). In 2017, he was absent from only one event while in 2016, he missed 6 activities.

The biggest 2019 headline on Duterte’s health was his having to cut short a trip to Japan because of “unbearable pain” in his lower back and hips. The pain, according to Malacañang, was due to the President’s motorcycle accident that had grabbed headlines the week before.

Duterte saw a doctor after experiencing pain but the Palace is yet to issue a medical bulletin on the results, saying only that he took medication for “muscle spasms.” (READ: President’s health: Touchy topic for Duterte, public concern for Constitution)

2019 was also the year Duterte claimed he was having blood tests “almost every other day” and that he has myasthenia gravis, a rare autoimmune neuromuscular disease that causes one of his eyelids to droop. On December 12, he said his Barrett’s Esophagus was going from “bad to worse.” (READ: LIST: ‘Migraine every day’ and Duterte’s other ailments)

Towards the end of the year, the Palace announced Duterte was going on a leave and had even tapped Executive Secretary Salvador Medialdea as government caretaker, something he never did when taking breaks from public events. But after speculation on his health, Duterte clarified there was no need to appoint a caretaker.

Duterte’s China policy continues to be a major issue in the Duterte presidency. But 2019 saw an escalation.

A few days before Philippine Independence Day, a Chinese vessel hit a Filipino fishing boat called Gem-Ver in Philippine waters. Outrage erupted over what appeared to be another bullying tactic by China. Days later, it was the Duterte government’s response that had critics fuming. Duterte took over a week to publicly address the issue, and in a manner that left many disappointed as it downplayed the Filipino fishermen’s plight.

As this saga was unfolding, his government was also busy crafting an agreement that would allow China to join exploration expeditions for precious oil and gas resources in the West Philippine Sea, the same body of water the Asian giant is illegally claiming as its own. In 2019, the Philippine and Chinese governments finalized terms of reference for the deal and assigned specific officials to thresh out the final details.

The Gem-Ver collision did nothing to dent Duterte’s popularity rating. In fact, he achieved his highest-ever satisfaction rating from Social Weather Stations right after. Meanwhile, Filipinos’ trust in China sank.

The year 2019 began with dry faucets in different parts of Metro Manila and Rizal, prompting outrage that shook Malacañang’s doors. A frustrated Duterte, hearing from a “friend” that the shortage could be “artificial,” unleashed his wrath on the two companies in charge of water services – Manila Water and Maynilad Services Inc, run by two of the country’s richest businessmen, Fernando Zobel de Ayala and Manny Pangilinan.

The year was almost over when Duterte got reminded of his beef with the two companies by a court order demanding his government pay Manila Water P7.4 billion for an increase in water rates the government refused to implement.

Duterte cried foul, pointing out provisions in the firm’s deal with government that harmed public interest. After Duterte’s threats of scrapping these deals and constant angry public rants, the two firms capitulated, agreeing not to charge the government for cases they won in court and suspending a round of water rate hikes. Despite that, the government still canceled the extension of their agreements. The firms’ stocks fell sharply too. – Rappler.com