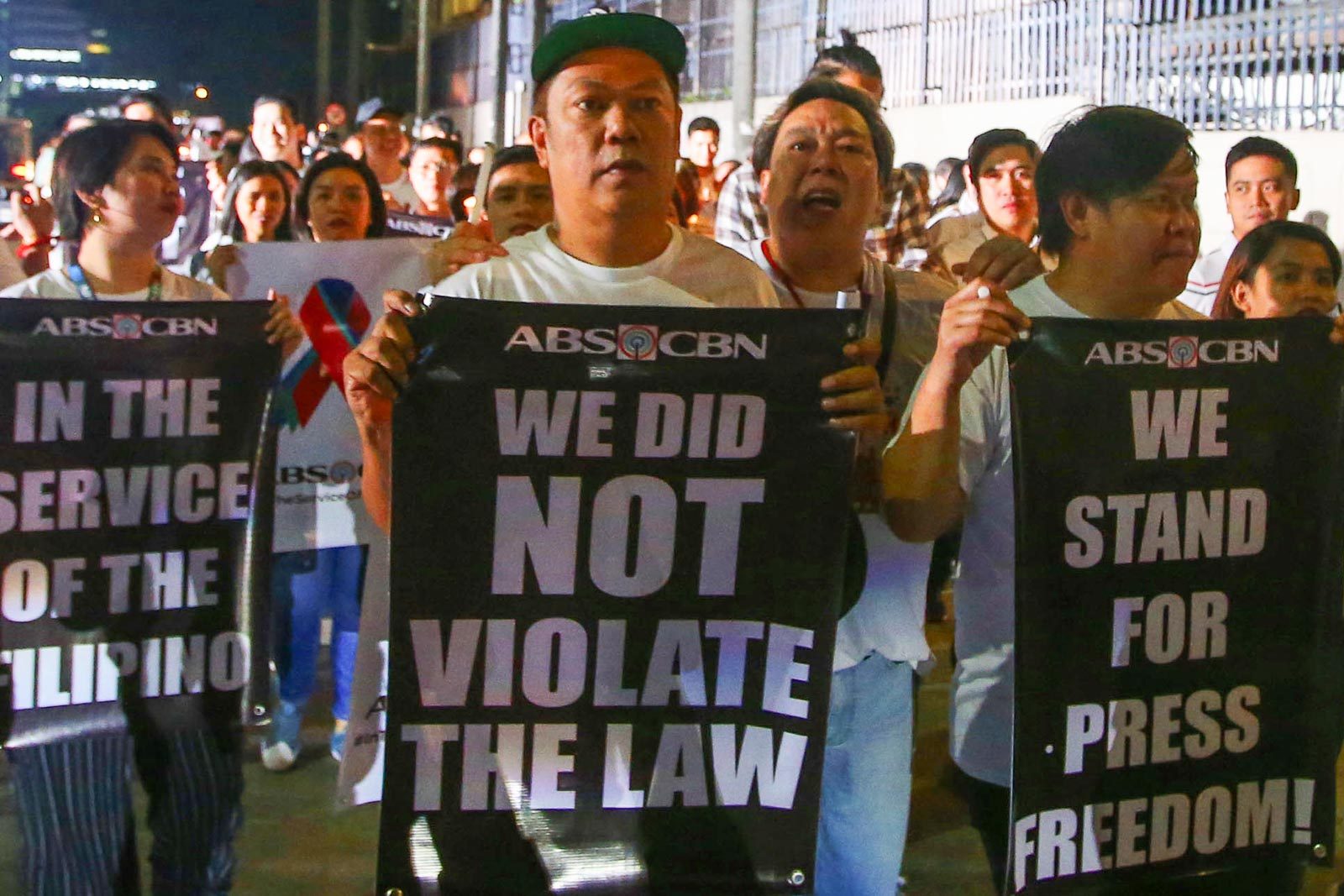 MANILA, Philippines – “We did not violate the law,” was ABS-CBN’s blanket defense when Solicitor General Jose Calida filed a quo warranto case against the network seeking to take away its franchise.

In a 58-page comment submitted to the Supreme Court on Monday, February 24, ABS-CBN answered the accusations point-by-point as it fights for its franchise on all fronts.

At the Supreme Court, ABS-CBN hopes the justices would junk the petition outright for being the wrong venue, citing hierarchy of courts. The Supreme Court is not a trier of facts, and ABS-CBN said Calida’s case deals heavily with factual issues that should be resolved by either lower courts or different administrative agencies, and not the High Tribunal.

Take a look at ABS-CBN’s answers to all of Calida’s accusations:

ACCUSATION #1: Kapamilya Box Office (KBO) is illegal because ABS-CBN offered it as a pay-per-view product without the proper permits from the National Telecommunications Commission (NTC), therefore a violation of its franchise.

ANSWER: It was ABS-CBN Convergence that offered KBO as a value-added-service. Convergence, the comment said, “sought and obtained NTC approvals.”

KBO is a pay-per-view movie channel that subscribers pay for every week on top of a one-time fee to buy the ABS-CBN TV Plus Digital Box.

ACCUSATION #2: The NTC ordered ABS-CBN in 2019 to refrain from offering pay-per-view services.

Calida said in his petition that the NTC told ABS-CBN on April 29, 2015, to “refrain from offering any pay television service…until such time that the Commission has come up with appropriate guidelines for the same.”

ANSWER: The NTC actually “approved” its pay-per-view service in the said 2019 order, but imposed a condition that its service “shall be subject to such Conditional Access guidelines that the Commission or any other relevant government agency may hereafter issue.”

In the comment, ABS-CBN said that the NTC order did not prohibit pay-per-view before the issuance of a guideline, only that it required companies to comply with guidelines if, and when, the government comes up with one.

“Even assuming that there was a violation….the potential penalty would only be a fine not exceeding two hundred pesos per day for every day during which such default or violation continues,” said the comment, citing the Public Service Law.

At the Senate, NTC Commissioner Gamaliel Cordoba said that the violation involved was ABS-CBN proceeding with a pay-per-view service even without guidelines.

Senator Ralph Recto said that if there was a violation, penalties should just be imposed on ABS-CBN instead of it being shut down. “I don’t think that this warrants a death penalty or a capital punishment na papatayin natin ‘yung kumpanya (that we will kill the company),” said Recto.

ACCUSATION #3: Pay-per-view is in itself illegal because franchise holders are not allowed to derive income other than from its paid advertisements.

ANSWER: ABS-CBN cited Justice Secretary Menardo Guevarra’s legal opinion issued to NTC upon request in 2018, saying that “we find it clear enough that broadcast companies can engage in Conditional Access (CA) or Conditional Access System (CAS) and, for the same reason, can offer TV pay-per-view services.”

“There is nothing in said provisions that would give any impression that ‘commercial purposes’ are limited only to income derived by TV broadcast companies from paid advertisements,” the legal opinion added, as cited by ABS-CBN’s comment.

ABS-CBN said in its comment that if franchise grantees were to be disallowed from offering pay-per-view, they would be at a disadvantage because the likes of Netflix are charging a fee for their content.

ACCUSATION #4: ABS-CBN skirted franchise rules when it acquired and merged with two companies which had their own franchises, and used those franchises as their own.

Calida said ABS-CBN resorted to corporate layering to avoid the tedious process of applying for a franchise when it aired its content using the franchises of Multi-Media Telephony Inc and Amcara, which ABS-CBN eventually bought.

ANSWER: ABS-CBN said that the Supreme Court made a clear distinction between a sale of a franchise and sale of shares of stock of a corporation possessing such franchise.

“The former is prohibited while the latter is not,” the comment said.

ABS-CBN cited the case PLDT vs NTC (G.R No. 8404), which said: “In other words, even if the original stockholders had transferred their shares to another group of shareholders, the franchise granted to the corporation subsists as long as the corporation, as an entity, continues to exist. The franchise is not thereby invalidated by the transfer of the shares.”

What ABS-CBN is simply saying is that while transfer of franchise through sale is prohibited, it was not barred from buying shares of stock of a franchise grantee.

Accusation #5: ABS-CBN violated the franchise law of Multi-Media Telephony because Section 15 of such law said “the grantee shall not lease, transfer, grant, the usufruct of, sell nor assign this franchise or the rights and privileges acquired thereunder to any person, firm, company, corporation or other commercial or legal entity, nor merge with any corporation or entity, nor shall the controlling interest in the grantee be transferred…”

Section 23 of RA 7925 says “any advantage, favor, privilege, exemption or immunity granted under existing franchises, or may hereafter be granted, shall ipso facto become part of previously granted telecommunication franchises and shall be accorded immediately and unconditionally to the grantees of such franchises.”

On March 30, 1995, Congress granted a company called Maranao Telephone Company a franchise and prohibited it from selling but only within 5 years. ABS-CBN said that because of Section 23 of RA 7925, the advantage given to Maranao must also be given to Multi-Media Telephony.

“Such requirement must be deemed to apply only for a period of 5 years from the effectivity of Multi-Media Telephony’s franchise (March 17, 1995), or only until March 17, 2000,” their comment said.

ABS-CBN bought into Multi-Media Telephony in 2015.

Accusation #6: ABS-CBN Convergence violated RA 7908, the original franchise law of Multi-Media Telephony, when it didn’t publicly offer shares. RA 7908 says that the company must offer at least 30% of its outstanding capital stock within 5 years of starting its operations, in this case within 5 years since 2015.

Answer: Convergence never qualified to publicly offer its shares. ABS-CBN said that for a company to be allowed to list its shares, it must submit proof of profitable operations, and that it must satisfy a certain financial situation.

ABS-CBN said Convergence had a “capital deficiency of over P6 billion as of the end of 2018.”

“Since Convergence cannot comply with the requirements under the Philippine Stock Exchange or PSE’s Main and SME Board Listing Rules, it cannot list and offer its shares to the public,” said ABS-CBN.

“The law does not require that the impossible be done,” said ABS-CBN.

ACCUSATION #7: ABS-CBN’s issuance of Philippine Depositary Receipts (PDR) to foreign investors is illegal because it effectively cedes control to a foreign entity when the Constitution requires that media companies be 100% Filipino-owned and controlled.

“PDR holders’ rights are not equivalent to the full beneficial ownership rights of the shareholders of ABS-CBN,” said the network, listing down all the rights of a shareholder vis-a-vis the very limited benefits of a PDR holder.

For example, a shareholder has the right to vote on certain matters but a PDR holder does not.

The Supreme Court will meet en banc Wednesday, February 26, and is expected to tackle by then the ABS-CBN quo warranto case. – Rappler.com