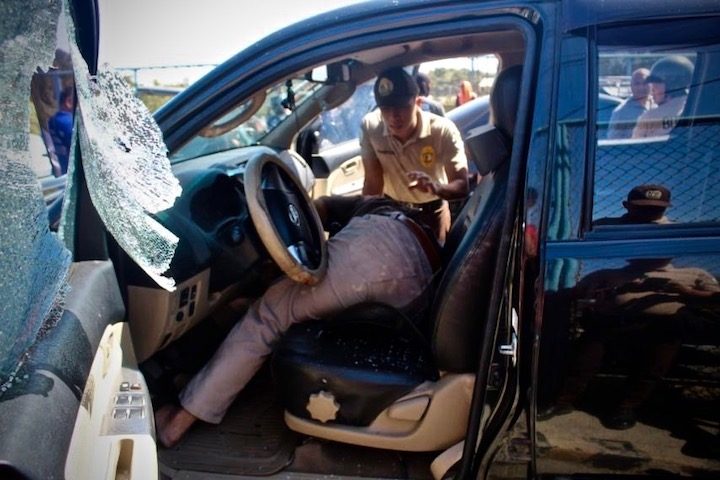 MANILA, Philippines (UPDATED) – In government service, one of the most dangerous jobs to work in is ironically what is supposed to be the most secure government facility: the New Bilibid Prison.

While the facility is heavily fortified, its high-profile inmates are deemed dangerous, even suspected of continuously conducting the operations of illegal groups capable of killing.

The latest case claimed the life of suspended BuCor legal division chief Fredric Santos, who was shot dead in front of his daughter’s school on February 19. His killing is not the first.

As of March 4, a total of 10 have been killed, including retired personnel. All of them remain unsolved.

This list will be updated if more cases arise.

Flores was killed while driving by a motorcycle-riding gunman along the East Service Road near Saint Bernadette College in Cupang, Muntinlupa.

According to a driver who stood as a witness for the case, the motorcycle approached his car, a Ford Focus, and shot him in the head. The suspect fled towards Alabang, while Flores was declared dead on arrival at the Muntinlupa City Hospital.

The police still have not identified Flores’ killer.

Quinto was the Superintendent of Security and Operations of the Davao Penal Colony.

He was killed just outside his house in Panabo City, Davao del Norte, right after parking his car and getting settled at home.

According to a witness, the killer rode an SUV to approach him and shot him on the chest.

Plasabas was a prison guard of the Davao Penal Colony who was shot dead “a few kilometers” from his home in Barangay Ising, Carmen, Davao del Norte while he was riding his motorcycle.

According to the BuCor, he was “tailed” by suspects also aboard a motorcycle. When they reached him, they fired at him. Plasabas lost control of his bike and crashed on the sidewalk, where he was shot in the head by the assailants.

Plasabas was declared dead on arrival at the Carmen District Hospital, according to Brigada News Davao.

Makilala was a security officer at the Davao Penal Colony. He was killed in the morning of February 4, 2017, while he was riding a bus traversing Carmen, Davao del Norte.

A gunman, accompanied by someone, stopped the bus after catching up with it using a motorcycle. He boarded the bus and walked up to Makilala and shot him in the head and fled.

As he was escaping, the killer ran to a cop who lived near the area. The killer’s accomplice shot the cop in the leg, after which Makilala’s gunman stole another motorcycle. Both of them fled in the direction of Santo Tomas, Davao del Norte.

In 2012, Makilala exposed alleged prostitution and corruption inside the New Bilibid Prison, prompting the Department of Justice to launch a probe into the issue. Authorities believe that his killing had something to do with his being a whistleblower.

Reyes, assigned at the BuCor reservation’s security service, was killed at around 4 pm on September 2, 2018 after dropping off his niece on his motorcycle.

On his way home inside the BuCor reservation, he was shot multiple times from the back by a motorcycle-riding gunman along Ina ng Awa Street, beside the reservation’s Sunken Garden. He was declared dead on the spot.

The police still have not identified Reyes’ killer.

San Gabriel was killed just a month after Romel Reyes along the corner of Arellano and Cagiao Streets in Katarungan Village 1 in Poblacion, Muntinlupa.

It was around 30 minutes past midnight and San Gabriel was on his way home aboard a motorcycle when he was shot multiple times by a “male suspect” at the intersection. He was declared dead at the Medical Center of Muntinlupa at around 2 am the same day.

The police still have not identified San Gabriel’s killer.

Padilla was killed right in front of the Barangay Poblacion Public Market at around 2:55 pm.

Padilla was aboard his Nissan Sentra, passing through the market, when two unidentified suspects aboard a motorcycle came from behind and shot him successively. At least one bullet hit his head.

As suspects fled the scene, he was rushed to the Medical Center of Muntinlupa, where he was pronounced dead at around 8:16 pm.

The police have not identified Padilla’s killers.

Traya was killed outside his home at around 1:40 pm right after he alighted from his Toyota Hi-Ace along Amparo Street in Barangay Poblacion.

Just as he was about to open the gate of his rented parking lot, an unidentified gunman shot him in the head, causing his instantaneous death.

The killer fled to an unknown direction and remains unidentified by the police.

After his death, Traya was accused by the wife of a Bilibid inmate of being involved in the Good Conduct Time Allowance for sale scheme during a Senate hearing in September 2019.

Bergula was killed at around 10:30 am as he was buying dried fish (tuyo) from a Variety Store in the New Poblacion Market. He was shot point-blank in the left chest by an unidentified suspect.

The suspect and an unidentified cohort fled using a motorcycle, while Bergula was rushed to the Medical Center of Muntinlupa. He was declared dead at around 11:02 am on the same day.

Santos was about to fetch his daughter in Grade 6 when he was shot dead outside her school at around 1:50 pm. Two unidentified suspects shot him at point-blank range and fled to an unknown direction, while Santos was declared dead on the spot by the responding rescue team.

He sustained gusnhot wounds in the head and investigators later found 6 fired cartridges in the crime scene.

He made the news as legal division chief of BuCor, suspended by the Office of the Ombudsman and once detained by the Senate in September 2019 over controversies in the GCTA law’s implementation.

As of February 26, cops admitted to “facing a blank wall” in the case of Santos – still failing to identify suspects and the motive behind his killing. – Rappler.com