Mar 3, 2020 8:00 AM PHT
Michelle Abad
Facebook Twitter Copy URL
Copied
(UPDATED) The hostages have been freed and the hostage-taker has been arrested. Here’s a rundown of events of the March 2 incident at the Greenhills mall. 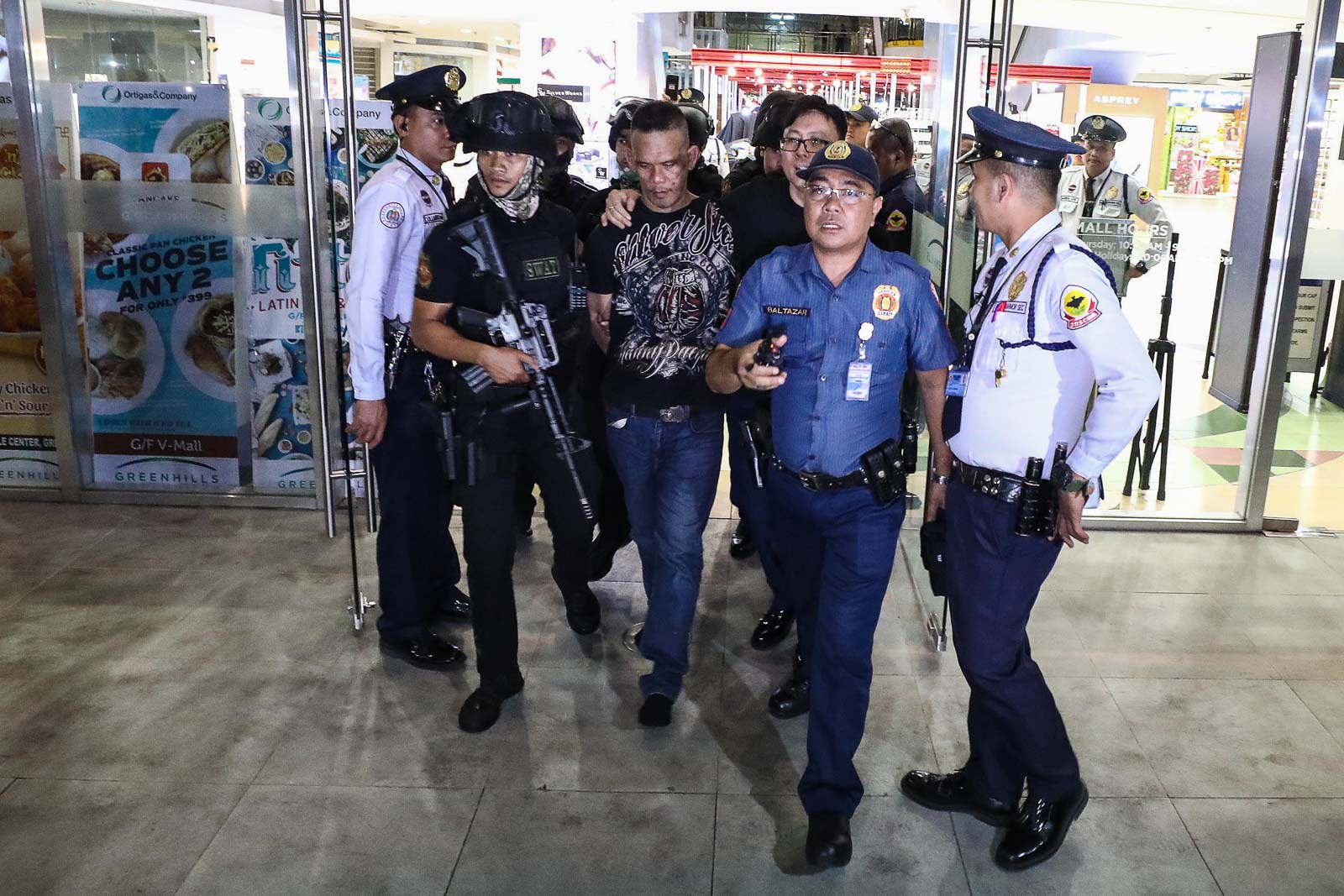 MANILA, Philippines (UPDATED) – A security guard who was fired from his job held dozens of people hostage at a mall in Greenhills, San Juan on Monday, March 2.

The former guard, 40-year-old Alchie Paray, was fired from Safeguard Armor Security Corporation (SASCOR) after being absent without leave for weeks.

The hostages were freed by Monday evening and the hostage-taker arrested.

Here’s a rundown of events related to the incident that transpired throughout the 10-hour ordeal:

Paray storms into Virra Mall (V-Mall) in San Juan City through the employees entrance. Security officer Roland Beleta asks Paray about his presence in the office, but Paray immediately shoots him with a .45 Caliber pistol.

Within minutes, Beleta is rushed to the Cardinal Santos Medical Center. Meanwhile, Paray proceeds to the finance office and takes all 55 personnel inside as hostage.

San Juan police receive a call from Greenhills management and immediately respond to verify the incident.

Paray contacts the radio operator of the mall security, demanding that all security guards gather outside the mall. If the demand is not met, Paray threatens to kill the hostages.

The police set up a command post inside the Greenhills chapel.

V-Mall is placed on lockdown over a reported shooting incident. The police do not yet publicly confirm a hostage-taking incident. Security personnel are clearing the mall.

Greenhills Center Management confirms the hostage-taking incident in a statement, and says that a guard has been injured.

Zamora says Paray wants to at least hold a “video call” with fellow guards, and then speak with reporters in person.

The mayor suspects that the gunmen went on a rampage because he was fired.

In a press conference led by the police, 4 security personnel are set to appear, following one of the demands of the hostage-taker. The 4 are Paray’s former bosses and colleagues in guarding the Greenhills mall.

The security authorities have a prepared statement they would later read.

Media is asked to move inside the Greenhills Shopping Center for the briefing. A cop sets up a video-call with Paray, showing that media has been call in, with the security agency also in attendance.

Media members also confirm their attendance to the gunman through walkie-talkie.

The hostage-taker wants all media members present to hear his conversations with the authorities.

With the intention of appeasing the hostage-taker, 6 security authorities apologize to Paray and express their intent to resign from their posts.

The bosses say they followed the demand of Paray to end the “crisis” swiftly.

As of this time, the hostages are still held inside V-Mall.

The hostage-taker wants two of his bosses to literally eat P2,500 in front of the media. His condition for his demand not to push through is for a cop to ask him, through the media, not to do it. The police comply.

The media and police wait in silence for the hostages to walk free with Paray, who has reportedly left his weapon in the hostage room.

The dozens of vendors and employees are freed after hours of being held hostage inside the mall. Paray, thought to be unarmed, walks out with the hostages.

Police clear the room where the hostages were held to recover Paray’s grenade.

The hostage-taker angrily gives a 20-minute speech about alleged unfair treatment by his former employers.

As Paray asks Mayor Zamora whether he would end up in prison or in the cemetery, around 5 cops suddenly tackle Paray. As it turns out he still has his pistol on him.

{source} <blockquote class=”twitter-tweet”><p lang=”en” dir=”ltr”>WATCH: Around 5 policemen tackle Greenhills hostage-taker Archie Paray to the ground, causing a quick panic. Before the tackle, Paray took the microphone and went on a 20-minute monologue against his bosses&#39; alleged unfair treatment of him and his fellow guards. <a href=”https://t.co/iajZPZ0pYR”>pic.twitter.com/iajZPZ0pYR</a></p>&mdash; Rappler (@rapplerdotcom) <a href=”https://twitter.com/rapplerdotcom/status/1234468300177854465?ref_src=twsrc%5Etfw”>March 2, 2020</a></blockquote> <script async src=”https://platform.twitter.com/widgets.js” charset=”utf-8″></script> {/source}

The hostage-taker is arrested and taken away by National Capital Region police.

The police recover from him a pistol, magazines with live ammo, and one tactical knife.

In a statement, the Greenhills Center Management says the hostages had been turned over to the police for debriefing and other necessary assistance.

“Management continues to cooperate with authorities and will have a post-incident assessment with the police to avoid a repeat of this unfortunate situation,” the statement says.

The Philippine National Police Supervisory Office for Security and Investigation Agencies (SOSIA) reveals that Paray is not licensed to be a guard, having no license from Crame. Police later clarify that Paray is apparently licensed after all. – Rappler.com