MANILA, Philippines – Doctors have been trying many possible cures for COVID-19, the latest being convalescent plasma therapy, a treatment that uses the antibodies of coronavirus survivors to boost the immune systems of the critically ill.

It’s one of many treatments that are given as compassionate care, that is, the use of drugs and cures that are still in the testing stages, in hopes of easing the symptoms of those who are sick.

In the Philippines, St Luke’s Medical Center (SMLC) in Bonifacio Global City (BGC) and in Quezon City have treated 7 patients with convalescent plasma as of Tuesday, April 14, while the Philippine General Hospital (PGH) has treated 3 patients as of April 15.

The two hospital groups are still calling for plasma donations from survivors to use as treatment for their infected patients. (READ: Pay it forward: Coronavirus survivors urge others who recovered to donate blood)

What exactly is convalescent plasma therapy and how might it help infected patients recover from the novel coronavirus?

Convalescent plasma therapy is a kind of passive immunization that involves giving the plasma of a recovered patient to infected patients to boost their immune system and help their bodies fight the disease.

Plasma is the part of the blood that remains when red blood cells, white blood cells, platelets, and other cellular components are removed. It contains water, salts, enzymes, antibodies, and other proteins.

Passive immunization isn’t new, but it isn’t as long-lasting as active immunity. In passive immunity, a person is given antibodies rather than leaving his own immune system to produce them.

Active immunization, on the other hand, is done through infection with a disease or vaccination. A person who has been actively immunized can produce the necessary antibodies immediately the next time he encounters a disease – this lasts a long time, sometimes for life. 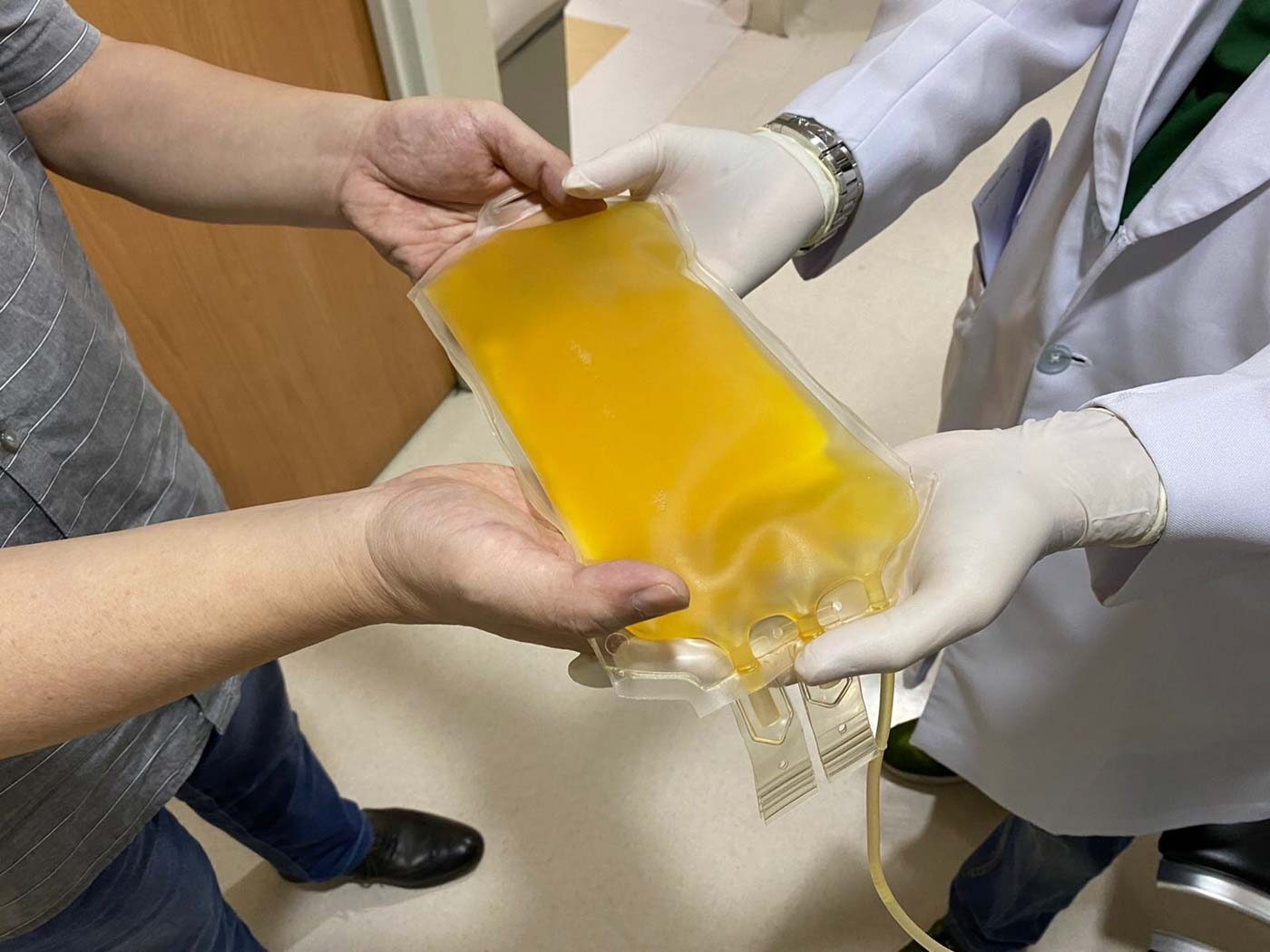 Convalescent plasma is one of the treatments for COVID-19 that’s being evaluated. There has been no treatment or vaccine for the disease announced as of Tuesday, April 14, according to the World Health Organization (WHO).

The WHO also says in their technical guidance document published on March 20, “Experience suggests that empirical use of convalescent plasma may be a potentially useful treatment for COVID-19.”

It recommended a detailed risk assessment of blood services to hospitals so they can safely collect, process, and store blood components in a way that ensures quality.

Doctors at SMLC and PGH say that their patients have responded well to convalescent plasma, but it’s too early to come to any definitive conclusions about the treatment.

“Some of them, their chest X-rays have improved, some inflammatory markers that we’ve checked have decreased in some of these patients… but we don’t want to pre-hype,” said Doctor Francisco Lopez, head of Blood and Marrow Transplant Service at St Luke’s BGC.  “We have to wait for a week or two to really see the effect [of the plasma], but that’s what we’re seeing now.”

St Luke’s BGC gave its first plasma transfusion to a COVID-19 patient on Saturday, April 11, while PGH announced that it received plasma from donors on April 10.

What happens during plasma collection, donation and transfusion? For both hospitals, possible donors can call a hotline and be guided through the screening and donation process.

At PGH, a team will visit the donor to determine his or her eligibility. Once approved, the donor will be brought to the University of the Philippines-Manila (not PGH itself) for the collection of plasma or whole blood.

There are two ways to collect plasma: through an apheresis machine, which separates blood into its various components or through whole blood collection. PGH collects plasma both ways, while SMLC collects only through apheresis.

When plasma is collected through an apheresis machine, it returns the red and white blood cells to the donor. This process yields 500 cubic centimeters or half a liter of plasma.

On the other hand, whole blood collection yields 250 mL or one-fourth liter of plasma.

The plasma is given intravenously to the recipient who has a matching blood type. This can take two to three hours.

Since convalescent plasma is considered compassionate care and not an official cure for COVID-19, patients are asked to sign a consent form and a waiver before the treatment.

Who can receive blood?

At SMLC and PGH, plasma is administered to COVID-19 patients who are critically ill or progressing to severe illness.

A potential side effect of plasma infusion would be an allergic reaction, Lopez said, though recipients are given Benadryl and Paracetamol to prevent that from happening. Receiving plasma may also be dangerous for patients who have pre-existing heart conditions.

“There are other theoretical risks such as antibody-mediated enhancement of the disease (disease enhancement in the presence of certain antibodies) and modulation of immune response (such that patients who receive CP become more vulnerable to subsequent re-infection). These remain to be theoretical as of now and scientists are still studying these,” Gauiran said.

Still, exclusions are limited, said Lopez, and the treatment can be done to almost anyone.

At St Luke’s, the patients who are given plasma have also received other compassionate care treatments and drugs for the disease that are undergoing trials, Lopez said. Convalescent plasma isn’t the first line of treatment.

Who is eligible to donate blood?

Donors for convalescent plasma therapy go through the same requirements as blood donors, but additional criteria have been added by the hospitals.

At SMLC, donors are required to have two negative swabs for COVID-19 and an antibody titer test in order to ensure that they already have antibodies in their blood.

After that, donors take tests for HIV, syphillis, hepatitis, malaria, and other diseases, which are routine tests done for blood donation.

PGH, on the other hand, says that they choose their donors based on the following criteria:

In addition, donors to PGH:

Has it been used to treat other diseases?

Convalescent plasma therapy has been used as empirical treatment a number of times in the past.

Convalescent blood products were used as early as the 1880s to treat bacterial and viral infections in humans and in animal models. Studies were also conducted during the 1918 to 1920 Spanish influenza that suggested they might be an effective therapy.

More recently, there have been studies on using them to treat Middle East respiratory syndrome (MERS-CoV) and Severe Acute Respiratory Syndrome (SARS).

The WHO’s detailed guidance on blood transfusion was published in 2014, when convalescent whole blood or plasma therapy was being used as an empirical treatment for ebola.

Who is using it as treatment for COVID-19?

Aside from the Philippines, other countries have been using convalescent plasma to treat COVID-19.

Small studies involving 10 or less patients have been conducted in China, and while the results have seemed promising, trials with hundreds of patients need to be conducted to prove the efficacy of plasma therapy. (READ: China asks recovered patients to donate plasma for virus treatment)

It’s also being used in the US for clinical trials, patients who are unable to participate in the clinical trials, and single patient emergencies. The US Food and Drug Administration released recommendations for investigational COVID-19 convalescent plasma treatment on Monday, April 13. – Rappler.com