Memorable moments in the Philippine Senate 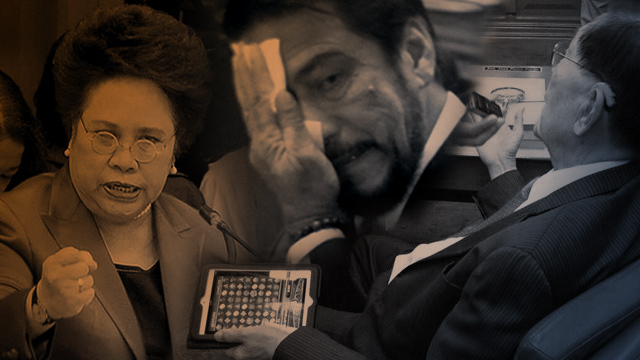 MANILA, Philippines – Senator Ramon “Bong” Revilla Jr’s music video presentation after his privilege speech on Monday, June 9, was probably a first for the Senate, but he’s certainly not the first lawmaker to sing in the halls of the chamber.

Days after he and two fellow senators were charged with plunder in connection with the pork barrel scam, Revilla delivered a speech that was expected to focus on his response to the charge. His speech, however, turned out to be a thank-you list that ended with a music video that featured a photo montage and his own singing voice. The video sparked various comments on social media.

But another senator more than a decade ago had bested Revilla because he sang live a classic hit of the Beatles to express his displeasure with policies of the administration.

Former senator Ernesto Maceda said he remembers singing acapella during the 9th Congress two to 3 stanzas of the “Taxman” to get back at then president Fidel V. Ramos. The former president was later referred to as “the Taxman from Asingan,” his hometown in Pangasinan.

Through the years, the Senate has since witnessed more than just song numbers from its lawmakers. Here’s a list of some of those memorable or we’d-rather-forget moments in the Senate. Let us know if we missed anything, too.

January 17, 2001
WALKOUT/TEARS/DANCE. During the impeachment trial of former president Joseph Estrada in the Senate, the senator-judges who voted against opening the second envelope of evidence outnumbered those who voted for opening it. The envelope contained bank documents that showed over a billion pesos in deposits under the name “Jose Velarde.” The outcome of the voting led to some unforgettable actions in the Senate:

September 26, 2007
WALK-OUT. Senator Miriam Defensor Santiago walked out of the Senate hearing on the National Broadband Network (NBN)-ZTE scam, claiming her disappointment that the involved parties were simply fighting over the commissions they earned. Four years later, the Ombudsman filed a graft case against former president Gloria Macapagal-Arroyo and others due to their involvement in the botched deal.

May 28, 2009
SPLASH. Just as the Senate inquiry on the sex scandal involving Hayden Kho and Katrina Halili was about to begin, former police officer Abner Afuang approached Kho and poured water over him. Afuang was immediately arrested by Senate security and was sent to jail. Kho lost his medical license later on due to the scandal.

August 3, 2011
RESIGNATION. In a privilege speech, then senator Juan Miguel Zubiri announced his resignation after his name was dragged in the 2007 election fraud issue. Later on, the Senate Electoral Tribune (SET) proclaimed Aquilino Pimentel III as the rightful winner in the 2007 elections. Zubiri joined the 2013 senatorial elections but lost.

February 29, 2012
CONTEMPT. On Day 26 of the #CoronaTrial, Senator-judge Santiago asked the impeachment court to cite for contempt prosecutor Vitaliano Aguirre after he was caught on video covering his ears while the lady senator was berating the prosecution panel. The prosecutors had been lectured many times for what she said was their sloppy work and presentation in the impeachment court.

May 22, 2012
WALK-OUT. After former Supreme Court chief justice Renato Corona delivered a 3-hour speech before the Senate, he said he wished to be excused and left the Senate Hall despite Juan Ponce Enrile and lead counsel Serafin Cuevas calling for his return. He returned – this time on a wheelchair – after all exits in Senate were blocked.

August 13, 2012
TEARS. While delivering a speech against the Reproductive Health bill, Senator Vicente Sotto III suddenly cried as he revealed how his first son died because of contraceptive medicine. His first son, he narrated, was born with a weak heart in 1975 and immediately died due to prescribed contraceptives. The RH bill would eventually be signed into law in December of 2012.

September 19, 2012
WALK OUT. After Senators Enrile and Antonio Trillanes IV lashed out against each other in the Senate, the younger senator announced he is bolting the Senate majority coalition and walked out of the Senate. Trillanes accused Enrile of facilitating the division of Camarines Sur, while Enrile discussed Trillanes’ back-door negotiations with China over Manila’s territorial dispute with Beijing over the South China Sea.

August 8, 2013
GAME. Senator Enrile was caught playing the game Bejeweled on his iPad in a Senate hearing on the sex-for-flight controversy. This prompted Santiago to file a resolution that would limit the use of electronic devices during Senate sessions and hearings. – Rappler.com