LOOKING BACK: Binay and the 2007 Manila Pen siege Facebook Twitter Copy URL
Copied
Trillanes recalls that back in November 29, 2007, the plan was for Binay to march with them toward the Ayala Triangle. But after their walkout from a Makati court, Binay is out of reach.

Then a neophyte senator, Antonio Trillanes IV, along with Brigadier General Danilo Lim and other Magdalo officers, dashed out of the Makati Regional Trial Court (RTC) which was hearing their case on the Oakwood mutiny they staged in 2003.

Trillanes, now still senator, recently revealed that Vice President Jejomar Binay allegedly expressed support for the mutineers – and later on backed out. Trillanes told reporters on November 11 that Binay intially agreed to the planned rebellion against the administration of then president Gloria Macapagal-Arroyo.

As narrated by Trillanes, the plan was for Binay – a member of the opposition – to march with them toward the Ayala Triangle, a plan they agreed on before the siege. But after the walkout, Binay suddenly was out of reach, so that the group instead trooped to the nearby Manila Peninsula and took over the hotel. (READ: Binay backed out of 2007 Manila Pen siege, too – Trillanes)

There, the group held a press conference and called for Arroyo’s ouster. They were joined by other personalities like Former Vice President Teofisto Guingona Jr, former University of the Philippines president Francisco Nemenzo and Catholic bishops Antonio Tobias and Julio Labayen. 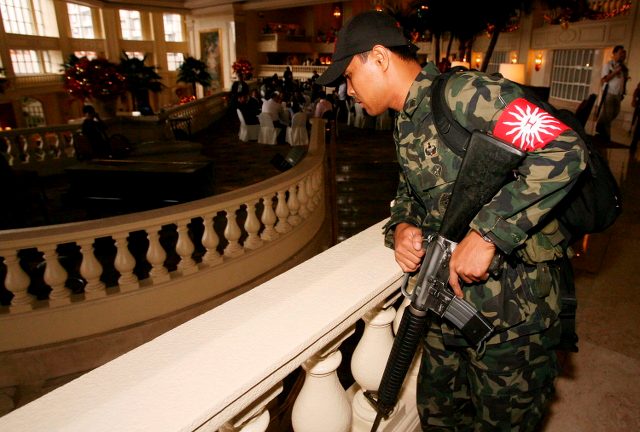 As tension rose, the Philippine National Police declared a red alert status in Metro Manila, ordered all guests to leave the hotel, and set a 3 pm deadline for the soldiers to surrender. The Makati RTC – which the group snobbed earlier that day – had issued an arrest warrant, but was again ignored.

The government responded by deploying soldiers and armored personnel carriers in the  area. Tear gas was thrown inside the hotel, followed by an exchange of fire – with some journalists and civilians still trapped inside. By 5 pm, responders were able to get into the hotel.

Trillanes’ group surrendered, marking an end to the 6-hour standoff. They decided to surrender, according to them, in order to avoid casualties. (READ: Remembering the Manila Pen siege: A detained senator, a hotel that has bounced back) Trillanes and other personalities were detained at Camp Bagong Diwa in Taguig City that evening, and faced charges of rebellion. In 2010, newly-elected President Benigno Aquino III granted amnesty to military and police personnel involved in coup attempts during the Arroyo administration, freeing Trillanes from detention.

Journalists were also brought that same night to Camp Bagong Diwa, where they were interrogated before being released. They filed a class suit for the arrest, but the case was dismissed by the Makati RTC. (READ: From Manila Pen to Bicutan: When the media became the story) 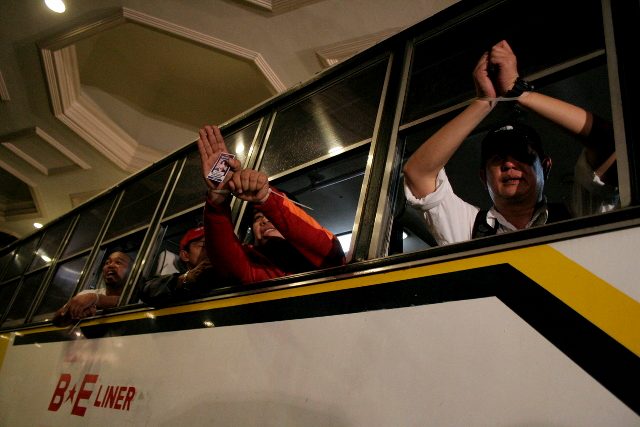 Trillanes and Binay met the day after the siege. The senator narrated that Binay brought with him a lawyer from the human rights group MABINI, and that he was apologetic.

“Come to think of it. He brought along a lawyer not really to help us, but to make sure he would not be dragged in the case,” Trillanes told Rappler.

Binay’s camp had already refuted Trillanes’ story, saying that the senator is trying to “rewrite history” with a different version of “his Manila Peninsula siege, which ended in a fiasco,” and that this is another reason the Vice President was right in calling off the proposed televised debate between the two.

Binay’s spokesman, Cavite Governor Jonvic Remulla, even revealed that some members of the Magdalo group have worked in the piggery in the controversial Rosario, Batangas property.

But if the senator’s claim is proven true, Senator Miriam Defensor Santiago said such actions already constitute the crime of conspiracy to commit rebellion, and could land Binay in jail. – Rappler.com