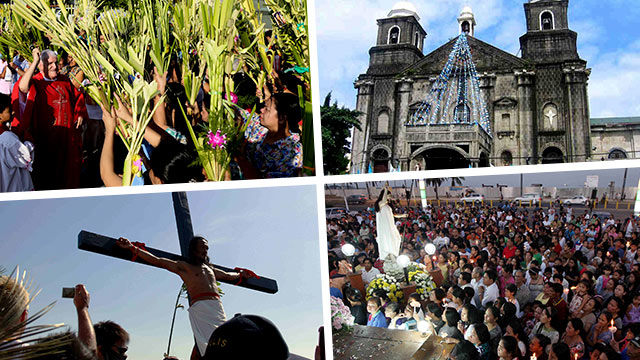 The different levels of devotion of the Catholic faithful are visible this week, as they reflect on the agony and sacrifice of the Son of God to deliver the world from sin.

Here’s a quick overview of rites and rituals during Holy Week in the Philippines.

In the morning of Palm Sunday, churches reenact the triumphant entry of Jesus Christ in Jerusalem, days before his Passion on the cross.

In churches like the Mary Mirror of Justice Parish (MMJP) in Comembo, Makati City, for instance, a Palm Sunday celebration starts with a procession called latag or laying a thing (like a a cloth) on the floor. Pieces of cloth are laid on the priest’s path as he makes his way to the church for Mass. Meanwhile, the parishioners wave their palaspas or palm fronds, which the priest blesses. The palm fronds are brought home by churchgoers.

Meanwhile, the pabasa or the chanting in public of the Pasyon – a 16th to 17th century epic poem narrating the life of Jesus Christ from birth to resurrection – also begins during the Holy Week (or sometimes earlier in some areas).

Holy Thursday starts with the “Chrism mass,” where the Chrism oil – used during baptism, confirmation rites, and the anointing of the sick – is blessed. Priests also renew their vows during the Chrism mass.

Later in the day, the priest officiates the Mass of the Lord’s Supper, where he commemorates Jesus’ Last Supper and performs the washing of the feet ritual with 12 people, like what Jesus did with his 12 apostles.

After the Mass, the altar is stripped bare, and church bells will not be rung until the Easter Vigil.

The Blessed Sacrament is then repositioned at the Altar of Repose, where the hosts (ostiya) for communion, consecrated during the Mass of the Lord’s Supper, are placed.

Churchgoers can pray before these reposed hosts during their Visita Iglesia, the tradition of visiting nearby churches to do a vigil on the Blessed Sacrament. (READ: 8 beautiful Metro Manila churches for Visita Iglesia)

Some devotees join the penitential Alay Lakad, where pilgrims walk for miles from their respective places up to the Antipolo Cathedral in Antipolo City, Rizal. Participants pass by the Stations of the Cross, a series of 14 images depicting the events leading to Jesus Christ’s crucifixion, on their way to the church.

Trivia: According to the Merriam Webster Dictionary, the word “Maundy” comes from the Middle English word maunde, which then derives from the Latin word mandatum (command). It was lifted from Jesus’ words while washing the Apostles’ feet, as told in John 13:34: “A new command, I give you: Love one another. As I have loved you, so you must love one another.”

On Good Friday, parishioners go through the Stations of the Cross.

At noon, the church remembers Jesus’ “Seven Last Words.” Priests and select parishioners share lessons and reflections on each of the 7 expressions of Jesus Christ while on the cross.

At 3 pm, around the time Jesus was said to have died, the Veneration of the Holy Cross is observed.

Afterwards, the procession of the Santo Entierro – a wooden sculpture depicting the dead body of Christ – and other holy images is held.

In Comembo, it is followed by the procession of the Santo Entierro Soledad, where an image of the Virgin Mary is accompanied by “grieving” women dressed in black.

In Barangay San Pedro Cutud, San Fernando, Pampanga, some penitents willingly experience Jesus’ suffering themselves, from being whipped or lashed on the back (by himself or by others) to carrying the cross, and even up to being tied or nailed to the cross. (WATCH: San Pedro Cutud: Via Crucis)

The church is in a state of mourning after Jesus’ death. The cross over the altar remains covered by a black cloth. (Some parishes cover the cross for the entire Lenten season or from Ash Wednesday, while others do it only from Palm Sunday.)

The Easter Vigil commences at night. The Paschal candle – representing the resurrected Christ, the light of the world – is lit at the start of the vigil. Adults and children may also receive the sacrament of baptism during the vigil.

The culmination of the Holy Week is full of rejoicing, as Catholics commemorate Jesus Christ’s resurrection.

Early morning of Easter Sunday, parishioners perform what is called a salubong (a form of meeting or welcoming someone).

Usually, groups of men and women have separate processions, with the men accompanying an image or statue of the risen Christ, while the women have the image of the Virgen Maria Alegria or the Virgin of Joy.

Their paths converge in front of the church, reenacting the reunion of Jesus and his mother, the Virgin Mary. The Easter Mass follows, ending the obsevance of Holy Week. – Rappler.com