FAST FACTS: The A to Z of the University of the Philippines

Jun 18, 2015 2:30 PM PHT
Rappler.com
Facebook Twitter Copy URL
Copied
(UPDATED) In line with the celebration of its founding anniversary, here are fast facts about the University of the Philippines, from A to Z 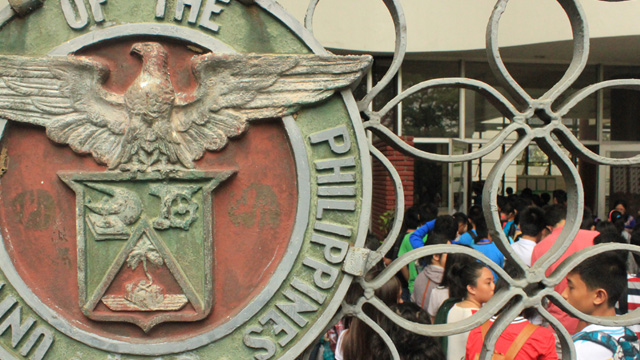 MANILA, Philippines (UPDATED) – The country’s national university – the University of the Philippines (UP) – grows a year older on June 18 as it celebrates its founding day.

On this day in 1908, Act No. 1870 was signed, which established UP as a university for “advanced instruction” and “professional and technical training” for Filipinos. Its first two campuses were then opened a year after – the UP Manila and Los Baños campuses.

Presently, UP consists of 8 constituent universities and one autonomous college in 17 campuses nationwide.

In 2008, former president Gloria Macapagal-Arroyo signed Republic Act 9500, or the new UP Charter, which “provides UP some flexibility to enable it to come up with a competitive compensation package.”

UP has already produced 7 Philippine presidents, 13 chief justices, 36 national scientists, 40 national artists, and a number of alumni of various professions in and out of the country.

In line with the celebration of its founding anniversary, here are fast facts about the University of the Philippines, from A to Z.

Sources: University of the Philippines website, UP Diliman website, UP Alumni website, Philippine Trivia, Office of the Vice Chancellor for Research and Development of UP Diliman, “Nicanor Abelardo, the Man and the Artist: A Biography” by Ernesto V. Epistola, various news websites

* Editor’s Note: The trivia entry for the letter A was replaced with one that is sourced more accurately. We initially mentioned that UP’s original name was “American University of the Philippines” but this information is based on secondary sources and is not stated in Act No. 1870 which established the university.