LOOK BACK: Campaigns to set up a revolutionary gov’t in the Philippines 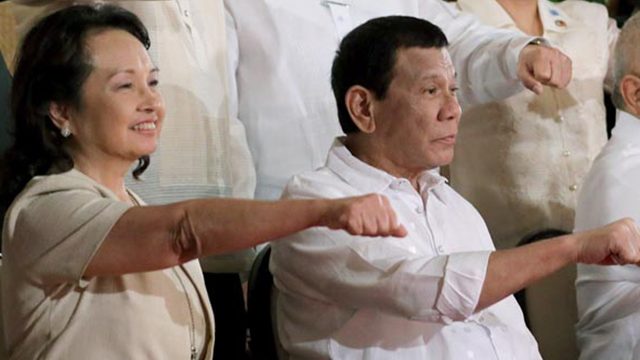 The idea of a “revolutionary government” is again being floated under the administration of President Rodrigo Duterte, even if it has yet to have a legal definition.

A revolutionary government is commonly associated with collapsing all branches of government and throwing out the Constitution to build a new a system as seen fit by the revolution’s leader.

In almost every administration since Marcos, opposition groups have called for the ouster of their respective governments, but it was during former president Gloria Macapagal Arroyo’s time that groups came up with concrete models of a revolutionary government.

Under the Duterte administration, experts are confused by renewed calls for a revolutionary government as it is the President’s supporters who are calling for it – even as the revolution’s supposed “leader” Duterte is already the country’s incumbent leader.

Duterte himself had threatened to declare one in 2017, and then retracted the threat. There were some calls again in 2018 and 2019. Duterte disowns the current calls, made by an organization that campaigned for him in 2016. Vice President Leni Robredo and several law enforcement officials have thumbed down the idea, too.

Are the revived calls for revolutionary government legal? 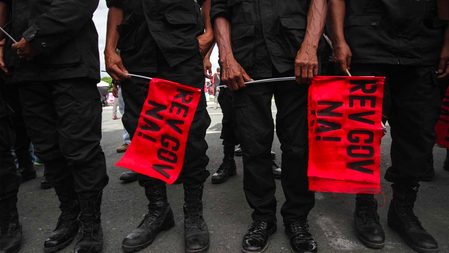 What gave rise to calls for a revolutionary government in the past? Here’s a review of those.

When former president Joseph “Erap” Estrada was ousted from office in 2001, the Supreme Court (SC) had to decide whether or not Arroyo’s presidency was constitutional. Estrada’s supporters called it a revolutionary government.

The SC ultimately declared legal Arroyo’s government and the manner in which she was swept to office through People Power.

Public sentiment toward the Arroyo government, however, changed overtime. Over 300 junior officers of the Armed Forces of the Philippines (AFP) mounted the Oakwood mutiny in 2003. Lieutenant Senior Grade Antonio Trillanes IV of the Philippine Navy told reporters it was “not a coup d’etat, we are not attempting to grab power, we are just trying to express our grievances against this government.”

In June 2005, the “Hello Garci” scandal erupted. Arroyo was accused of coordinating with then-elections commissioner Virgilio Garcillano to tamper with the 2004 election results.

This was when talks of a revolutionary government really took off. There were around 10 oust-Arroyo camps that supported a third EDSA-type uprising, which would lead to the setting up of a “revolutionary council,” where civilians would be the dominant members.

Retired army general Fortunato Abat and television evangelist Eddie Villanueva were some of the individuals who came up with models of a revolutionary government, should the country succeed in ousting Arroyo.

Under this revolutionary government, citizens’ concerns would be grouped into security, governance, and political sectors – each with a body that would report to the transitional government council.

This model was essentially a military junta with a government program that would curtail some basic human rights, like the right to strike. It was supported by a Program for National Salvation espousing “authoritative governance.” It entailed drafting a new constitution as well.

Villanueva’s model of a revolutionary government would have been established through a “bloodless revolution” backed by the military and the police as “protectors of the people.” The people in power would focus on putting “corrupt officials” in jail and establishing “authentic democracy.”

Even then-San Juan mayor Jose Victor Ejercito, son of the ousted president Estrada, backed proposals for a possible revolutionary government after Arroyo. Ejercito proposed that there would be a council with 9 to 15 members who would represent major sectors: business, workers, farmers, youth, and political parties.

Ejercito told reporters that his father should be part of the council because he still enjoyed popular support. He suggested other opposition leaders, like Senator Panfilo Lacson and Villanueva, be included in the council.

For a time, former Manila Archbishop Jaime Cardinal Sin was also considered to become part of the revolutionary council, regardless of which model would be adopted. Sin, however, died on June 21, 2005, within the same month the scandal emerged and before the oust-Arroyo rallies intensified.

On July 8, 2005, 10 appointed government officials known as the “Hyatt 10” resigned from their posts to signal their withdrawal of support for Arroyo.

In 2007, Arroyo faced another ouster plot when members of the military occupied the Manila Peninsula hotel in Makati. Led by Trillanes and Brigadier General Danilo Lim, the soldiers held a press conference calling on Arroyo to step down.

This time, they were clear in their demand for a takeover. “We make this faithful step of removing Mrs Macapagal Arroyo from the presidency, and undertake the formation of a new government,” said Lim.

Trillanes, Lim, and some officers eventually surrendered to end the 6-hour siege, while others fled from authorities. Arroyo was able to finish her term.

Some individuals, and even President Duterte himself, have been behind several – actually yearly – calls for a revolutionary government since 2017.

In August 2017, Duterte said it would take a revolutionary government for the Philippines to “really go up,” but it wouldn’t happen in his watch. Two months later on October 13, the President took a step back and warned that he would declare one once he sensed that a destabilization plot was afoot to replace him.

Duterte supporters rallied in Mendiola on November 30, 2017, in support of a revolutionary government. They demanded the following:

The demonstrators “granted” Duterte the powers to declare a revolutionary government to be able to rewrite the Constitution and effect a shift to a federal system of government. Critics said this would instill a dictatorship and concentrate power with Duterte.

In September 2018, Interior Undersecretary Epimaco Densing reportedly called on Duterte during a public forum to declare a revolutionary government to hasten the country’s transition to a federal system. Densing was spotted in the 2017 Mendiola rally.

He was the main guest of a citizens’ group calling itself Mula sa Masa Duterte Movement (MMDM).

The next day, Department of the Interior and Local Government Secretary Eduardo Año disowned the stance, and said it was Densing’s opinion.

In April 2019, Duterte, outraged at criticisms of his order to review all government contracts, warned he would suspend the writ of habeas corpus and declare a “revolutionary war.”

Vice President Leni Robredo slammed it as an “irresponsible” way of responding to criticism.

MNLF founder Nur Misuari is a staunch supporter of Duterte’s federalism proposal, which remains pending in Congress. With a revolutionary government, Duterte could pursue federalism without the scrutiny of lawmakers.

Legal scholars and critics point out that Duterte need not change the current system to fix persistent problems. Instead, he could invoke emergency powers, which are less prone to abuse.

The possibility of a revolutionary government surfaced again in August 2020, at the height of the coronavirus pandemic, as confirmed cases neared 200,000. Hundreds of Duterte supporters gathered in Pampanga to make fresh calls.

Supporters wanted a revolutionary government that “shall reign over our country and people, only up to June 30, 2022” and asked for the adoption of a new constitution. Malacañang rejected the calls.

Lawyers denounced the claim as unconstitutional while Robredo called it a “big joke.” Robredo, a lawyer herself, said that a call to throw out the Constitution is in itself illegal.

University of the Philippines constitutional and political law professor John Molo also said the calls can be seen as inciting to sedition – now an even more sensitive topic under the newly signed Anti-Terrorism Law of 2020.

The proponents of the new calls for a revolutionary government could be in danger of violating a law the President himself put priority on in cracking down against terrorism and rebellion. – Rappler.com