VACCINE DRIVE. Parishioners at the Minor Basilica of the Black Nazarene in Quiapo Manila avail of COVID-19 vaccine booster shots at Plaza Miranda on March 11, 2022.

Facebook Twitter Copy URL
Copied
This week of April 24, 2022, we look at how the government is ramping up vaccination efforts in the next two months while millions of Filipinos have yet to get their COVID-19 vaccine doses

MANILA, Philippines – The Philippines reported a decline in coronavirus infections, with average cases at 224 per day from the week of April 12 to April 18 – 17% lower than the week before. The number of COVID-19 beds in intensive care units remains as low-risk, along with total beds dedicated for COVID-19 patients.

The Duterte administration is down to its last two months spearheading the government’s coronavirus vaccine drive and, to date, a significant gap remains between the number of people who have gotten vaccinated (roughly 60% of Filipinos) and the portion of the population that has expressed willingness to get a shot (about 87%).

In the United States, a new subvariant is spreading and may be competing with the original Omicron, as well as some of its offshoots like BA.2.

Moderna earlier announced that its bivalent vaccine candidate, which combines equal mRNA amounts of spike proteins from the original SARS-CoV-2 strain and the Beta variant, appeared to offer better protection against newer variants.

The WHO strongly recommended giving the anti-viral pill Paxlovid to mild and moderate COVID-19 patients at highest risk of hospitalization because they are either unvaccinated, immunocompromised, or older, saying it is the “best therapeutic choice for high-risk patients to date.”

In case you missed it:  Since a “new normal” was declared on March 1, 2022, over half of the Philippines have now seen quarantine restrictions relaxed, with all establishments and public transport allowed to operate at full capacity.  How does this affect the virus in the Philippines?

Watch this Rappler explainer and listen to what health experts have to say:

WATCH: Is the COVID-19 pandemic over? 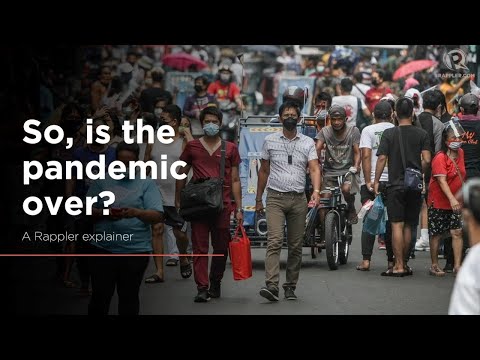