COVID-19 Weekly Watch: Where the pandemic will take us in 2022 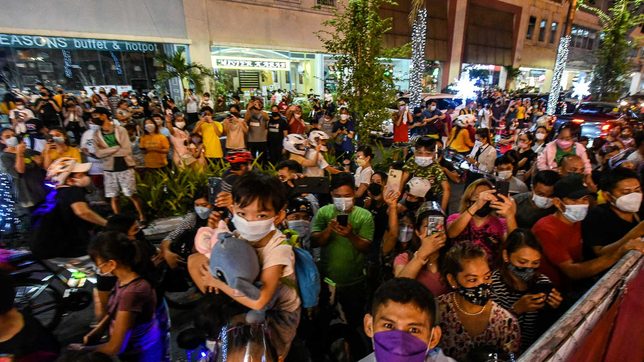 ANTICIPATING NEW YEAR. To signal the start of the yuletide season, Araneta City lights a 100-foot Giant Christmas Tree on November 11, 2021. The event has been a fixture of every Filipino Christmas celebration for the past four decades.

Facebook Twitter Copy URL
Copied
As 2021 closes, we’re watching how the Omicron variant is driving the next phase of the pandemic and forcing countries to catch up in its responses. Here’s what we’re watching this week of December 20, 2021.

The Philippines’ closes 2021 with lower case numbers and hospitalizations, placing the country at minimal risk for COVID-19. In terms of areas to watch, health officials are looking closely at Olongapo City, Aklan, Iligan City, Camiguin, and Tawi-Tawi after they recently registered a slight uptick in cases.

New data is providing a clearer picture of Omicron’s spread, severity, and effect on vaccines, hinting at unprecedented transmissibility and a steep challenge ahead for countries. Scientists continue to learn more about the dynamics of Omicron, but we know enough at this point to act.

Health officials moved up the eligibility for booster shots from six months to three months for people vaccinated with a two-dose shot, and two months for those given the Johnson & Johnson vaccine. The shorter interval minimizes risks associated with a longer gap in light of the threat posed by Omicron.

Novavax on its way

Novavax recently received emergency approval from European regulators and the WHO, paving the way for a next-generation vaccine to become available to more countries across the world.

While Omicron continues to bring uncertainty over the next phase of the pandemic, health experts say current response measures still work – and are important as ever to keeping the virus at bay. There’s no better time to observe these than the holiday season, when million of Filipinos venture out into public spaces and mingle in homes.

Before you go: While the health crisis isn’t over, we can take stock of how far we’ve come since March 2020. Rappler put together 8 takeaways in the Philippines’ vaccination campaign, the largest public activity the government has mounted in history and a pillar of the pandemic response.

This will be our last edition of COVID-19 Weekly Watch this year. We will be back again on January 10, 2022. – Rappler.com