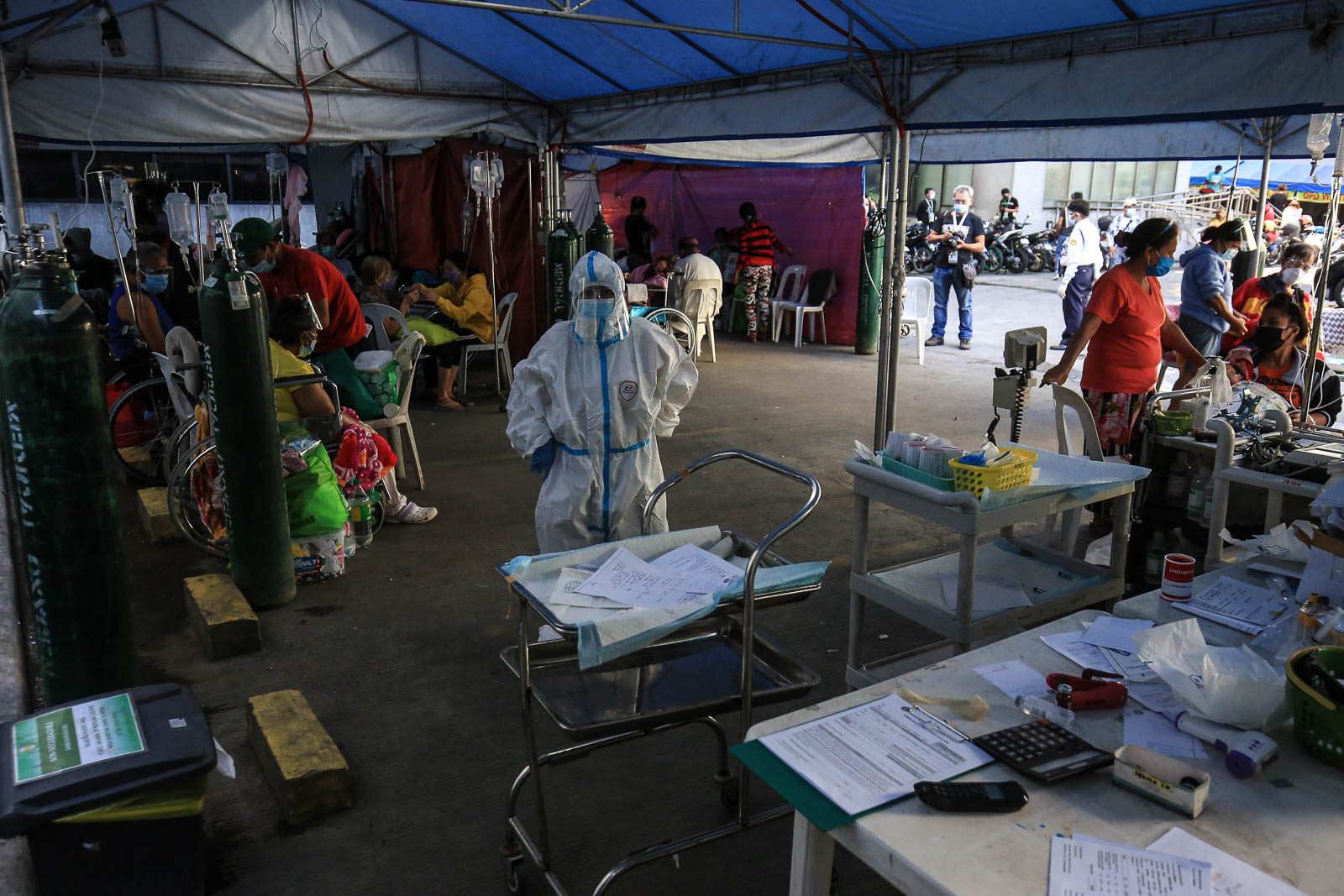 SWAMPED. Healthcare workers of the Pagamutan ng Dasmariu00f1as in Cavite perform treatment inside a temporary tent to accommodate the influx of arriving patients on January 7, 2022.

Facebook Twitter Copy URL
Copied
Going into the week of January 10, 2022, we take stock of how Omicron is changing the pandemic landscape and how we should respond

We opened 2022 with caseloads soaring to levels not seen since September 2021 – the last time COVID-19 infections peaked in the country due to a surge partly driven by the Delta variant. This time around, it’s the hypertransmissible Omicron we’re watching, as it is poised to shatter records set by Delta. Current cases at the 20,000’s are nearing the country’s previous peak of over 26,000 cases, while the positivity rate is already at a new high of 40%.

After capping 2021 with all areas of the country on Alert Level 2 – the second to the least strict quarantine classification – officials held off on plans to shift the country to Alert Level 1. Instead, several areas are back on Alert Level 3, as the country’s Omicron wave has yet to crest. Hospitalizations have not yet hit alarming levels, but the rate at which admissions are increasing is markedly faster, especially in Metro Manila.

It’s been just a little over a month since Omicron was designated as a variant of concern, but with more of our friends and family infected with COVID-19, it seems the virus is closer to us than ever. Yet, the portion of cases needing hospitalizations seemed to be lower than in previous increases.

How worried should you be?

In this edition of weekly watch, we’ll tackle what Omicron means for the virus, the government’s response, and personal activities.

What it means for the virus

Before the end of 2021, the World Health Organization (WHO) warned that Omicron had the potential to overtake Delta, which up until then had been regarded as the fastest and fittest variant. Fast forward to where we are today, January 2022, and we can see this is somewhat playing out across the world: In this regard, “Omicron’s main threat is its extreme contagiousness,” noted the Atlantic’s science reporter Ed Yong. And with billions of people around the world still unvaccinated and transmission remaining high, new variants can still emerge.

What it means for our response

The ability of Omicron to spread so quickly means there will be less room for error and greater need for quick action in the government’s response. There have been significant updates to policies and key developments underway:

As COVID-19 lingers and Omicron progress, some of the other issues we’ll be watching closely in the government’s response include how officials plan to reach the over 2 million unvaccinated seniors, what investments will be made to improve ventilation, and how testing costs might be lowered for the public.

What it means for our vaccines

Despite the rise of Omicron, vaccines still reduce the risks of developing severe disease, hospitalization, or dying due to COVID-19 – and more so if you’re boosted. That’s a great a reason as any to get the vaccine if you haven’t yet, or to get your booster if you’re already eligible.

What it means to you and me

All of this is understandably overwhelming, and in some ways it can feel like we’re back in 2020. But even with Omicron’s extraordinary contagiousness, practicing the same health measures like masking, distancing, and ensuring good ventilation will continue to protect us.

In case you missed it: If you’re eligible and thinking about getting a booster shot, Rappler has put together this guide on how you could get a booster and what you should expect after getting boosted, based on the experience of people who have gotten their additional jabs: