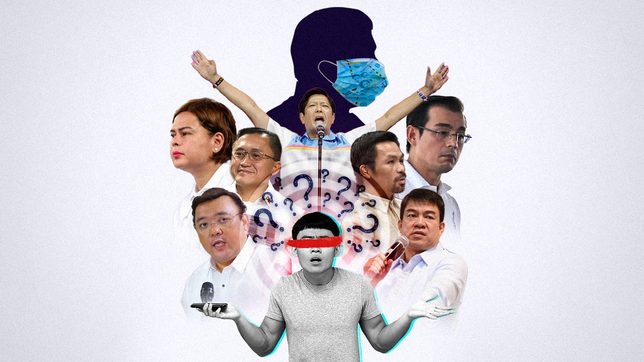 Facebook Twitter Copy URL
Copied
The year before the 2022 presidential election was bound to be a wild ride. Add Duterte flip-flops and a pandemic to the mix, and you get radioactive political cocktail.

MANILA, Philippines – Filipinos have long known Philippine politics to be a circus and politicians ready and able to pull off stunning stunts for the sake of ambition. But the year 2021 had the public doing double takes more frequently than usual.

Chalk it up to 2021 being the year before a presidential election. Chalk it up to the pandemic supercharging political statements. Then there’s the President who has elevated the lowbrow art of flip-floping to a whole new level.

Here’s the year 2021 in episodes of political melodrama.

On his post-presidency plans, Duterte didn’t just backtrack, he richocheted. How quaint his June declaration that he was “resisting” calls of his allies for him to run for vice president and that he planned to “retire” after his term ends. He ended up accepting their nomination to run for VP, then dramatically rejecting it at the last minute to fall back on his retirement plans, then shelving that again so he could run for senator. Was it something about the Christmas holiday that led him to finally sign his statement of withdrawal from the senatorial race last December 11? Will this be the last time we see Presidential Security Group descend on the Commission on Elections offices for a worn-out Duterte turnaround? One thing is for sure: laws state Duterte can no longer substitute another candidate unless that person dies or is disqualified and has the same surname as his.

2. Harry Roque, who defended drug war and mocked ICC, applies for a role in the International Law Commission, fails to get in, then runs for senator under the slate of a dictator’s son.

Duterte’s mouthpiece had envisioned himself a maker of international laws in a post-Duterte world. He failed in his bid and, after weeks of waiting for his boss’ daughter to firm up her own electoral plans, finally saw political stars align in a way that would let him run for senator. What he didn’t count on was having to support a Marcos too, but, like he said, some politicos think they just have no choice. Still, to many, Roque’s alliance with a son of a president whose regime tortured and killed many is a further blow to his credentials as a human rights advocate.

Soledad Roa Duterte was among Mindanao’s most prominent anti-Marcos activists in the 1970s and ‘80s, leading the Yellow Friday Movement in Davao City. Five decades later, her granddaughter is helping the dictator’s son return to power. Funny thing is, Sara could have prevented a Marcos comeback herself by running for president, since early surveys showed she was a favorite for the post. Sara’s decision was indeed a WTF moment even for her father, who could not imagine why she, with her great numbers, would slide down for Marcos.

4. Isko Moreno, belittled and attacked by Duterte, now wants to be Duterte’s anointed one.

When Duterte mocked Moreno for his showbiz past and tried to keep national government aid from him, the stage seemed set for a face-off between a young, dynamic mayor and a vitriolic, frothing-at-the-mouth “Mayor President.” But a Marcos presidential bid and a Bong Go withdrawal changed all that. Now, Moreno seems to think it’s in his best interest to be in the President’s good graces, prompting him to make several pro-Duterte remarks. It’s up to the President if outrightly supporting Isko, whom he once praised as the better leader, is the right card to play. Isko will need all the help he can get to defeat Marcos – help that is not likely to come from opposition groups who’ve cast their bets on Vice President Leni Robredo.

Duterte’s national party, PDP-Laban, was the loser in the waiting game played by these three politicians. Duterte and his longtime aide Senator Bong Go held on like shipwrecked sailors to the hope that Sara would run for president. When she defied their expectations, the two men were left to last-minute scrambling – Duterte settling on a senatorial bid and Go throwing caution to the wind by filing for the presidency. Go eventually gave up that presidential bid as well. PDP-Laban (or one of its factions), reduced to a vehicle for Duterte continuity, now lacks a standard-bearer to serve as a vehicle for anything at all. Even the other faction could not field a presidential bet because of the party’s messy in-fighting. It’s a sad state for a ruling party, especially one with a colorful 40-year history and founded by democracy champions Aquilino Pimentel Jr. and Ninoy Aquino.

6. Duterte enablers Pacquiao and Pimentel split from the President.

Once upon a time, senators Pacquiao and Pimentel were staunch allies and party mates of the President, defending his drug war and other policies. But after disagreement with other party mates regarding 2022 plans, the two politicians split, and declared Duterte no longer the embodiment of party values. Duterte, in turn, has lobbed insults and criticisms at Pimentel and Pacquiao. Analysts say such parting of ways is par for the course – just the fragmentation of already shaky alliances formed around the Duterte presidency. But, last November 9, Duterte and Pacquiao may have patched things up during a short meeting initiated by the boxer-turned-lawmaker.

In his early years in power, Duterte never thought twice about bad-mouthing an American president and senators, calling the United States “lousy” and declaring his “split” from the super power, also the Philippines’ oldest military ally. But the COVID-19 pandemic changed all that. It was US donations of vaccines, the largest amount from a single country, that led Duterte to abandon his plan to scrap the Visiting Forces Agreement. Duterte even recently accepted President Joe Biden’s invitation to attend his democracy summit and give a speech. There were no expletives and diatribes about US war crimes this time.

8. Duterte pulls out all the stops to defend businessmen, government officials involved in questionable pandemic contracts.

People would have likely forgotten about, or never come to hear of, Duterte’s powerful Chinese ex-economic adviser Michael Yang were it not for the biggest crisis to hit his presidency: the pandemic. Government records and Senate testimonies revealed Yang’s connections to billions-worth of pandemic contracts awarded to Pharmally Pharmaceutical Corporation, whose executives have links to Yang. The big question is, did Duterte or those around him help Pharmally bag those deals? Though this question remains unanswered, Duterte has only raised suspicion by defending to the hilt Yang and government officials involved in the deals. He went so far as ordering Cabinet officials to shun Senate hearings investigating the controversy and ordering police not to implement arrest warrants issued by the Senate.

In the face of Bongbong Marcos emerging as a presidential race frontrunner in pre-campaign period surveys, you’d think the opposition would strategically unite to keep him from Malacañang. Two candidates openly claim to be opposition, Vice President Leni Robredo and labor leader Leody de Guzman. But despite the need for unity, ugly words have been exchanged by their supporters both offline and online. There is bickering on who is “strong” and “weak” opposition, over Robredo’s stance on the anti-communism task force, and some leftist groups’ hesitation to openly support the Vice President. While some exchanges have been in the spirit of constructive criticism, there is worry that the in-fighting will just deepen fissures to once again spoil an opposition victory in 2022, and deliver the presidency in a silver platter to a Marcos.

10. Duterte admin spokesmen, including a red-tagger, try for the presidency.

Other Duterte allies have used their ties with his presidency to gun for senator or key local positions. But two men are reaching for the stars: former presidential spokesman Ernesto Abella and anti-communism task force spokesman Antonio Parlade Jr. Though both the President’s men, the two couldn’t be more different from one another. Abella was a spokesman who was short on words, soft-spoken, and unremittingly polite. Parlade got into all kinds of scrapes with innuendos linking lawmakers, charity organizers, beauty queens, and celebrities to communists. For many political observers, the presidential bids of the two officials came from left field.