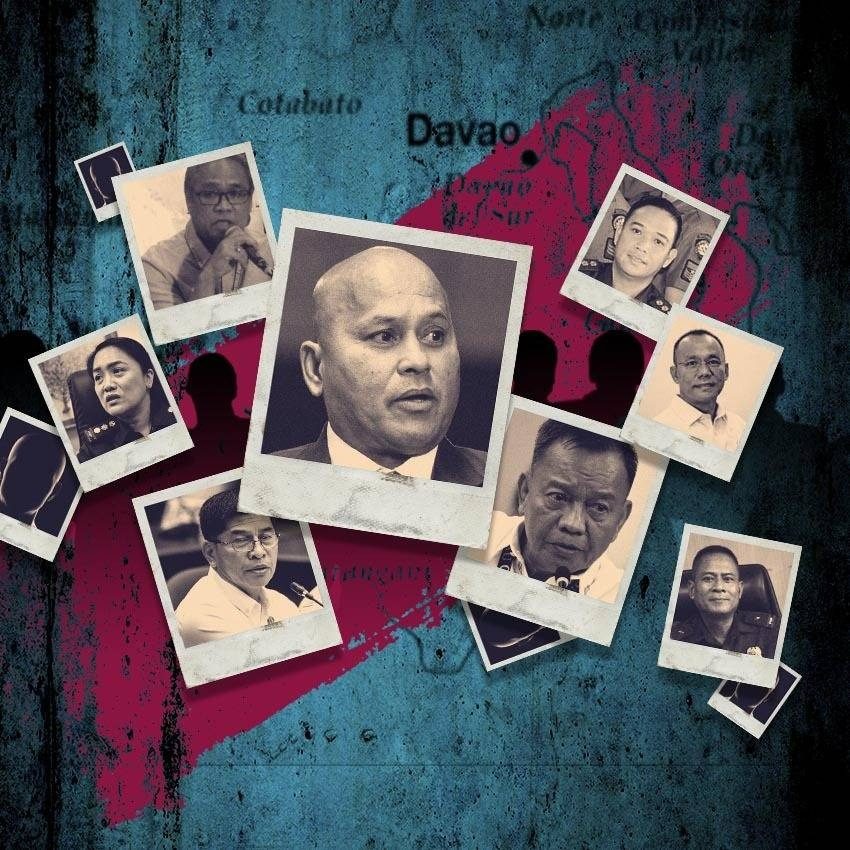 When self-confessed  former Davao Death  Squad (DDS) gunman Arturo Lascañas presented himself to the International Criminal Court, he said he remembered the people whom he worked with.

Like him when he was with the killing squad, he said they were mostly policemen.

The way Lascañas described it, the DDS operated under the police. It was a shadow group borne of an organization that had sworn to “serve and protect” all, but which instead followed kill orders from Rodrigo Duterte.

This dark group branched out, Lascañas said, as Duterte instructed police commanders to create death squads of their own to carry out kill operations. The ranks of cops who became members of this group ranged from chief to squad policeman.

And when Duterte became president, the group only grew even more powerful.

After Lascañas named these cops in his ICC affidavit, Rappler took a look at their most recent assignments to see where they had gone years after “Superman” – their code name for Duterte – had risen to Malacañang.

We found that most of them had retired, but those who remained in the police force and in the government had been promoted or risen in ranks either in Davao or in Manila.

From being the chief of police of Davao City who later engineered Oplan Tokhang when he became chief of the Philippine National Police, Dela Rosa is now a senator whose term will expire in 2025.

In the 2019 elections, he ranked 5th among winning senators, gaining the approval of 19 million Filipino voters.

As Duterte’s most trusted police chief, Dela Rosa was accused by Lascañas of carrying out kill orders from Duterte for years in Davao, then taking them to the national level when he became the top cop.

We reached out to Dela Rosa but he refused to comment.

The DDS’ abduction operations, according to Lascañas, were the “brainchild” of Lapeña. This idea, Lascañas said, was approved by Duterte himself. Lapeña is currently serving as the chief of the Technical Education and Skills Development Authority or TESDA.

Under Duterte’s administration, Lapeña also served as the chief of the Philippine Drug Enforcement Agency and the chief of the Bureau of Customs – a post he was removed from after a multibillion-peso worth of shabu (methamphetamine) smuggled into the Port of Manila got past the customs officials.

In a text message to Rappler on November 17, Lapeña said “there is no truth” to the accusations of Lascañas.

Lascañas recalled being ordered by Danao himself sometime between 2014 and 2016 to “double time” on their killing of drug suspects.

From being the last Davao City police chief Duterte worked with when he was mayor, Danao has risen to become the chief of the National Capital Region Police Office (NCRPO). He was even seen as a strong contender for PNP chief, owing to his close ties to Duterte. Danao belongs to the Philippine Military Academy (PMA) Sambisig Class of 1991. He retires in August 2023.

Rappler reached out to Danao through text and Viber, but he has not replied as of posting.

Delvo is a policeman known to be close to former police chief and now senator Ronald dela Rosa. He belongs to the Philippine National Police Academy (PNPA) Class of 1995.

He is currently chief of the management division of the PNP’s Directorate for Comptrollership, which manages the PNP’s budget.

Lascañas described Delvo as someone who has “embraced the evil one’s policy of killings.”

Delvo allegedly co-led a team of DDS members who kidnapped and killed two Muslim small-scale miners in Mati in Davao Oriental sometime between 1999 and 2000.

In 2007, Lascañas said he joined Delvo in killing former policeman Allan Estrada, after which they planted a gun as evidence against him.

Delvo, according to Lascañas, replied with, “Padalhan taka balato (I’ll send you your share),” referring to the reward money. Lascañas said he got P200,000.

Rappler sought the comment of Delvo on November 16, but, in a phone call, he declined to comment.

Lascañas tagged Leonardo as a DDS member, but did not specify any operation he was supposedly a part of.

Leonardo graduated from the PNPA in 1998. Before retiring from the police service, he was the chief of the Criminal Investigation Group in the Davao Region. He was also briefly the commander of the Manila Police District Moriones Police Station in 2017 when “nanlaban” killings were rampant in the capital.

Leonardo is currently undersecretary for protected areas at the Department of Environment and Natural Resources.

Rappler sought Leonardo’s comment through DENR spokesman Undersecretary Benny Antiporda, but he has not replied as of posting.

Abude was also named by Lascañas as being involved in the DDS, but did not mention him in specific operations.

Abude, according to Lascañas, led the Heinous Crime Task Group (HCTG) between 2005 and 2008, when members allegedly abducted six  shoplifters who were eventually killed.

He is currently the chief of the Davao City Transportation and Traffic Management Office.

Rappler sought the comment of Abude through email on November 17, but he has not replied as of posting.

Rivera is a former policeman who was also identified by Lascañas as being involved in the Davao Death Squad. He served as the regional director of the PDEA in the Davao Region up until he retired in November 2021, as confirmed to Rappler by the PDEA national headquarters.

Like Delvo, Rivera was accused of co-leading a team of DDS members who allegedly kidnapped and killed two Muslim small-scale miners in Mati in Davao Oriental sometime between 1999 and 2000.

Like Abude, Rivera was accused by Lascañas of taking part in the abduction and killing of alleged shoplifters between 2005 and 2008.

Rappler sought the comment of Rivera through the PDEA, but he has not replied as of posting.

Garma is the lone female cop accused by Lascañas of involvement with the DDS. Garma got closer to Duterte from 2011 to 2015, when she served as the station commander of two problem areas of Davao City: Sasa, which covers their seaport and airport, and Sta. Ana, which encompasses Davao’s bustling Chinatown.

Under the Duterte administration, she became the chief of the Cebu City police and remained at odds with then-mayor Tomas Osmeña, then retired early to head the Philippine Charity Sweepstakes Office.

Lascañas claimed in his affidavit that Garma told him personally that she handled a group of hitmen, following the instruction of then mayoral aide and now senator Bong Go.

Rappler sought the comment of Garma through text and Viber, but she has not replied.

Pelonia, according to Lascañas, supervised 50 or so DDS “force multipliers” – meaning civilians – who each received from P7,000 to P10,000 from the office of Duterte. He was once a police commander in Davao.

According to another Davao policeman accused of involvement with the DDS, Enrique Ayao, Pelonia is currently being detained. Ayao said he does not know the charge against Pelonia.

Sagarino was accused by Lascañas of also being a part of the HCTG, but he did not indicate incidents where he took part in a killing.

Sagarino is currently serving as the anti-scam unit chief of Davao City.

Cops still in active service, as of November 2021

Lascañas said Lao, Jumawan, Ayao, and Medina were former members of the DDS through the HCTG, a police unit that took orders from then-mayor Duterte.

Of the four, Lao and Ayao have risen the most in rank, becoming heads of their own units.

Lao became the chief of the mobile patrol unit, which supports operatives and helps with controlling traffic. Ayao, meanwhile, became the chief of intelligence of his own station – a key position for keeping crucial information related to operations, including anti-drug campaigns.

Jumawan has become a team leader in his station’s investigation section.

Medina, meanwhile, does not hold any key position.

Jumawan was interviewed by the Commission on Human Rights in 2009 when it was investigating killings in Davao City. Jumawan then confirmed the existence of the Heinous Crimes Investigation Section (HCIS), which Lascañas said was a part of the DDS. Jumawan confirmed that Lascañas worked with the HCIS, but denied it was being used to kill people.

Rappler called the units of the four on November 16 and 17, but they were not present in their stations, save for Ayao, who denied Lascañas’ accusations. Lao was on sick leave, according to his subordinates.

Most of the policemen named in Lascañas’ affidavit have retired from the service. When he was still part of the DDS, Lascañas said the names above were members of the HCTG.

Among those in the list of retirees, the following stand out:

Rappler obtained information about their retirement through the Davao City Police Office.

At least two of them held a key position after retiring. Desiderio Cloribel became the chief of the Traffic Management Center of Davao City, while Sonny Buenaventura – described by Lascañas as Duterte’s chief of security and driver – became civil security officer of the Davao City Hall, according to a June 2016 story by Sunstar. According to Ayao, Buenaventura has retired and is residing in Davao.

At least three of them have died, according to Davao police: Fulgencio Pavo, Ben Furog, and Jun Cabalinan.

Pavo became a barangay captain before he died. He also spoke with the CHR in 2009, confirming the existence of the HCIS.

One policeman named by Lascañas, Jay Francia, was confirmed by the Davao City Police Office as having worked under the HCTG. But he has ceased working with the police as of November 2021.

One name given by Lascañas to the ICC that he claimed was a policeman and was a DDS member through the HCTG did not match any name in the records of the Davao City Police Office – a certain Tata Miguellano.

While some of the policemen, both incumbent and retired, were summoned to the Senate in October 2016 during its probe into the DDS, none of them have been publicly accused of committing crimes. – Rappler.com