MANILA, Philippines – All eyes in Southeast Asia are now on the 28th Southeast Asian Games (SEAG), happening in Singapore from May to June 2015.

The Philippines is under tremendous pressure to bounce back strong this year after a dismal 7th place finish in 2013, when the country's delegates brought home a small stack of 29 gold, 34 silver and 37 bronze medals from Myanmar.

As we await the results of the ongoing Games, here are some facts and details on the Philippines' participation in SEAG.

1. The Philippines first joined the Games in 1977, along with Indonesia and Brunei. Prior to that year, the tournament was officially called Southeast Asian Peninsular Games, as only countries within the Southeast Asia peninsula were admitted. 4. Three Filipinos were named Most Valuable Player of the Games on 3 different occasions. Awarded best male athletes were Eric Buhain (1991) and Miguel Molina (2007), while named best female athlete was Akiko Thompson (1989). All of them were swimmers.

5. The host country has the right to include certain events, even incorporate those that are indigenous to it. In 1991, the Philippines added arnis as a demonstration sport, which gave the country 14 medals (10 golds, 3 silvers, 1 bronze). It was incorporated as an official sport in 2005, which gave the country 6 medals (3 golds and 3 silvers) to tie with Vietnam. Arnis was never played in SEAG after 2005.

6. Track and field athlete Elma Muros was the youngest Filipino athlete to participate in the SEAG, as she was only 14 years old when she joined the 1981 Games in Manila. She is also one of the most medalled Filipino athletes in SEAG history, as she has brought home 15 gold medals.

7. In the 2013 Games in Myanmar, wrestler Jason Balabal – a gold medalist in the 2011 Games – was chosen to be the country's flag bearer. During the opening ceremony in Myanmar, Balabal – a native of Ifugao – wore the traditional bahag outfit. 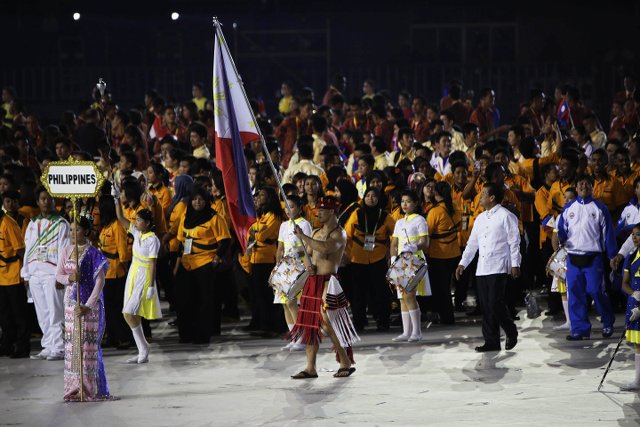 8. In the 2007 Games in Thailand, 6 Filipino boxers forfeited their gold medal matches to protest the alleged bias in judging that favored the host country's athletes. At that time, the Filipino athletes were supposed to fight in the remaining 7 of the 10 gold medal bouts – all against Thai boxers – but they decided not to fight. In effect, they took home silver medals.

9. In the 2009 Games in Laos, officials of the Philippine delegation pulled out the cycling team, which was barred from participating because most of them have no International Cycling Union license. Only one of them – cyclist Marites Bitbit – has a license, but she was included in the pull out.

10. The Philippine basketball team won the the 2007 SEAG championship, but wasn't able to defend the title in 2009 as host country Laos decided to scratch the game due to the country's lack of adequate facilities. The Philippines even offered help to organize the sport but nothing came of it. Fortunately, the team was able to defend the title when basketball was revived in the 2011 Games in Indonesia. – Rappler.com