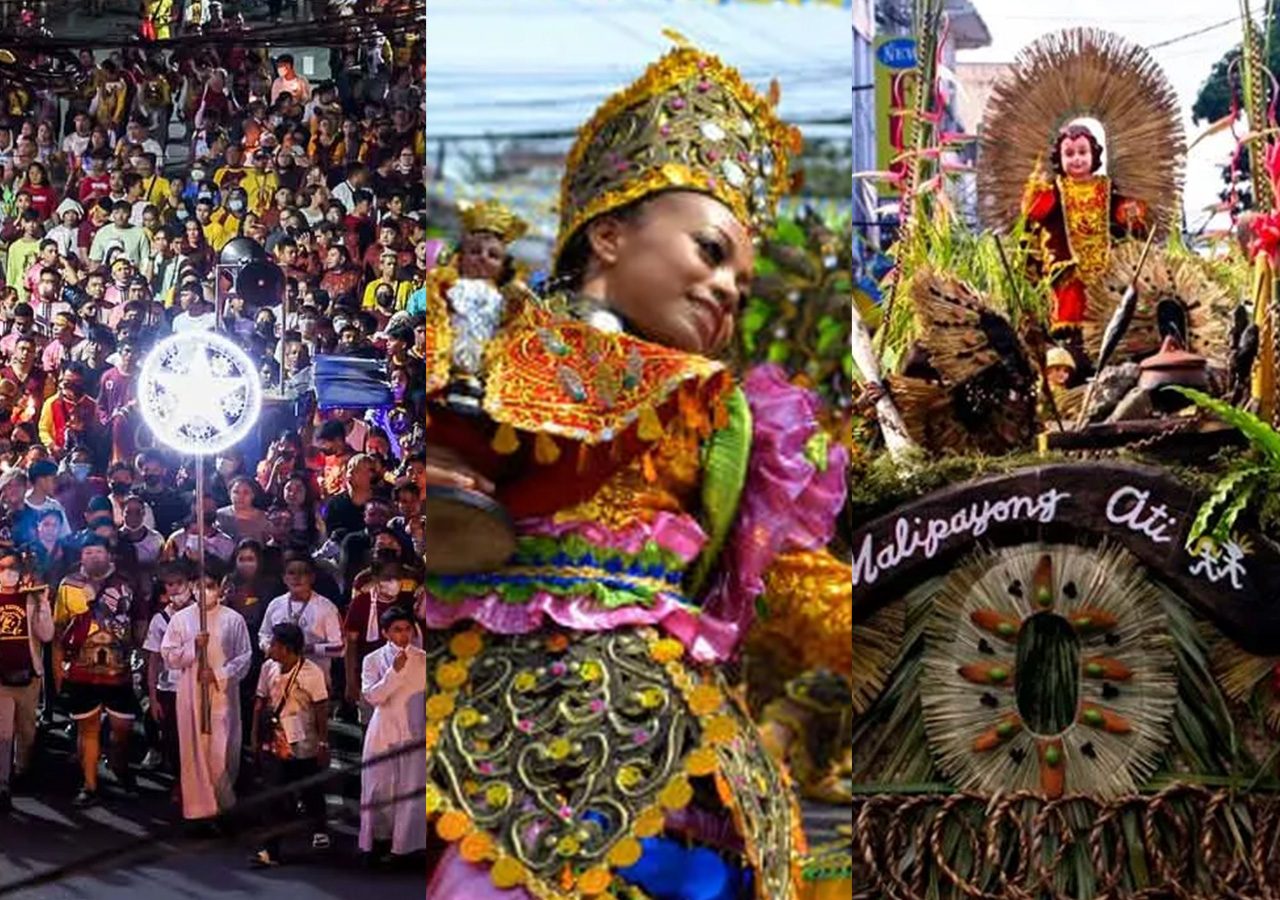 FIESTAS. The most popular fiestas celebrated in January include the Black Nazarene, Ati-Atihan, and the Sinulog.

Facebook Twitter Copy URL
Copied
The Nazareno, Ati-atihan, and Sinulog every January have become an intermingling of religious and secular traditions

MANILA, Philippines – Fiestas are a core part of Filipino culture. They celebrate a good harvest, give thanks for a new year, and pray for blessings from the saints.

Although fiestas were originally put together by Spanish colonizers as a means of subjugating and converting what they considered a pagan nation that was the Philippines, locals have turned them into their own intermingling of religious and secular traditions.

In fact, many of these fiestas are mounted by Catholic parishes in close coordination with local governments. Most times even, it is the local governments that already take the lead in mounting the activities.

Every year in January, there are at least three such fiestas with religious beginnings that have become a tradition celebrated even by non-Catholics.

The Sto. Niño of Aklan

The idea of fiestas has origins dating back to the Spanish colonial period as a way of bringing together scattered settlements under one area called reducciones.

These reducciones would force indigenous inhabitants to move to city centers set up by the Spanish in order to control the population.

The Spanish made use of theatrics in order to encourage people to move into these centers. The colors, ceremonies, and festivities enticed inhabitants to live in these reducciones.

The plan had clearly worked, as fiestas to this day attract tourists to watch and even take part in the festivities.

The Ati-Atihan festival of Kalibo, Aklan, is no exception, dating back to the 17th century as a religious feast dedicated to the Sto. Niño. In 2023, the fiesta runs from January 6 to 15.

While it still is a day of celebration of the child Jesus, the mainstay of the fiesta is the parades, or the Sadsad, where groups of participants dance along the streets of Kalibo. Devotion to the Nazarene

While locals were enticed to live in reducciones through festivities, religious orders such as the Augustinians and Jesuits used the increased attendance to preach and invite them to hear mass.

These religious sacraments would be grand, with gleaming vestments and carts decorated with flowers and lights, intended to sway the people to join in on the procession.

The feast of the Black Nazarene focuses on the Translacion or the transfer of the icon from its original church of San Juan de Bautista of Bagumbayan (now Luneta Park) to the Quiapo Church in 1787.

Devotees of the Black Nazarene would walk barefoot, following along the icon as it makes its way along the streets of Manila. The Translacion has not happened since 2021 due to the COVID-19 pandemic. A “walk of faith” was instead held on January 8, 2023, where devotees processed from the Quirino Grandstand to the Quiapo church. The songs and celebrations of the Sinulog

Ultimately, the plan to bring tribes and villages together under a common tradition worked. The community’s identity is deeply rooted in its traditions, and, in turn, in the festivals that they celebrate.

Fiestas were then – and still are – community-wide efforts to finance, plan, and organize the event.

The Sinulog festival in Cebu, in honor of the Sto. Niño, is considered to be the grandest fiesta of the year, attracting millions prior to the pandemic. In 2023, its grand celebration is scheduled to happen on January 15.

A gift to newly-Christened Rajah Humabon and his wife Hara Amihan, the 500-year image of the child Jesus is currently on display in the Santo Niño Chapel of the Basilica Menore de Santo Niño in Cebu. (FAST FACTS: Things to know about Sinulog)

One of the highlights of the fiesta is the parades, which were originally organized by David Odilao Jr. in 1980. Festivals soon after were organized, in partnership with different Cebuano sectors.

The Sinulog is now synonymous with not only its religious origins (as in its processions and masses) but also with grand, secular festivities.