The next PNP chief after Eleazar: A list of contenders NEXT PNP CHIEF. Who is the next PNP chief who will replace Police General Guillermo Eleazar?

Facebook Twitter Copy URL
Copied
Interior Secretary Eduardo Año, who oversees the PNP, has submitted to President Duterte the names of five high-ranking cops to be the next PNP chief

The sixth PNP chief to serve under President Rodrigo Duterte, Eleazar has focused on internal cleansing, which sought to rehabilitate the image of the police and bring back public trust in law enforcers.

The outgoing PNP chief has also introduced the use of Quick Response (QR) codes for those applying to become police personnel across the country to avoid “palakasan” or a backer system.

Under Eleazar’s watch, the PNP and the Philippine Drug Enforcement Agency signed unified guidelines for drug operations to avoid “misencounters” between the two “competing” agencies from happening again.

On November 3, Interior Secretary Eduardo Año, who oversees the PNP, said he had submitted to the President the names of five high-ranking cops to be the next PNP chief, according to a PTV report.

The President has the prerogative to appoint somebody who is not on Año’s list, as as long as he or she holds at least the rank of brigadier general.

Below is the list of possible contenders to lead the 220,000-strong PNP:

Major General Vicente Danao, chief of the National Capital Region Police Office, is one of Duterte’s most trusted policemen, having served as the Davao City police chief during Duterte’s term as mayor.

Before being named as Metro Manila police chief, Danao was director of Calabarzon police. He also headed the Manila Police District for five months, from May to October 2019.

If his post as NCRPO chief is any indication, Danao has a good chance of being picked as the new PNP chief. Former PNP chiefs like Oscar Albayalde, Camilo Cascolan, Debold Sinas, and the outgoing Eleazar were former NCRPO directors before they were appointed to the top post.

Danao is a member of the Philippine Military Academy (PMA) Sambisig Class of 1991. He is slated to retire in August 2023.

Before heading the CSG, De Leon served as the Central Luzon police chief. In 2019, De Leon also headed the Central Visayas police, replacing Sinas. Prior to that, he served as the chief of the PNP Firearms and Explosives and Mindanao police deputy regional director for operations.

A native of Cagayan Valley, De Leon is a member of the PMA Makatao Class of 1989. De Leon will retire in May 2023.

Major General Rhodel Sermonia, the current chief of the PNP Directorate for Operations (DO), was accused by Senator Panfilo Lacson – a former PNP chief – of misuse of anti-insurgency funds last August. 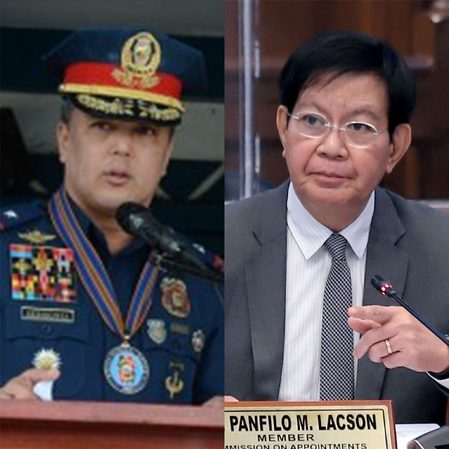 Before that, in August 2020, Sermonia was sued by Mayor Arvin Salonga of San Antonio, Nueva Ecija, after Sermonia sacked the San Antonio police chief. According to the mayor, the removal of the local police chief affected the enforcement of quarantine measures in their town.

A month after the filing of the case, the town mayor survived an assassination attempt. The town mayor alleged that Sermonia was the mastermind behind the attack.

On Friday, November 5, a fake photo of an invitation to the PNP Change of Command Ceremony circulated. The photo stated that Sermonia would be appointed by Duterte as the next PNP chief by November 12.

Sermonia denied the post, and said it was fake: “This is to inform the public that this post never came from us. It is malicious and we take offense from whoever orchestrated this. We believe this is the work of saboteurs who wish to put malice on the President’s upcoming appointment of the new Chief PNP.”

The PNP also announced on Friday, November 5, that the PNP Anti-Cybercrime Group was tasked to investigate the false news.

Sermonia also belongs to the PMA Makatao Class of 1989 and will retire in January 2024.

If seniority and succession would be followed, Lieutenant General Joselito Vera Cruz should be the next PNP chief after Eleazar.

He rose from the ranks. Before his stint as the TDCA, Vera Cruz served as the deputy chief for operations, the third in command. He also served as the commander of the Joint Task Force COVID-19 Shield, which enforces the government’s health protocols.

He was also once the top 4 cop after his designation as the PNP chief of directorial staff. Vera Cruz also served as the chief of the PNP Directorate for Information and Communication Technology Management and as chief of the Integrated Police Operations in Western Mindanao.

Vera Cruz belongs to the PMA Hinirang Class of 1987, along with Sinas and Eleazar. If chosen as the next PNP chief, he will only serve for four months because he will retire in March 2022.

Lieutenant General Israel Ephraim Dickson is currently the deputy chief for operations, the third in command.

Prior to being cop number 3, he was the fourth in command, serving as the chief of directorial staff. He once headed the Directorate for Integrated Police Operations-Northern Luzon.

Dickson also served as the director of the PNP Cordillera, where he beefed up the region’s campaign against insurgency. He was also one of the top officers who handled the case of PMA Cadet Fourth Class Darwin Dormitorio, who died of hazing inside the military campus.

Like Vera Cruz, Dickson belongs to the PMA Hinirang Class of 1987. However, Dickson has only four months left before his retirement in March 2022. – Rappler.com