Senate to start 2021 budget bill homestretch: What are the steps? 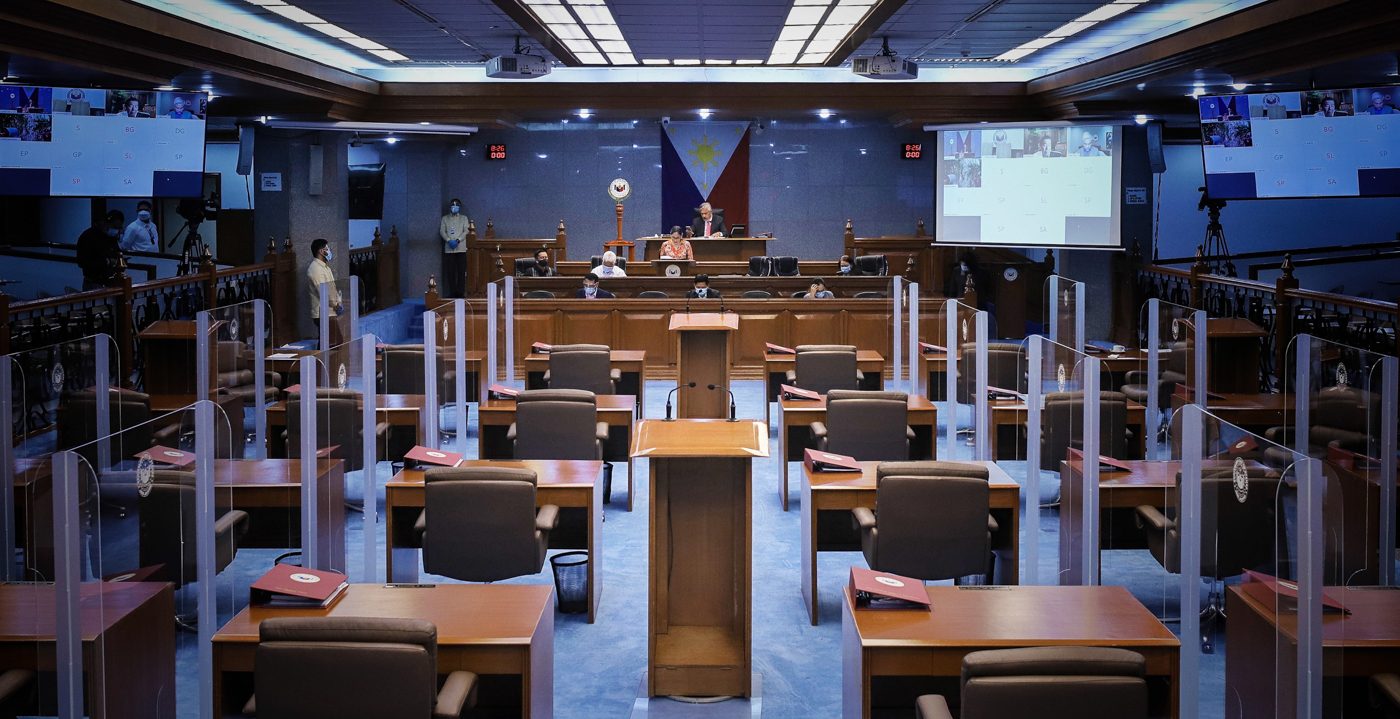 Facebook Twitter Copy URL
Copied
After pushing to receive the proposed 2021 budget bill on schedule, senators will take their time scrutinizing it, because the only thing worse than a reenacted budget is a corrupt budget

It happened before. In late 2018, Congress went into a deadlock over the proposed national budget for 2019, forcing the country to run on a reenacted 2018 budget.

The result? GDP growth fell to a 4-year low of 5.6% in the first quarter of 2019, and some 420,000 of the poorest Filipinos missed opportunities for advancement.

Imagine this happening again in 2021, with the coronavirus still at large and the economy already reeling from losses in 2020. Several senators said the consequences would be disastrous.

The yearly national budget is defined by a law – the General Appropriations Act – bespoke for the country’s needs in the year it covers. Reenacting the previous year’s budget is like a growing child putting on clothes she has outgrown.

This is why the Senate had been vehement about staying on schedule with the budget process when a leadership squabble at the House of Representatives threatened to hold the 2021 budget bill hostage for an entire month.

After some back-and-forth with the new House leadership, the Senate finally received the House version of the 2021 General Appropriations Bill (GAB) on October 27. This gave senators enough time for their preliminary work so they can take the GAB up in plenary as soon as they come out of a monthlong recess.

Congress will resume session on Monday, November 9. On Tuesday, November 10, the Senate committee on finance plans to sponsor its committee report – its preliminary version of the GAB – in plenary, according to committee head Senator Sonny Angara.

This will set off the homestretch for this year’s budget process, but it will be an uphill climb to ensure the GAB will be passed and signed by the President before the year ends.

Here are the hurdles – and possible obstacles – ahead:

For more than two months before November 9, senators who lead 11 subcommittees of the finance committee held hearings on the proposed budget of every government agency. This came to a head when they received the House’s version of the budget bill, on which they would base their preliminary version of the GAB – the committee report.

For the rest of November and possibly well into December, the senators will thresh out every item on every agency’s budget on the plenary floor.

Marathon sessions are expected, as the senators have expressed their reservations on many items on the budget bill.

For instance, Senator Panfilo Lacson is set on rectifying the Department of Public Works and Highways’ (DPWH) proposed P666.5-billion budget, which he called “mangled…beyond recognition.” He plans to weed out hundreds of billions of pesos in lump sums and tens of billions in what he called “rehashed” items from the 2020 budget.

With questions about these items’ legality under the pretext of reallocations sanctioned by the Bayanihan Law to address the COVID-19 pandemic, the discussion on the DPWH’s budget alone will certainly be contentious.

The Senate is also expected to rearrange the budget bill’s priorities. Several senators said they would push for higher allocations for health, social welfare, and agriculture in 2021. They noted the inadequacy of the current proposed budget for the Department of Health in light of the pandemic.

The 2021 GAB, when printed, amounts to several thick books resembling old telephone directories. Going line by line, one gets an idea of how tedious plenary debates on the budget bill will be.

The Senate is expected to pass its version of the 2021 GAB in early December. Select members of the Senate and the House will then convene as the bicameral conference committee. Their job will be to reconcile differing or conflicting provisions in their versions of the GAB to produce a single, unified bill.

This will be another potentially contentious process. House lawmakers will want more funds for projects in their districts, and will likely resist cuts by senators who will have a more national perspective.

If all goes well, the bicameral conference committee – the “bicam” in congressional parlance – will be able to agree on a unified bill, which they will then take back to their chambers for ratification.

Barring any issues or disagreements, the Senate and the House will then separately ratify the unified bill, which will then be called the “enrolled” budget bill.

This is the proposed measure Congress will submit to Malacañang for further study and approval by the President – if the President and his advisers find no issue.

Studying the enrolled GAB is not an overnight read, and Malacañang will need a few days to sift through the voluminous bill before the President can sign or veto it.

By this time it would at least be the middle of December. Usually, Malacañang does its work on the GAB over the holidays, and the President signs it into law just days before the new year.

President Rodrigo Duterte signed the 2020 national budget into law on January 6, 2020. By then, the government had run on a reenacted 2019 budget for a few days.

The President may veto the entire budget or parts of it. In the case of the delayed 2019 budget, Duterte vetoed P95.3 billion worth of items in the DPWH budget. It was already mid-April 2019, and the national budget was already delayed by more than a quarter.

Already delayed when it was still with the House, the 2019 GAB was further sidetracked when several lawmakers complained of “pork-like” insertions in the proposed budget. This prolonged the bicam process. Post-bicam revisions by the House stalled the budget even more.

For the 2021 GAB, Lacson, Senate Minority Leader Franklin Drilon, and other senators said they would not skim over or let slide anything questionable in the proposed budget.

Even when the House speakership debacle threatened to delay the budget process, several senators said they would not forego tedious scrutiny just to hurry the budget bill along.

Lacson, Angara, Drilon, and Senate President Vicente Sotto III pushed the House to hand over its version of the 2021 GAB early enough so the Senate can do its work on the budget properly. The goal is to pass it on time, yes, but it has to be an airtight measure suitable to the country’s needs.

Although reenacting the previous year’s budget would be highly undesirable, these senators said passing a budget with open leaks for corruption would be worse, and that’s why they’d rather take their time scrutinizing it. – Rappler.com