After decades in service, Lieutenant General Guillermo Eleazar was finally named as the next highest ranking officer in the 220,000-strong Philippine National Police.

The newly-appointed top cop will replace the controversial Police General Debold Sinas who will retire on May 8.

Eleazar is the 6th PNP chief under the Duterte administration.

He was chosen by the commander-in-chief, President Rodrigo Duterte, “based on seniority, merit, service reputation and competence to lead the police force,” according to Interior Secretary Eduardo Año who supervises the police force.

But who is Eleazar and what makes him qualified to be the country’s top cop.

From QCPD to Calabarzon to Crame

Eleazar was the former chief of the Quezon City Police District (QCPD). Under his leadership, the QCPD garnered high trust ratings in surveys conducted in February 2018 by then-PNP Chief Oscar Albayalde to assess the performance of police units.

Eleazar was also credited for coining the district’s tagline: “Proud to be QCPD.”

He later became regional director of Calabarzon in April 2018, before he was brought back to NCR.

He returned to Metro Manila in June 2018 to lead the National Capital Region Police Office.

LIST: Who will be the next PNP chief after mañanita cop Sinas? 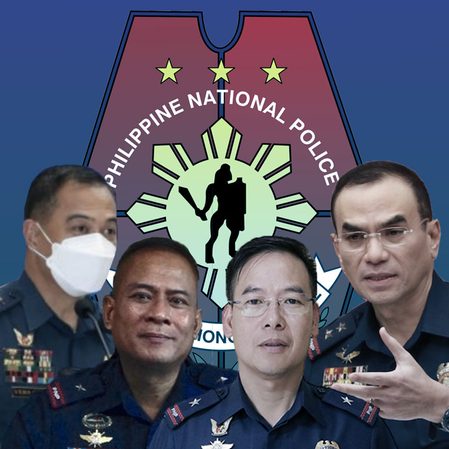 His term as the NCRPO director was marked with unusual acts and charm that gained him popularity.

In March 2019, he confronted a cop who allegedly extorted money from the family of a drug suspect.

Eleazar apologized for the outburst, saying he could not control himself because of his anger over what the cop did. He said that cops should not be “treated as babies,” especially since he has repeatedly warned them to stop engaging in illegal activities.

With his recent appointment as the PNP chief, Eleazar said he was ready to accept the challenges that come with it.

“To be appointed as the Chief PNP is a rare opportunity, but comes with the challenges of good leadership and meeting the high expectations of the Filipino people. I accept these challenges,” Eleazar said.

Eleazar’s career continued rise when he was installed in January 2020 as the PNP deputy chief for operations, a post considered as the number 3 cop.

He was tapped to be the commander of the Joint Task Force COVID-19 Shield, overseeing law enforcement all over the country during the pandemic.

In 2020, he was also on the list of police officers who were considered to replace then-PNP chief Archie Gamboa. However, Duterte picked then-NCRPO director Sinas.

Eleazar moved up another step in the police hierarchy in September 2020 when he was named the PNP’s deputy chief for administration, the second highest-ranking police officer in the country.

Eleazar will serve for only half a year. He is retiring on November 13.

It was actually an open secret that Eleazar shared a good relationship with his former boss Albayalde.

When Eleazar was the QCPD chief, Albayalde was the director of the NCRPO. Eleazar earned praises from Albayalde, who once said that other police regional directors should emulate Eleazar.

Eleazar belongs to the Philippine Military Academy (PMA) Hinirang Class of 1987, along with Sinas.

Sinas’ appointment last year paved the way for the rise of the 1987 Hinirang Class to vital positions in PNP.

At present the 3 highest officers in PNP are from the 1987 Hinirang Class. These are Eleazar, PNP deputy chief for operations Lieutenant General Joselito Vera Cruz, and Lieutenant General Israel Ephraim Dickson, commander of the chief directorial staff of the PNP.

Because Eleazar will only serve for 6 months, this means Duterte will be able to appoint another PNP chief before his term ends in 2022. One of the names touted to be Eleazar’s successor is incumbent NCRPO Director Brigadier General Vicente Danao.

Danao is considered a Davao boy. He was Davao City police chief just before then Mayor Duterte moved into Malacañang. Danao is set to retire in 2023. – Rappler.com