(Editor's Note: This is third of a 4-part special report on sin taxes.)

MANILA, Philippines - When the sin tax reform bill is compromised, so are health care plans for the poor.

This is because under the proposed bill, about 85% of annual incremental revenues from excise taxes on so-called sin products—tobacco and alcohol—will go the government's universal health care (UHC) program.

If lower taxes on the products are adopted, a large portion of the investment the program planned for the upgrade of public hospitals, which cater primarily to the poor, will not push through.

Worse, it's possible that the number of poor families that were promised health insurance under the program will not be “fully covered.”

The Senate, through the ways and means committee chaired by Ralph Recto, appears bent on further watering down the measure that had already accommodated compromises in the House of Representatives.

The original version of House Bill (HB) 5727, authored by House appropriations committee chair Joseph Emilio Abaya, was projected to generate for government P60 billion in the first year of implementation. But what the House eventually passed cut the revenues to practically half, at P31 billion.

With lower revenues, funds for the UHC will also be reduced.

“What we plan to spend on UHC will be reduced significantly,” said Department of Finance (DoF) Assistant Secretary Teresa Habitan.

The same is true for funds that will go to tobacco farmers. The remaining 15% of the revenues from the bill will be used to assist tobacco farmers in shifting to viable, alternative crops.  “[The funds for farmers] will also be lower,” Habitan said.

However, under the amended bill, only P26.64 billion will go to the UHC, and P4.70 billion to tobacco farmers—down by nearly 50%.

As a result, the UHC may not be able to roll out the health expenses it had planned.

A vital program promised by President Benigno Aquino III to help reduce poverty in the country, the UHC aims to ensure that Filipinos, especially the poor, are given financial protection against illnesses mainly through enrollment with the Philippine Health Insurance Corp. (Philhealth), giving them medical benefits and minimizing their out-of-pocket expenses.

It also aims to improve and modernize the facilities and equipment of government hospitals.

Philhealth chief operating officer and former health undersecretary Alex Padilla told Rappler that of the total 10.7 million poorest families, only 5.2 million—those who belong to the “first quintile” with an income of below P3,460 a month—are now being subsidized by government.

The remaining 5.5 million—belonging to the “second (P6,073 income/month) and up to the third quintile” families—were targeted to be covered by revenues from the original sin tax bill. The third quintile represents those “who are also considered poor but with businesses of their own or employed in the informal sector.”

However, under the amended bill, Padilla said: “We may not be able to fully cover [the 10.7 milion families]. It depends. P30 billion may not be enough.”

Padilla said that the funds for the UHC will be divided between Philhealth, for the premium subsidies, and the Department of Health (DoH), for the upgrade of hospitals.

“The priority is Philhealth,” said Padilla. “Depending on the how much the revenues will be, we will adjust our own figures accordingly.”

Even if, say, the Philhealth subsidies for the poor will be fully covered, public health care in the country will continue to suffer due to the long-delayed modernization of government hospitals.

In an administrative order on the Aquino administration's health care agenda that he signed in December 2010, DoH Secretary Enrique Ona said “poor Filipino families have yet to experience equity and access to critical health services.”

Without providing statistics, Ona noted that “public hospitals and health facilities have also suffered neglect due to the inadequacy of health budget in terms of support for upgrading to expand capacity and improve quality of services.”

A study by Rouselle F. Lavado et al of the Philippine Institute for Development Studies attempts to provide an overview of the hospital sector in the Philippines, with emphasis on hospitals being managed by the DoH.

According to the study, the share of allocation for DoH-retained hospitals in the total DoH budget has been declining. From the previous 66% (P5.37 billion) recorded in 2003 to 2006, it declined to 35% (P4.304 billion) in 2008. “This change reflects a shift in the priority of DOH from personal health care to public health programs,” the study said.

The study also showed that payments to hospital personnel comprised the largest share of hospital budget, while there has been a steady decline in the share of Maintenance and Other Operating Expenditures (MOOE) and Capital Outlay, which is used primarily for the purchase of hospital equipment and infrastructure.

MOOE's share declined from 44% in 2000 to 32% in 2008. Capital outlay, on the other hand, had been zero from 2001 to 2006, due in part to austerity measures imposed amid a fiscal crisis at that time. “Capital outlay was only distributed to all hospitals in 2007 but such distribution was scaled back in 2008 with only 13 hospitals receiving CO appropriations,” the study said.

It added that “poorer regions are not receiving higher hospital subsidies.” In terms of poverty incidence, the Autonomous Region of Muslim Mindanao (ARMM) ranked the highest, but it received the least amount of subsidy allocation for its DoH-retained hospitals.

Bulk or 50% of the total DoH hospital budget went to Metro Manila, followed by Central Luzon (5.9%) and Western Visayas (5%), according to the study. The poorest regions—ARMM, Caraga and Region VIII—received 0.1%, 1.6% and 1.9%, respectively.

If he had his way, Padilla said he would still go for the original version of the bill.

“It is not only a revenue issue, but a health issue as well,” he said, stressing that the poor are the most vulnerable to the burden of tobacco and alcohol use.

Padilla said the scarce resources the poor spend to buy these products could have gone to basic necessities such as food, education, and health care. He added that the poor are burdened more when they are inflicted with the diseases linked to the use of these products.

Ona sang the same tune in an August 16 Senate hearing. He said that aside from incremental tax revenues, the sin tax bill would markedly reduce health costs stemming from the diseases.

Ona said that for diseases caused by smoking alone, medical expenditures in the country reached a staggering P177 billion in 2011. He pointed out that this was way below the P26 billion taxes collected from cigarettes.

“In the Philippines, the top 4 killers of our people are diseases related to smoking: ischemic heart disease, strokes, emphysema and cancer of the lungs, trachea and the gastrointestinal tract,” he said. 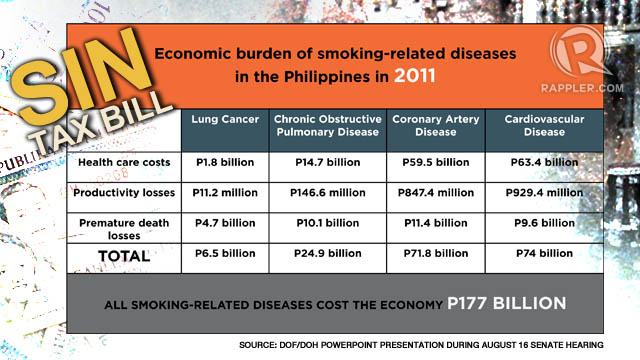 Dr. Antonio Dans of the University of the Philippines College of Medicine, meanwhile, gave a higher estimate for smoking's financial burden on the economy.

He said smoking-related diseases have cost the economy P188.80 billion in terms of health care costs, productivity losses and premature death losses in 2011.

“But this is actually an underestimate,” he told a forum in UP Manila on September 19, noting that in computing, they used basic wage and Philhealth expenses only; ignored the effects of passive smoking, and effects of smoking on children and pregnant women, among others.

The dilution of the sin tax bill was due to dynamics of politics and strong lobbying of the affected industries.

The Abaya bill in the House originally sought to replace the current 4-tiered system of taxing tobacco and alcohol with a unitary one, and index the rates to inflation starting immediately.

The House eventually passed the measure, but revised it to provide for 2 tiers for tobacco (and 2 tiers for fermented liquors and 3 tiers for distilled spirits). Indexation will no longer be against annual inflation starting immediately, but a fixed 8% every 2 years starting 2015.

These cut the projected revenues by half.

The revenues to be raised under the 2 versions of the bill are as follows: 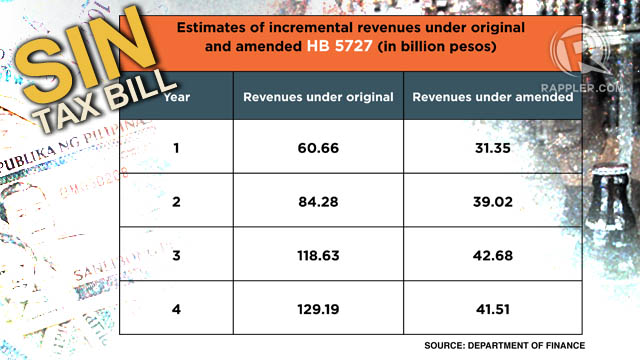 Finance and health officials are still pushing for the P60-billion bill, however. Because more important than the additional revenues it will raise, they said, is the reduction in consumption and cases of “sin”-related diseases it will bring. - Rappler.com