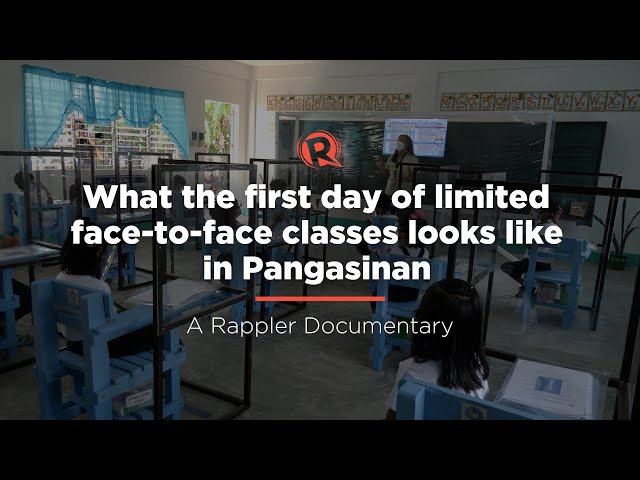 Facebook Twitter Copy URL
Copied
Rappler producer Nick Villavecer followed the journey of two families and a teacher in Sitio Longos in Alaminos City, Pangasinan to understand what the opening of limited face-to-face classes in their area means to them

PANGASINAN, PHILIPPINES – The first day of school at Longos Elementary School in Sitio Longos, Barangay Pangapisan on November 15 felt  like a reunion of sorts.

Children like Issa Bautista and Ivan Gutierrez, Grade 2 and Grade 3 students respectively, woke up early for this special day. After nearly two years, they could finally wear their school uniforms to physically meet their classmates and teachers.

Issa and Ivan were only two of the 40 grade school students in Sitio Longos who attended the pilot run of limited face-to-face classes – the first of two batches. Wearing their face masks and face shields, they attentively listened to their teachers’s lessons.

This is the imagery of education in the new normal. Inside the classroom, plastic barriers separate the learners and the teachers – one meter apart. It’s a preview of what’s to come for thousands of other Filipino students in the country who have yet to physically go back to school.

Longos Elementary School is located in a far-flung community in Alaminos City. Surrounded by salt farms and fish pens, it was precisely because of its location that it was selected as one of the 100 public schools that have been allowed to reopen.

Inaccessible by car, visitors have to walk for around 1.5 kilometers or ride a habal-habal or motorcycle to go here. During high tide, residents ride a small boat to go in and out of the sitio.

Rappler visited the community during the opening of limited face-to-face classes, where we met some parents and children who excitedly looked forward to this historic day. After all, the Philippines is the last country in the world to reopen its schools.

There is a common thread among parents in Sitio Longos: Many of them have not finished school. Issa and Ivan’s parents, for example, only completed high school and elementary school. After that, they took up jobs as fishermen, fish vendors, and salt makers.

The little education they had made it very difficult for them to process their children’s learning modules during the height of the pandemic. They ask the same question: How could I teach my children something I barely even know?

In this video, we followed the journey of two families and a teacher in Sitio Longos to understand what the opening of limited face-to-face classes in their area means to them. – Rappler.com