Last year, I asked Janina Vela in an interview why the youth in the Philippines were not marching on the streets. President Duterte was on his fifth year, presiding over thousands of extrajudicial killings of drug suspects and the erosion of democratic freedoms – yet there seemed to be stony silence from the young people.

This question roamed in my head as the world watched students and young people lead sustained protests in Hong Kong in 2019 – despite the firing of teargas and violent dispersals by the police. A year later, students massed on the streets of Bangkok demanding reforms in their constitution and the monarchy. Earlier, a youth-led political party, Future Forward, was born, unexpectedly winning seats in parliament. (They have since regrouped into Move Forward.)

“What I noticed is that we’re just starting, we’re in the rude awakening phase,” Vela replied in the interview for the podcast, “The Great Asian Pushback.” “It’s sad that it took a pandemic for us to have this political awakening.” (You can listen to the interview here.)

Vela, 22, is a content creator, a social media influencer with her own YouTube channel which has a huge following. She is known to speak her mind on social and political issues, adding range to her beauty-regimen vlogs. Last year, she was active in a youth-vote campaign and recently, she participated in the political rallies of presidential candidate Leni Robredo as one of the emcees.

She continued: “I’m very proud of my generation so far, no doubt. A lot of us don’t realize the value of our rights until they’re taken away from us. We don’t see the privilege we have until it’s gone – and that’s something that we’ve seen in the last two years. This has pushed the youth to start to move slowly because it’s systemic.”

There it is, a slow-burn awakening that has led young people to get involved in something constructive, performing their civic duties in various forms of campaign for Vice President Robredo. It has become a common observation that Generation Z and Millennials compose anywhere from half to about 80 percent of the pink rallies in Metro Manila and the provinces, giving these a festive air.

By choosing to be in this camp, they are voicing their hope for change and, at the same time, showing dissatisfaction with the current regime and those who promise to continue it. Their vehicle for protest is the election campaign, inspired by a leader who has awakened the fight in them. They sweep through barangays and engage in house-to-house conversations, compose songs, sing and dance their hearts out, paint murals, make placards with distinct and funny messages, act as marshals in rallies, distribute snacks, and conquer TikTok with their videos.

They, those between 18 and 30 years old, are among the 32.7 million registered voters, making up half of the total of 65 million. If we include those up to 41, the number of voters goes up to 37 million. “They are more than enough to determine the outcome of the elections in May,” wrote Jayeel Cornelio, a sociologist and professor at the Ateneo de Manila University.

Baby boomer friends and I have been discussing this burst of youth involvement in the election campaign, rich in spontaneity. Grim-and-determined rallies seem not to be in their playbook. Someone who witnessed the student activism in the 1970s commented on Facebook that the pink rallies remind her of the First Quarter Storm – but with a big twist. There’s joy and humor instead of anger; a liberating rather than oppressive feeling.

But not all is upbeat about our young. Here’s a reality check: Pulse Asia, in its February survey, found that seven out of 10 of the country’s youngest group of voters or Generation Z want Ferdinand Marcos Jr. to be president. Theirs was the age group with the highest preference rating for Marcos Jr.

Will we see a shift in these numbers for Robredo as election day draws nearer? Can’t wait to find out.

In this concluding part of the newsletter, I want to introduce you to an adventure that blends the old (me) and the new (Tiktok). For some reason, the online world came up with a new term for a “gossip,” a “tsismosang kapitbahay,” and it happens to be my name. So when colleagues in Rappler were urging me to popularize stuff in my newsletters through short videos, they came up with the title, “Hindi ito Marites,” a funny play of words. You can watch the first episode here. 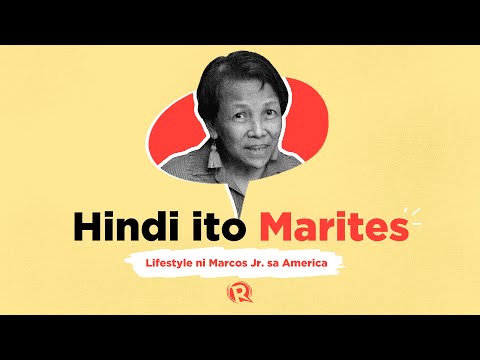 We’re starting with a limited series that is focused on the frontrunner in the presidential race – to present the facts – as what a journalist does. We in the media shouldn’t be defeated by lies. We have to push back with our armor of facts. “Hindi ito Marites” is one such effort, a pebble that we hope will create ripples in the river of our election campaign.