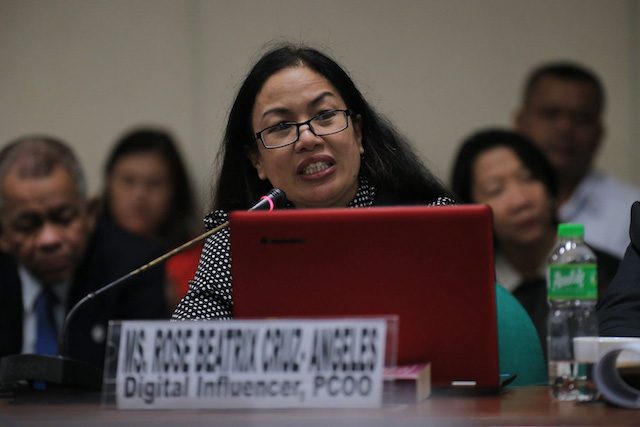 In a warped world where propaganda is the “new journalism,” Philippine newsrooms brace themselves for a wild ride ahead, where professional journalists are elbowed out in press events by bloggers and vloggers who served as the backbone of the Marcos campaign’s massive social media network.

There is no better indication of this than the appointment as press secretary of one of the vlogger-campaigners herself, Trixie Cruz-Angeles – to the consternation, we heard, of one columnist who practically groveled at the feet of Marcos Jr. On Wednesday, June 1, Angeles gave us a peek into what the Malacañang press room would look like: it will cease to be the domain of journalists from print, broadcast, and online media.

She said she would push for bloggers’/vloggers’ accreditation and access to cover the events of president-elect Ferdinand Marcos Jr. Incoming executive secretary Vic Rodriguez added in one interview that he considers them as already part of mainstream media.

This is no surprise.

Even under the administration of then-president Benigno Aquino III, there was an attempt to grant bloggers access to cover Malacañang, but the Malacañang Press Corps (MPC) put its foot down, raising the issue of accountability – because while reporters were accountable to their media companies, who were the bloggers answerable to?

It was the outgoing Duterte administration that started legitimizing vloggers by giving them not just access to presidential events, especially foreign trips, but also consultancies and fat allowances. A prominent vlogger, Mocha Uson, was also named assistant press secretary.

The context changed, too: bloggers and vloggers turned disinformation into news, and they grew in scale, wealth and influence because of it.

We’ve done a few deep-dives on them:

After Duterte became president, the foul-mouthed RJ Nieto (aka Thinking Pinoy) would go live on his Facebook page to address the “fucking Malacañang Press Corps (MPC).” You’re “sons of bitches,” he would say to his camera.

I was once a member of the MPC as a rookie reporter for the Inquirer covering Cory Aquino’s presidency. As I write this I imagine the Marcos propagandist Nieto saying fuck you to my face, too, but I digress.

We were referred to as the brat pack for the simple reason, I guess, that we were seen as brats who demanded a lot from Malacañang: regular access to then-president Aquino; regular briefings with her spokespersons; visits by Cabinet secretaries to the press room for background information on new policies; easing of security restrictions from the Presidential Security Group, etc.

Once a week before every Cabinet meeting, we would be up early waiting by the door to the venue of the meeting, choosing vantage positions for our ambush interviews. On a lucky day, we were able to “ambush” all the senior Cabinet officials and get them to talk before and after the meeting. Once, Malacañang imposed a ban on the wearing of jeans when covering President Aquino, which, of course, sparked a war that the brats eventually won. We also elected our MPC officials who set such high standards that they demanded prior grammar edits of the questions we would ask Ms. Aquino during her press conferences. No, the MPC would not be embarrassed for asking ungrammatical questions.

So what’s so wrong with deploying vloggers to cover the President as well?

If we’re talking about the same vloggers who served as attack and lapdogs for Marcos, then the answer is obvious. Imagine getting your own PR machinery to list down questions which you yourself approved and want to be asked – at a “press conference” – by people on your payroll or in the orbit of your influence-peddling universe. Which was how the Marcos camp essentially ran its media campaign.

So it’s hard to see this any other way. The Marcos vloggers are the new state propaganda machine, united behind a single goal: sustain the Marcos narrative that got him to Malacañang, fan more hatred toward journalists and ease them out of the power corridors, and enthrall the public with their own versions of scoops and inside stories and selfies with the high and mighty. Their body of work shows unparalleled talent in vitriol, fakery, sycophancy – aided by Mark Zuckerberg and Apollo Quiboloy, a world that’s gone mad, and a president who adores them.

I’d be more than happy to be proven wrong.

In the meantime, I say to our dear colleagues, let’s harden our stomachs – for we have not heard the last “fuck you” in our lives!

Judgment Call: Above all, facts first