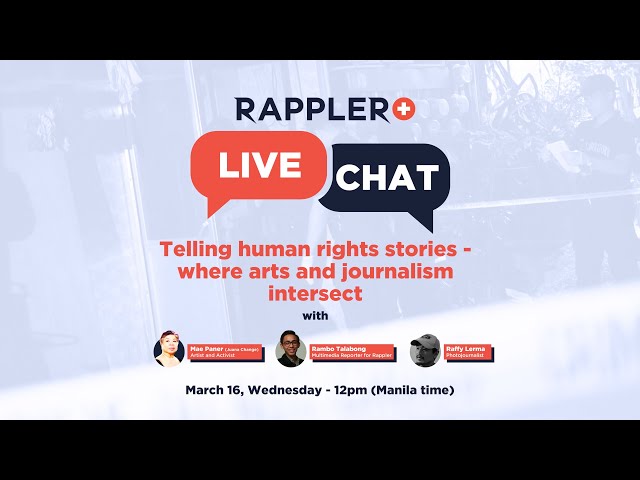 Facebook Twitter Copy URL
Copied
The challenge continues for journalists and artists alike: how do we continue telling these difficult and painful stories in a climate of hate speech, disinformation, and propaganda?

How do we tell stories about human rights abuses?

As an artist and activist, Mae Paner conveys them through theatre and film as we see in her piece “Tao Po” that features four character monologues. As a photojournalist, Raffy Lerma exposes them through the powerful images that he captures during his coverage. And as a multimedia reporter for Rappler, Rambo Talabong tells these stories through the news articles he writes and the multimedia content he produces.

In the film “Tao Po,” we hear Raffy Lerma say, “We’ve come to accept these killings as normal. That’s what I can’t take… I can’t accept that our society has come to this.” Journalists themselves have been caught in the crossfire of Duterte’s bloody drug war as they try and cover the scale and magnitude of the killings that started in 2016. Though killings have always been present in the country, Raffy Lerma, who has covered the night shift since 2007, points out how unusual it was to have seen so many killings in one night compared to how it was previously.

In her CCP talkback, Mae Paner recounts that she decided to produce this show after hearing daily reports of killings at the start of the drug war. She felt compelled to humanize these stories despite the difficulty of the subject matter, production costs, professional risks and personal attacks. As an artist, she brought these stories to life for the purpose of starting conversations with people who remain supporters of President Duterte.

In an interview with the International Documentary Association, Rappler’s Rambo Talabong says of journalism and documentary filmmaking: “I really appreciate the documentary process—how much importance is given to telling stories in a slow burn. At Rappler we break stories every day—five stories, seven stories, 500 words, we send them out, one after the other. While our process may be different, we are essentially doing the same thing as documentary. We’re here to portray the truth.”

The challenge continues for journalists and artists alike: how do we continue telling these difficult and painful stories in a climate of hate speech, disinformation, and propaganda? And more importantly, to ensure we remember and continue to remember these stories.

Bookmark this page to catch the Rappler+ Live Chat on March 16 (Wednesday), 12pm. Rappler+ members are invited to join the private Q&A that will follow by registering through this link. – Rappler.com

The madness of December