Here in the remote jungles of India's Manipur State bordering Myanmar, the pace of life can often feel languid. The forests have grown back where British and invading Japanese troops once engaged in hand-to-hand combat in World War II.

Amidst the lush hills is Churachandpur, a typical border town where shops – selling cheap Chinese clothing and other hardware – spill out onto the monsoon-drenched streets.

But the outward calm hides a lively underground economy run by wildlife traffickers and arms smugglers.

"There is hardly anything that you cannot get in Churachandpur," said a field officer from the Wildlife Crime Control Bureau (WCCB) who requested to remain anonymous, "from rhino horns to pangolin scales, or geckos to arms and ammunition."

Churachandpur's notorious reputation stems from its location on the border with Myanmar, but most of the wildlife ends up in China.

"There is hardly anything that you cannot get in Churachandpur, from rhino horns to pangolin scales, or geckos to arms and ammunition."

"Sometimes, drugs are also traded with animal parts. Drugs are pushed in through these routes to the Indian side with the help of militant outfits that frequent these routes," a retired Manipur police official told us.

The militants in India's northeast are also a source of arms and ammunition for smugglers in the region, we were told.

"The buyers normally come to Churachandpur or Dimapur in Nagaland," said an undercover wildlife agent. He is part of a special investigation team set up by the state government in 2008 to stop rhino poaching.

Not too long ago, rhino horns and tiger parts were most heavily trafficked through these routes, but increased global attention has reduced demand in China. Now, pangolins and other wildlife have taken their place, investigators said.

"This network first smuggled rhino horns, but it has diversified into pangolins, geckos, and other wildlife," said the agent, who has conducted regular sting operations.

"We have in recent times been able to stop the poaching of one-horned rhinos and smuggling of its horns," said a WCCB spokesperson. "But we have noticed a sudden rise in seizures of pangolins from the region."

"The recent increase in rescues indicates that there is a racket in smuggling out pangolins," said Rathin Barman, joint director of the Wildlife Trust of India and head of the Centre for Wildlife Rehabilitation Conservation (CWRC).

But the numbers of captured animals are still small. WCCB officers have confiscated 10 live pangolins in the past 3 years from northeast Indian states. The Assam State Zoo is caring for pangolins rescued from traffickers between January 2007 and July 2019. 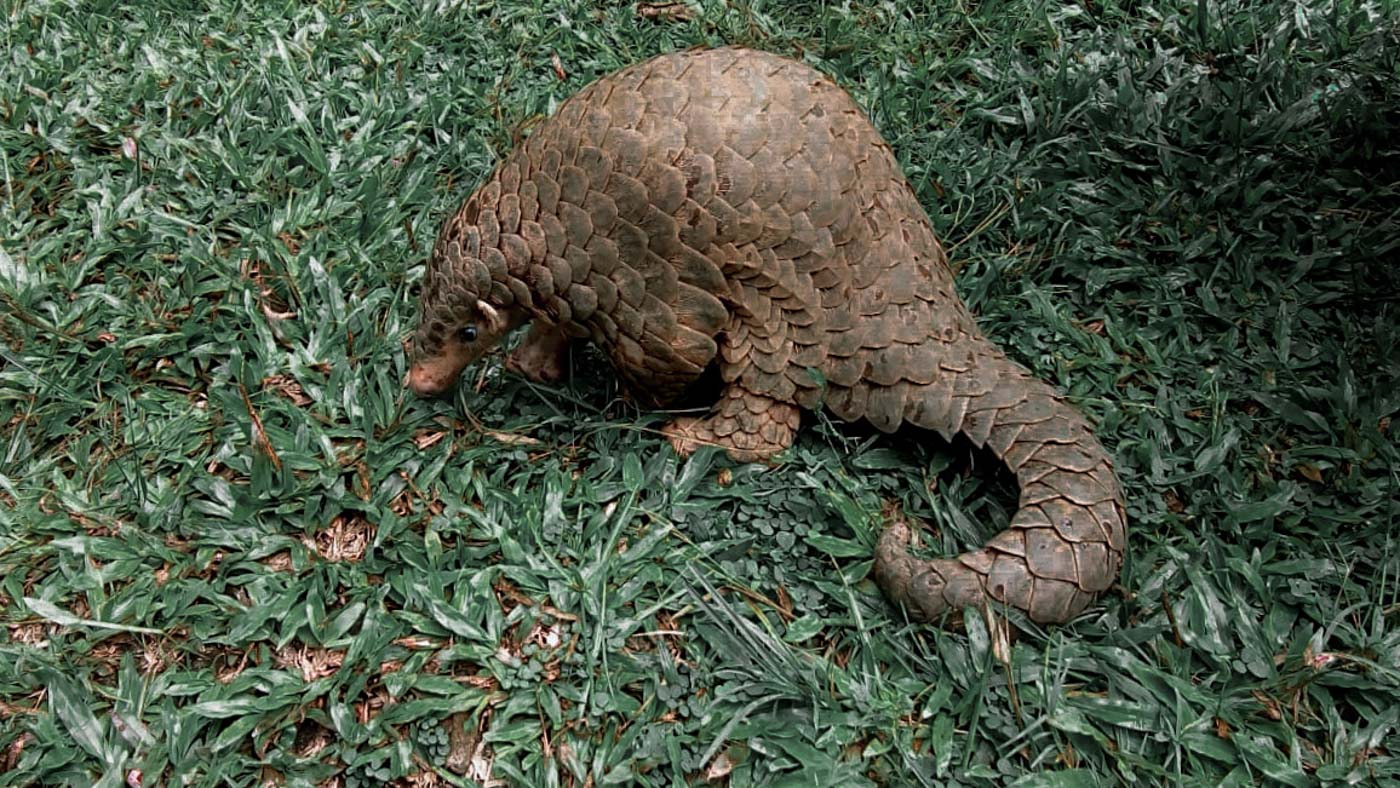 RESCUED. A rescued pangolin at the Centre for Wildlife Rehabilitation and Conservation near Kaziranga National Park in Assam, India. © Dauharu Baro / Wildlife Trust of India / International Fund for Animal Welfare

An additional 10 pangolins were also recently rescued from traffickers, who abandoned them to evade a dragnet operation by law enforcement agencies. In August, the CWRC found a dead pangolin in an abandoned bag at a bus stop in Upper Assam.

India, while not a consumer of pangolins, is a source country for Indian and Chinese pangolin subspecies. Farmers, traditional snake-charming communities like the Sapera, and the semi-nomadic Bawariyasin often sell the animals to the middlemen for up to 70,000 rupees, a local fortune that equals roughly US$1,000, the wildlife officers said.

The pangolins are then taken to Manipur State and smuggled across the border to Myanmar, and on to China, the officers said. (READ: Pangolin smuggling thrives as rhino poaching declines)

Pangolins are not the only Indian native animal facing massive threats to their survival. The tree-dwelling tokay gecko – erroneously believed to be a cure for cancer and HIV/AIDS, and said to fetch prices of up to one million rupees – is also being smuggled into China via the same routes.

"Even though the animals have protection status, rhinos and tigers get all the attention," said the Assam-based conservation activist Baibhav Talukder. "The punishment for poaching of rhinos and pangolins are similar, but our law enforcement agencies weren't as concerned about pangolins until recently."

"Wildlife trafficking should be seen as a national security threat and not merely the smuggling of animals," he said.

In March, two men aged 40 and 34 were intercepted at Tribhuvan International Airport in Kathmandu carrying 162 kilograms of pangolin scales in their check-in luggage.

The pair had picked up the scales in the Democratic Republic of Congo, transited in Istanbul, then attempted to transit again in Nepal on their way to Shanghai. They are now at the Nakkhu Jail on the outskirts of Kathmandu, where they are awaiting trial.

Their arrest was a watershed moment: It was the largest recorded seizure of pangolin scales in Nepal and the first haul from an African pangolin species. It led police to worry that Nepal has become a new transit point for pangolins heading to China.

Information extracted from their mobile phones revealed that they were communicating with Chinese wildlife smugglers via WeChat, a Chinese messaging and payment app. Investigations identified a Nepali, a Bangladeshi, and a Chinese accomplice. The 3 are still at large.

"This is a distinct case of international organized crime, but it is just the tip of the iceberg," said Birendra Johari of the Nepali police's Central Investigation Bureau. "Our investigations show that pangolins in recent times have become the most poached wildlife in Nepal."

Although Nepal lies on the traditional wildlife smuggling route between India and China, it has so far avoided the large-scale seizures seen in places like Singapore, Vietnam, and Hong Kong. The bulk of arrests to date involve small amounts of locally poached pangolins with no apparent connections to larger syndicates.

However, experts say they are concerned that this is changing. One reason is improving infrastructure. 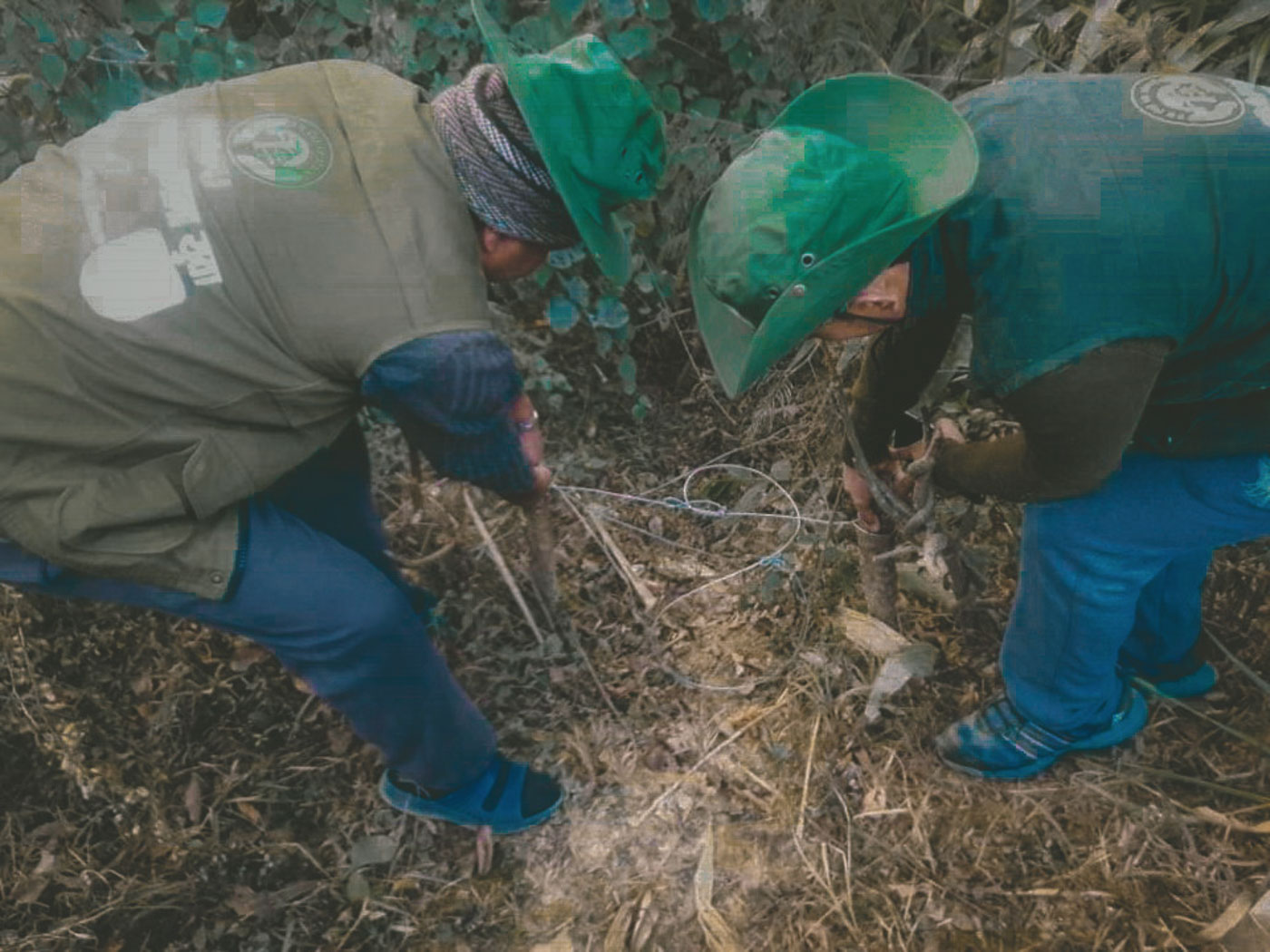 MOST POACHED. Members of a community-based anti-poaching unit removing animal snares in Kavre district, Nepal. Nepal has not recorded any major busts so far, but wildlife law enforcement experts say that pangolins have become the most poached wildlife in the country in recent years. © Zoological Society of London / Himalayan Nature

The reopening of the Tatopani-Kodari border crossing with China earlier this year after it was destroyed during the 2015 earthquake, the increasing use of the Rasuwa-Kerung border crossing, and the prospect of a new trans-Himalayan railway line could all make Nepal a more attractive transit point for traffickers. Police in the Dolakha district, bordering China, also speak of rising demand that has led to the near disappearance of the animal. (READ: Nepal-China connectivity aids wildlife smuggling)

"Nepal is already a signatory of China's Belt and Road Initiative, which could increase market access and trafficking of wildlife," said Kumar Paudel of Greenhood Nepal, a conservancy group, adding that pangolins from Africa, India, and Bangladesh were already being intercepted in Nepal en route to China.

Just 5 months before the arrest in Kathmandu, there was an almost identical case, in which two Chinese nationals were arrested smuggling suitcases full of pangolin scales from Congo.

Except this arrest was made, not in Nepal, but in Hong Kong.

Hong Kong has been a hotspot for shipping pangolin scales since 2014, with tons of container shipments seized from Africa, and smaller seizures by speedboat and individual smugglers arriving by air.

Although Traditional Chinese Medicine (TCM) still plays an important role in the territory – there are more than 7,100 licensed TCM medicines traders here – local dealers we met undercover told us that they were not interested in large amounts of scales because the local demand was just too small.

"The risks (of selling scales) compared to the profits are too high. It's not worth it," a shop owner told us, "this business is better in the mainland."

At the Lo Wu Correctional Institution, a prison, we found two small-time traffickers who were willing to discuss their actions.

The two Chinese women are serving time for attempting to smuggle some 110 kilograms of pangolin scales in 4 suitcases from Hong Kong International Airport to Macau by ferry, en route from the Democratic Republic of Congo.

One of them, aged 41, told us about her humble origins in China, her time in Congo, her plans to travel home to China and her arrest at the Hong Kong ferry terminal in August this year. Both are from the Guangxi region in southern China and asked not to be identified to speak more freely.

They said that a man they called Li Guangsheng had invited them to Congo to invest in beauty parlors last year. Li ran a construction business in Kinshasa, the capital, they said. "I was told that there are a lot of Chinese there and business was good," one of the inmates said.

Li hosted and provided for them during their one-month stay in Kinshasa from October to November last year, they said. Then Li supposedly asked them to take 4 suitcases to Macau, the gambling hub.

They flew from Kinshasa to Hong Kong through Casablanca, in Morocco, and Doha, a circuitous route they said was cheaper than a direct flight.

Their statements could not be verified, nor could contact information for Li be found.

The two women were caught at Hong Kong airport during a routine customs X-ray check. Their suitcases contained the scales of 302 pangolins, at a total weight of 110 kilograms, wrapped in tin foil bags. Prosecutors later estimated that the scales could be worth as much as $71,000.

When we visited them in pre-trial custody before their sentencing, both women claimed that they did not know what they had been transporting. "We thought it was dried seafood," one of them said.

They pleaded guilty and were sentenced to 16 months in prison for importing a protected wildlife product without a license.

The court heard the pair's case after new legislation passed in November 2018, increasing penalties for pangolin trafficking. Now, the crime is punishable with a fine of up to 10 million Hong Kong dollars, or roughly $1.3 million, and up to 10 years in prison.

During a visit after their sentencing, one of the two inmates changed her story. She said that she knowingly trafficked pangolins, but said that they did not expect to be jailed.

SCALES. These are the 110 kilograms of pangolin scales wrapped in tin foil that the women tried to smuggle through Hong Kong to Macau. © Hong Kong Customs and Excise Department

Li told them about the scales, she said. "He said if we got caught, he would pay the fine and we would be fine," she said. "We trusted him."

"I heard that someone bringing ivory for him was arrested in Hong Kong before," the inmate said, "but that the person was released after paying a fine."

Their case is not the only one. In mid-November last year, a man from China's Fujian Province was sentenced to 20 months in prison for smuggling 48 kilograms of pangolin scales from the Democratic Republic of Congo via Ethiopia to Hong Kong.

The two women are still serving time, spending their days washing dishes and cleaning floors at a prison kitchen. As soon as they are released, they plan to return home to Guangxi. "We will be sent to the border and then take high-speed trains to go home," said one, with a wry smile. (To be continued.) – Rappler.com

This is part of The Pangolin Reports' "Trafficked to Extinction," a global report investigating the illegal wildlife trade of pangolins across Asia, Africa and Europe.

TOP PHOTO: A pangolin rescued from traffickers in Vietnam recuperates at a rehabilitation center run by NGO Save Vietnam's Wildlife. Screenshot courtesy of Centre for Media and Development Initiatives.

More from this report: